BACK
Less Pressure This Time 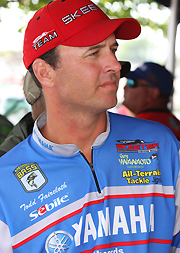 Consistency is Todd Faircloth's trademark – he finished no lower than 44th in any of the eight Bassmaster Elite Series events this year.

Todd Faircloth has two ways of looking at the upcoming Bassmaster Elite Series postseason that will determine the 2009 Angler of the Year (AOY). Without having experienced it yet, his opinion of it depends on which perspective he views it from.

"I'm not a big fan of the way the points structure is set up," said the Texan, who'll be one of 12 anglers competing for the title in Alabama beginning next week. "Like everyone else, I'm not real sure how it's going to work out. I feel like (the award) should be based on all of the events, and the way they're changing the points kind of takes away from that.

"Then again, it gives me a shot at it at the end of the year. And if I won it, or whoever wins it, I wouldn't look at it like it was diluted."

His circumstances are much different than last year, when the AOY winner was still determined by the most regular-season points. He led for much of the season and carried a 21-point advantage into the final event at Oneida, only to finish 93rd (his worst showing ever in the 4 years of the Elite Series) and watch Kevin VanDam snatch his fourth crown.

He admitted that when he got to Oneida last summer, he was bearing the strain of his quest to hold off the top angler in the game and claim the award that he and most of his peers covet more than any other. There's no such burden this time.

"Being in 5th place, I don't feel near the pressure I was feeling last year, that's for sure," he said. "I know I have to have two really good tournaments to have a shot at it.

"I probably need to win one of them. There are four guys ahead of me and seven below, and they're all very good fishermen. Somebody's going to have two great tournaments there, and I hope it's me."

Faircloth's 2009 season wasn't quite as spectacular as his '08 campaign, which included six Top 12s in 11 events and a victory at Amistad. Nonetheless, he was remarkably consistent again, placing no lower than 44 in any of the eight tournaments and advancing to the final day three times.

"All in all, I'm very pleased with my year," he said. "Anytime you get a check in every event and make a few Top 12s, you can't complain too much about that."

The highlight came at Alabama's Lake Wheeler in early April, where he managed a 9th-place finish (his best of the year) after a lackluster practice.

"I basically felt like I was in survival mode, but then conditions changed and I just kept exploring as the tournament went on, and I ended up getting on a solid deal. We had a big rain and the water came up. and a lot of the stuff guys were fishing got blown out or muddied up.

"I kept some stuff in the back of my head during practice, thinking that if the water came up, it should be good. That's what ended up happening, so it just worked out."

Faircloth has never visited Lake Jordan, which will be the site of the first of the two 2-day postseason events (Sept. 12-13). He's been to the Alabama River, which will host the second stop Sept. 17-18, on a couple of occasions.

"I have a general idea of how everything lays out at the River, but I've never fished it at that time of year," he said. "At least I'll know my way around."

"Lake Jordan isn't very big (6,800 surface acres) and 3 days of practice there should be sufficient. I'll go there with no preconceived notions, and a lot of times that's a good thing. You can go into it with an open mind and basically let your instincts take over."

He's made his bones catching largemouths, but he's looking forward to another encounter with the Alabama spotted bass, which are renowned for their tenacity.

"When I fished the Alabama River before it seemed like both times the spots played a bigger role (than the largemouths). If they're not pulling water, then the largemouth could be more of a key. We'll probably have to fish for both and pay attention to the power generation schedules and take all that into account.

"I definitely do not feel any pressure this time and (the title) there for me to have. I'm going to put forth every effort to have two good tournaments and I'll let the cards fall where they may."

> Faircloth will be one of the favorites at this week's Rayburn Bassmaster Central Open, which will take place on his home lake. He'll depart for Alabama upon its conclusion.

> He placed 16th at the Alabama River Elite 50 in 2004 and 40th at a Bassmaster Tour event there the previous year. 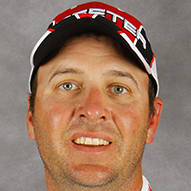