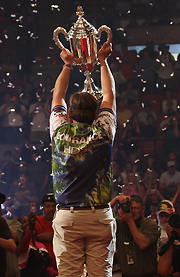 After the crowds filtered out of Mellon Arena, Greg Hackney packed his tackle into his truck, changed his clothes at the hotel, then went to dinner with his mother, father and nephew.

Greg Hackney hasn't had much time to think. He won the Forrest Wood Cup on Sunday in Pittsburgh, spent Monday there, then returned home on Tuesday to see his wife Julie and kids for the first time as Cup champion.

It's been pretty much a whirlwind, he said.

In the Q&A that follows, he talks about what happened after the crowd filtered out, what this week's been like, and what he thinks about next week's Oneida Bassmaster Elite Series.

BassFan: It got pretty crazy there after the Cup with fans and media and sponsors, but after everyone filtered out, and you sort of had your first moment to yourself, what did you do?

Hackney: That night, I really didn't do much. When I finally got through at the weigh-in, I went out and loaded the tackle back in my truck, went to the hotel, changed my clothes and went out to dinner. Honestly, I have yet to really have any period of time to sit around and soak it up.

I got up the next morning and it was wide-open with radio all day long and everything, and it's been like that since.

Who did you go out to dinner with?

My mom and dad and my nephew – he's an aspiring young angler named Ralson Lusby. He's the Arkansas state youth champion on the BASS side, and he's going to the Junior World Championship in Florida this fall.

Who picked up the tab?

Your wife and kids weren't at the weigh-in. What was the homecoming like?

It was good. I was really glad to be home. Julie was very proud of the whole deal. She already made a lot of plans (for the money). And the kids were pumped. They were all watching it on the Internet. That's the next best thing to being there.

And actually, coming in after I checked in – it was a mile boat ride back to the launch – I was like, 'Dang, it's so hard to get in position to even win one of these things.' I wasn't disappointed in the way I fished. I was disappointed because I thought I wasn't going to win. It came as a huge shock to me.

Now that you've had several more days to reflect, what do you think the win means to you?

It's the type of event that I put the most pressure on myself to win. I think in the past, one problem I had was I wanted to win a championship so bad I wouldn't fish naturally or normally. I'd go out and take unnecessary risks to win.

To win one – personally I think it solidifies my career. As far as things I've won – I've won Angler of the Year (AOY) in everything but the Elites, and now I've won everything there is to win except the (Bassmaster) Classic. 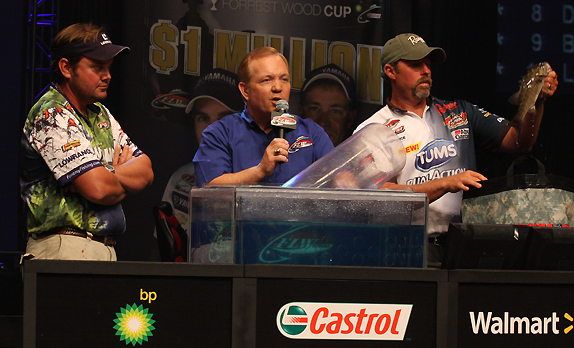 
Hackney said he never told his wife to hop a plane for Pittsburgh because he 'honestly didn't have a clue' he was going to win.

When I go back and look at my career, I've been down on myself the last couple of years. I haven't fished like I did the 2 years previous. But now when I look back, I've had a very blessed career, and I've accomplished a lot in a short period of time.

It's one of those deals. I'm disappointed when I don't fish up to par, but when I look back, it's been a pretty good career so far.

No rest for the weary as they say. You're at 26th in the BASS points – about 10 spots ahead of the Classic cutoff. You're probably a little closer to that mark than you'd like to be, so you need to have a pretty good finish next week at Oneida to make the Classic.

I was in really good shape points-wise a little while back. At one time I think I was in 7th. I had a very mediocre finish at Kentucky Lake (78th), and some things happened at the Mississippi I didn't have any control over.

My first objective (at Oneida) is to qualify for the Classic. If I can catch enough fish to accomplish that, then I'll think more along the lines of a Top 12. I think I'll go fish for what I get on and take no unnecessary risks – just fish my practice. And you know, sometimes your practice is good enough to do even better than you think.

In essence, that's the way you fished Pittsburgh.

You have to feel a little momentum, though, going into Oneida – some good feelings and confidence about your decision-making.

Yeah. I'm ready to go. I actually have several events remaining this year. I'll fish an Open at Champlain right after Oneida, then the last PAA qualifier and hopefully qualify for the PAA championship. So I'm glad I'm not finished, in a way. These last 2 months have been hard for me with sitting around. I went to ICAST and did some other things, but being off 2 months – I didn't know what to do.

The whole middle of the summer is not the time to be down. And I think that may have hurt me a little on the first day of the (Cup). Even though we practiced for 4 days, you don't practice the same way you fish. You're fishing totally differently and just trying to locate fish.

I was a little disappointed after the first day – I didn't feel I fished as well as I could have because I didn't fish much. But I got better every day. 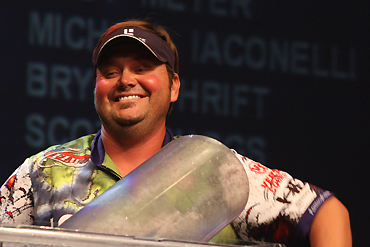 
Hackney said he plans to fish the FLW Tour next year if possible – even though he can only fish five of the six events.

Has FLW Outdoors made any overtures to lure you back to the FLW Tour?

They haven't yet. I'd certainly consider it.

Some pros are talking about fishing five of the FLW Tour events next year, then just eating the entry fee for the cross-scheduled event. Have you thought about that?

I actually have thought about that. The only problem is, you're going to have to have two boats and do some airplane time just to fish five. There's two different times you'll have to fly from event to event and have a boat and truck both places.

I plan to fish everything I possibly can – the Series, Tour, Elites, maybe even some Strens. Eight Elite events (next year) is not a lot, and we're through in June. To be honest, I like to fish through the month of October, then take my time off in November and start back over in February. 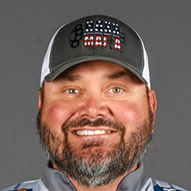