Meyer, Salewske Have 2010 Tour On Their Minds 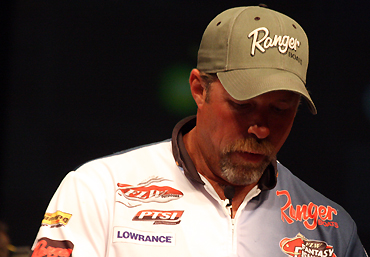 Rusty Salewske had 3 great days at the Forrest Wood Cup, but day 4 didn't go as well as he would've liked.

Buoyed by their strong performances at last week's Forrest Wood Cup, Californians Cody Meyer and Rusty Salewske have already begun to think about the 2010 FLW Tour. Both went into the final day at the Three Rivers with a more-than-realistic shot at winning $1 million, and that experience has them itching to take another crack at that lofty purse.

They also have renewed confidence that they can go toe-to-toe with the best in the league.

Salewske, who led the Cup after day 3 and ended up 5th, fished the Tour for 2 seasons earlier this decade with moderate success. He's co-owner of a contracting business and has one daughter in college and another in high school, and he'll do some hard thinking over the next couple of months about whether a return to the national circuit makes sense under the current and projected economic conditions.

The 26-year-old Meyer, meanwhile, definitely plans to be in Louisiana next February when the Tour campaign kicks off at the Red River. He's torn up the two top western circuits this year and proved in Pittsburgh that he has the skill set to be competitive in other regions of the country. Also, the $75,000 he pocketed for his 3rd-place Cup finish will cover the majority of the venture's price tag.

Although his performance at the Three Rivers got Salewske's competitive juices flowing at a higher level than they'd reached in awhile, he couldn't help but leave Pittsburgh with a few misgivings. After all, he needed only 3 1/4 pounds on the final day to claim the Cup – and the seven-figure check.

Instead, he weighed just one fish that day and dropped four places in the standings.

"I still feel really good about it," he said. "I never expected to do as well as I did, but I obviously have some regrets about the last day. If I'd had another 4 hours I think I could have caught them, but that's the way it goes."

He got a piece of advice from eventual winner Greg Hackney at the end of day 2 that he wishes he'd paid more heed to. It involved transferring gear from his own boat to the FLW-supplied sponsor boat that he used over the final 2 days.

Conditions in his upper Allegheny pool changed radically on the final day (lower water level, more current, tons of debris) and he would've liked to have had a few more bait options.

"(Hackney) told me to take everything because you never know what you're going to need. I grabbed a handful of spinnerbaits I'd been throwing, but I wish I would've taken some buzzbaits and a noisier topwater.

"They might not have eaten that stuff either, but I'll never know."

Focus on the Future

Salewske's previous stint on the FLW Tour (2004-05) produced five Top-50 finishes and placements of 90th and 143rd on the final points lists. If he goes back, he's confident that he can improve on those numbers.

"I enjoyed it before and I might be ready to do a little better this time," he said. "I'd really like to get back and I am considering it, but it's too early to make that decision."

He's concerned about the future of the Western FLW Series, which was his qualifying route to the Cup. Only 85 pros competed at Washington's Columbia River in June, and he thinks the turnout might be better if a couple of the events were held in Texas or Oklahoma.

"I like tough fisheries like the Columbia and Lake Mead, but it's not about what I like. Most of us want the same 150 guys to fish against at every tournament, and a lot of us have talked about it behind the scenes.

"There's a ton of fishermen in Texas, and if they had two events down there, then they might be willing to come out to California two times."

His family will be the No. 1 consideration in whether he fishes the Tour next year, but his 20 employees will also be taken into account.

"I'd hate to see them suffer so I can live my own dream. It's almost like having 20 kids – I love them to death and they work their tails off for me.

"When there was more work in '04 and '05 and it was more profitable, it didn't feel like that big of a loss when I was gone. Now it takes more effort to keep the doors open, but I'll start thinking next month about how I can pull it off." 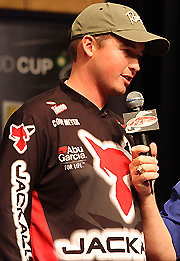 
Cody Meyer's performance at the Cup clinched his decision to fish the FLW Tour next year.

Meyer: Nothing to Lament

Meyer, who made the Cup through the Western Strens, left Pittsburgh with no lingering thoughts about what he could've done to finish higher.

"I couldn't have asked for more," he said. "I didn't lose any fish, and with that in mind, I really didn't have a chance to win. I did the best I could and took advantage of all the bites I got. I don't know what I could've done to catch two more keepers on that last day.

"I guess it just wasn't my time yet."

Nonetheless, he found productive new locales each day and figured out how to continually generate bites (even on day 4 he boated about four limits' worth, but only the trio he weighed met the minimum-length requirement). When his dropshot pattern petered out on day 3, he just switched to a grub and didn't miss a beat.

"I used the grub for the smallmouths in the Columbia River (en route to an 8th in that Western Series event). Some of the current stuff (at the Three Rivers) was similar, so I thought they'd eat it pretty good.

"I had both baits tied on going into the (Cup), so I just swapped over."

Meyer won the Western Stren points title this year and is leading the Western Series Angler of the Year (AOY) race with two of the four events in the books. In seven FLW Outdoors tournaments this year (including the Cup), he's posted three 3rds and two 8ths.

Prior to the Cup, he was still undecided about fishing the Tour next year. Now he's all but committed to it, and he said he'll be able to keep his job as an auto wholesaler since it's primarily phone work that he can do from anywhere. His wife recently graduated from college and they have no children yet.

"It's going to be cool. It's exciting, and it's a big step. I've fished against guys like (Brent) Ehrler out here, but to go back and do well against some of those (Eastern) guys was a big confidence booster."

He still has several events left this year, however. In addition to the two remaining Western Series tournaments, he'll compete in the Stren Championship at Alabama's Pickwick Lake in early November.

He fervently hopes to get another chance to win the Cup a year from now at Lake Lanier in Georgia.

"This pumped me up big-time and I can't wait to go back."

> Salewske locked more often than any other Cup competitor and had high praise for the lockmasters. "One guy worked all night for day 3 of the tournament – he had a logjam in there and he knew I wouldn't be able to get up there unless he got it out. And there he was the next morning, cheering me on."