How The Red River Lays Out 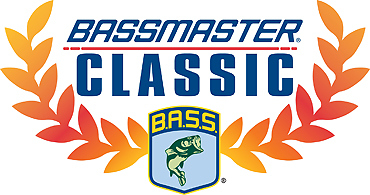 Confused about the what and where of the Red River Bassmaster Classic waters? You're not alone. Any river system is tough to get your hands around, especially if you've never been within 500 miles of Louisiana.

Help is on the way. Here's how it all lays out.

The Red River, which is regulated by the Army Corps of Engineers, flows south into the Mississippi River, but the Classic will only be held on Pools 3, 4 and 5 of the Red.

Classic competitors will launch into the bottom stretch of Pool 5, which is just south of Shreveport–Bossier City.

The distance from Shreveport to the end of Pool 3 near Colfax is about 120 miles as the crow flies.

Notable about the Red too is its wealth of oxbows and backwaters.

That's the broad look at the fishery. For a more in-depth look at each pool, BassFan enlisted the help of Shreveport resident and fishing enthusiast Clayton Frye. BassFans may recognize the name – he penned a recent BassFan Opinion and helped organize the recent Classic Showdown tournament on the Red. 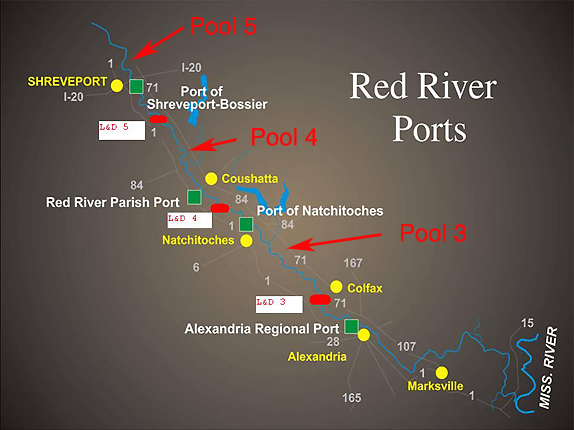 The field launches about 12 miles upriver of Lock and Dam 5 at Red River South Marina.

Pool 5 is the last pool on the Red, so anglers can fish as far up as they care to navigate. According to Frye, though, the navigation gets treacherous, and unless the water's quite high, the upper reaches of Pool 5 will be inaccessible.

"With the current water level, they might even have trouble getting north of Shreveport," Frye noted. "And I don't know if you can even get a bass boat north of Cash Point Landing – there's sand bars and everything and you really have to know what you're doing. The BFL last year was won up there, but the water was at 21 or 22. Right now it's at 14 1/2."

Frye added that of the three pools, Pool 5 is the least affected by an influx of water. "As a rule, if the river comes up 2 feet, Pool 5 will fluctuate maybe 3 or 4 inches. It's so vast that the water just backs up there, and the Corps can really control it. However, you'll get a little rise in the water in the heart of Shreveport."

Pros who want to fish Pool 4 will have to lock through. Estimated lock time is about a half-hour.

The pool ends at Lock and Dam 4, which lies between Natchitoches (pronounced nak-atish) and Coushatta (pronounced kuh-shatta).

According to Frye, Pool 4 fishes "more like a river" than Pool 5, but "not as much like a river" as Pool 3. Most of Pool 4's oxbows are river-exposed and hence more susceptible to changing conditions.

Generally, Pool 4 is thought to fish better than 5 or 3 under higher water levels.

One interesting note is whether continuous locking by the Classic field might affect flow or water levels in Pool 4.

It would be a gamble for anyone to run down to Pool 3. The four locks (down and back) would add 2 hours to the travel time and the run itself would take 2-plus hours. That would leave, at the most, about 3 hours of total fishing time.

Then again, a pro might only need an hour or less to do damage. Still, if anyone wants to fish Pool 3, he or she will pretty much have to commit to it.

Overall, according to Frye, Pool 3 fishes like a true river – a main channel with lots of current, only a few oxbows, and everything changes quickly if any water's added to the system.

> Savvy BassFans might remember that the Red has several confusing areas in terms of off-limits. Dean Rojas was DQd there back in fall 2001 for casting into an off-limits area. He fished Port Lake, but made casts into Cooley's – a private lake that sits behind Port Lake.

> Here's the current boundaries of the tournament waters as defined by BASS: "Pools 5, 4, and 3 on the Red River and all rivers, creeks, and canals connecting to pools 5, 4, and 3 on the Red River. Per Louisiana law and BASS rules, any waters closed to public fishing will be closed to 2009 Classic contestants. As of July 15, 2008, Cooley Lake, Stevens Lake and barge turnaround (across river from Red River South Marina oxbow entrance) are off-limits."

> The "Schoolbus Hole" near Coushatta is another area that BASS may specify as off-limits.