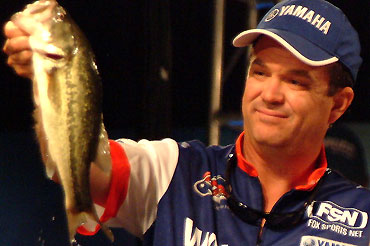 Jay Yelas has won just about everything at the tour level, except an FLW Tour event.

After day 3 of the Wal-Mart Open (Beaver FLW Tour) in Rogers, Ark., the end-game finally took shape. Here's how things shook out.

Jay Yelas started on the "deadly dock" once again – straight across from Andy Montgomery – and caught a limit. He later culled up to 11-13, and he leads Andy Morgan by 2-07.

For the second straight day, the fish were to Yelas' side of the dock (Montgomery's side yielded only 4-13).

Morgan, on the other hand, reversed course today and decided to camp. He caught a solid Beaver limit (9-06), but jumped off a few key fish that would have put him around 13 pounds.

So Morgan starts tomorrow with a 2-07 deficit, which is significant at Beaver, but not huge, especially since the deadly dock is such a crap-shoot. Yelas could easily strike out there tomorrow (as he did on day 1), which would leave the door open for Morgan (if he can keep his fish buttoned up).

Another possibility would be that the deadly dock has already been raked, although it appears plenty of quality fish are left.

Then there's Chad Morgenthaler, who was a big surprise today. He slipped into the last cut spot yesterday when he edged Matt Herren by an ounce. Morgenthaler weighed his lightest bag of the 3 days so far (a 7-03 limit), which put him 4-10 behind Yelas.

Again, if the deadly dock dies, and Morgan stumbles, there could be an open door for Morgenthaler to slip through, but both of those permutations would have to occur.

And for Jacob Powroznik, he'd need a career day, and Yelas, Morgan, and Morgenthaler would all have to stumble, in order to make up his 5-13 deficit.

Here's a look at how the Top 10 sit with 1 day left to fish. Today's weight is followed by distance from leader in red.

Yelas said the odds are "good" the fish will bite on his side tomorrow, because he took the time to learn more about the area. The good news, for him, is his side of the dock appears to be better, because it has an underwater point and transition area, whereas Montgomery's side only has a bluff.

Yelas and his partner pulled about 23 pounds out of there today. After the bite died, he went and threw a swimbait in shoreline bushes and caught three more keepers.

"The first day, the shad were all over that bluff," he noted. "That's why they were on his side. Yesterday and today, the shad were on top of the point. My partner caught 11 pounds just throwing out in the middle. But still, a lot of it depends on where those shad happen to be when we wake up."

Notable for Yelas is this is his third Tour Top 10 in a row, and he finished 2nd in the last event at Norman. In addition, he'll be the new Angler of the Year leader after the event concludes.

About his desire to win, he said: "I definitely would love to win one of these. Every angler loves to win – that's why we're in this thing as competitors. But we all know God's perfect timing. He's got another tournament for me to win. 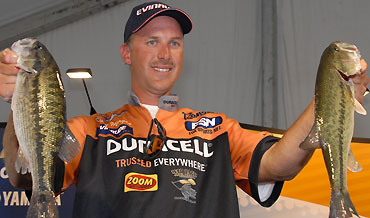 
Andy Morgan's morning bite was a no-show, and that hurt him, he said.

"I've been in it for 20 years now, with highs and lows. The tide's really come in for me the last 2 months, and I'm on a little hot streak, with a wave of momentum, and it stands to reason that'll follow through tomorrow.

"I give God all the glory, win or lose – He's ultimately responsible for blessing me with the opportunity to do this as a living."

"It's going to be a tight one," Morgan said. "I camped today. I've got a pretty good area, and it takes a lot (of time) to fish through it. I lost a couple of good ones. If I didn't, I'd be leading.

"It was just one of those days," he added. "I fished bad today. I really didn't do much of anything right except make good decisions on where to stop."

He has yet to win a tour-level event, despite a decade of trying. Onstage, he said he feels like Phil Mickelson must have felt before he won the Masters. Later, he said: "It sure would get the monkey off my back."

He plans to stay in the same area tomorrow, and throw pretty much the same thing. He noted it's "too risky" to start running around, because "so many places don't have fish on them right now."

One problem today was clear skies. While Yelas had fog over his water, Morgan had bright skies, and that all but killed his morning topwater bite, which had been key on days 1 and 2.

On whether he thinks he can win, he said: "I've got a good shot at it. I wouldn't bet against me at this point." 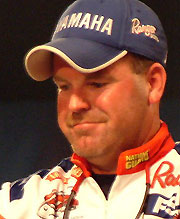 
Chad Morgenthaler's fishing a little deeper, and he thinks that's been key.

3rd: Morgenthaler Will Stick With it

Morgenthaler knows the mountain he faces tomorrow. But he also knows this is Beaver – a lake where "anything can happen. That's the good part about the position I'm in.

"There are some big sacks trolling around out there, but obviously a few things have to happen – some guys have to not be able to catch them. I'm one of the few guys I feel does have a chance to win it though.

"I'm just going to keep doing what I've been doing," he added. "If my smallmouths and largemouths bite, and I don't booger up my largemouths like I did today, I'm going to be able to make a run at it – I promise you that."

He said he's working typical post-spawn stuff, which isn't a surprise. But he feels he's fishing a little deeper than most, and he's rotating through a ton of areas – hitting them multiple times throughout the day – because it's "all a timing deal."

On what a win would mean for him, he said: "Oh man, I couldn't even describe it. This is my first Top 10 on the Tour. I'm 16th in the (FLW Tour) points, and this should move me up even further (for a Forrest Wood Cup berth)."

About his chances to win, Powroznik said the same thing as Morgenthaler: "Anything can happen on Beaver Lake."

He added: "The weights have been going up and down. Jay and Andy (Morgan) have been pretty consistent all week, but I'm going to catch me five, then go try to catch a big one. I don't know how – maybe a big swimbait." 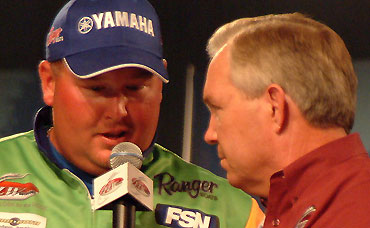 He has the schooling bites going in the morning, which has generally been good for a limit, but he thinks he needs twin 4-pound bites, or a 6-pounder, to have a shot.

About making the Top 10, he said: "It's a blessing just to be able to fish in something like this – the Wal-Mart Open here on Beaver Lake. The crowd's unbelievable. It's just a blessing come true."

Alfred Williams caught 13 1/2 pounds yesterday, which moved him up from 116th to make the cut in 9th. It was a different story today, though. He bageled.

He noted he targeted big bites, but they didn't go.

"That's what got me here. I thought they'd bite again today and I could really do some damage. Obviously, hindsight's 20/20.

"I had a schooling-fish bite. I went in there and one got off. Then my co-angler caught a fish. After that, I caught one striper, and that was it."

After that he went to his big fish. "I started working it and stayed there forever. "My co-angler beat out a little old limit from the back of the boat, but everything I caught was short.

"I'm not disappointed," he added. "Once you make the Top 10, you've accomplished so much. We still have 1 day to go, and I feel that I'm going to catch a big bag tomorrow."

> This weekend is Morgenthaler's 18th wedding anniversary. His wife is in attendance.

> Ray Scheide, in 8th, noted: "It was a tough day – a weird bite. Tomorrow we'll have to go get some dynamite."

> Dwayne Horton on his 4-05: "I'd been catching a lot of fish around docks and stuff, but I believe they got beat up so bad that I was using a little too bit heavy line. Tomorrow I'll go to 3-pound Berkley FireLine Crystal and see what happens."

Here's the forecast for the remaining tournament days. For more weather news, including radar and satellite imagery, visit OutdoorsFanWeather.com.