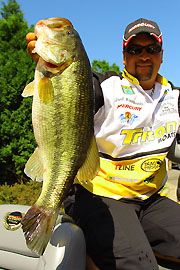 Only one other angler caught a bag that was heavier than the 6-03 brute that Fred Roumbanis pulled from Lake Townsend.

Not many anglers can say they caught the three biggest bass weighed in on a single day at a tour-level event. After today, Fred Roumbanis can.

The 28-year-old California native, who recently relocated to Oklahoma, boated only a trio of largemouths from Lake Townsend on day 3 of the Bassmaster American Major. But none was under 3 3/4 pounds, and each was considerably larger than the entire bags brought in by more than half of the Top 12 field.

With 14-09, he has a lead of more than 5 1/2 pounds with 1 day to go. His first child is due within a matter of days, and he now stands an excellent chance of becoming a tour winner before he becomes a father.

As expected, Townsend was a far cry from High Rock, where the field spent the first 2 days of the tournament. Just a single limit was caught from the 1,500-acre municipal impoundment on the north side of Greensboro, N.C., and

eight anglers (3/4 of the field) caught two keepers or fewer.

Missouri's Brian Snowden, the lone limit-catcher, is 2nd with 9-00. Then there's another big drop down to 3rd, where Arkansas' Mike McClelland sits with 5-14 (he caught four fish).

Missouri's Mark Tucker was 4th with three fish for 5-09. California's Ish Monroe and Arizona's John Murray advanced despite weighing just two fish each – Monroe's duo combined for 4-15 and Murray's checked in at a paltry 2-13.

Here are the anglers who'll fish tomorrow, with their deficit margin from the leader in red:

Day-1 leader Edwin Evers of Oklahoma and Lee Bailey of Alabama both missed the cut by an ounce with two-fish, 2-12 stringers. South Carolina's Ray Sedgwick caught two for 2-04 and Alabamians Gerald Swindle (2-01) and Russ Lane (1-03) were limited to one keeper apiece.

The field rotated through a six-hole course, and hole No. 1 was far and away the most productive. It encompasses the marina and it's where the fish caught in the weekly local tournaments are released.

It was Roumbanis' second stop, and it gave up all three of his hawgs. McClelland caught three of his four there, and it kicked out one keeper for at least two others.

The leader will have to wait a bit before fishing it again tomorrow. Hole selection is based on placement in the Elite Series Angler of the Year (AOY) race, and Monroe is 4th on that list (three spots ahead of Roumbanis). He opted for No. 1, so Roumbanis will start in 6.

The water in Townsend is about 5 degrees cooler than High Rock, and there are a substantial number of fish on the beds. One that Roumbanis caught today was a spawner, and Monroe has two pinned down in No. 2.

Monroe said that's why he chose to start in hole 1 – he needs some sun to see hole-2 bedders, and the light level in the first rotation won't be sufficient.

Others reported seeing extremely large fish (up to 7 pounds) cruising the banks, and hope to catch some of them tomorrow based on the knowledge they gained today. More than one angler said a 20-pound bag is a possibility.

"I thought I'd probably be able to fish tomorrow," he said. "But I thought there'd be other guys who had limits.

"This place obviously isn't at it's best, or it's just not a great lake. If I can get one or two good fish tomorrow, I think I'll have a shot (to win). I hope I catch them early." 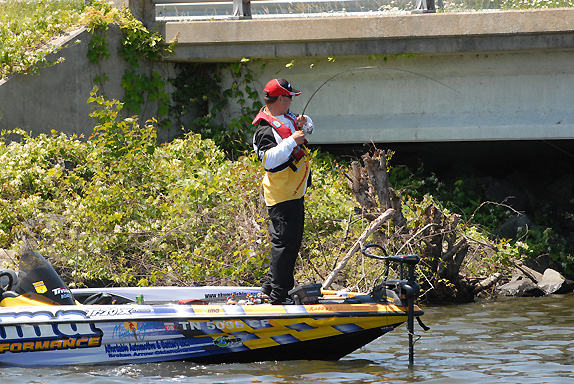 
Roumbanis caught all three of his fish from hole 1. He'll be the second angler to rotate through there tomorrow.

His biggest fish weighed 6-03. Another was over 4, and the third threatened that mark. One came off a bed and he caught the other two blind."

"I do feel that I've got something to go to tomorrow. I'll have a lot of rods on the deck because every hole is completely different. Some have deeper banks, and others have offshore structure.

"My first thought was that whoever could junk-fish the best would win this thing, and that might be what ends up happening."

He doesn't feel that his advantage is secure, though.

"When the fish are big but there aren't that many of them, (a deficit) can be made up in a hurry."

Snowden stubbornly tried to maintain the shallow flipping pattern he'd used to lead the cut at High Rock, but eventually had to abandon it.

"I wasted about 3 hours flipping everything I could see in shallow water," he said. "There are some fish spawning up shallow, but the laydowns didn't have enough water on them, and it was too clear.

"I learned a little bit this afternoon, so I'll try to take that and apply it tomorrow."

He ended up catching eight fish, including three shorts (the minimum length on Townsend is 12 inches). His biggest was a 3-pounder.

"It was cool having the lake all to ourselves (the City of Greensboro closed it to recreational traffic for the weekend), but it was kind of hard to stay awake with the lack of bites. There's some quality fish in there, but they're just hard to catch."

He guides back home on Table Rock, but would hate to try to make a living in that role on Townsend.

McClelland said he'd be in 2nd place if he'd caught everything that bit.

"I'm honestly encouraged by what I figured out and learned today," he said. "Two fish got off that would've made a huge difference – I could've had 9 1/2 or 10 pounds.

"I really think I learned enough to go out and fish effectively tomorrow."

He caught three of his fish off a shallow rockpile in hole 1, which he thinks might be productive again tomorrow. He also spotted some large cruisers.

"I feel like I can get six or seven keeper bites. I definitely have the opportunity to catch a better bag tomorrow if I execute a little better. 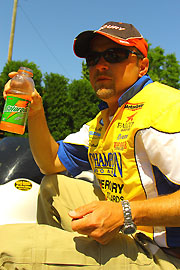 
Mike McClelland thinks he'll have a chance to win tomorrow if he can catch 12 pounds.

"I think I'll need a minimum of 12 pounds to give myself an opportunity to win. Not taking anything away from Fred, but depending on the weather or this, that and the other, he could end up with 2 or 3 pounds tomorrow."

At least he won't have to burn as much time exploring each hole as he did today.

"I've got some brushpiles marked, so I can just go straight to them and see if I can figure out what I need to do."

"Tomorrow I'll have to change up a little bit, but I don't know exactly what I'm going to do," he said. "I saw some big ones guarding fry, so I know where they're at. Tomorrow I'll stay back a ways and throw to them."

He said the cruising fish are difficult to see because of overhanging limbs and other vegetation. He just happened to spot a 5-pounder in one locale, so he started looking harder the rest of the day and spied a 7 and a 4.

"I think a guy might be able to catch a couple of those early in the morning. A 20-pound bag could be caught if things go right because this place has some giants.

"The problem with these little community lakes is the fish are very smart because they get so much pressure."

Monroe fished hole 2 on the second-to-last rotation and found two 3-pounders on beds. He'll try to catch them tomorrow, and hopes to find some other spawners.

"I hooked one and lost it, but it came back (to the bed) later," he said. "The other one had just started to lock on when I ran out of time."

He started in hole 4 and caught one fish, but didn't boat the other until the final period. He hopes to get off to a quicker start tomrrow.

"Hopefully I can catch one or two in hole 1, and then catch those two (spawners). That would give me the rest of the day to look.

"Anything's possible after you've seen the size of the fish in there. The opportunity to catch a 20-pound bag is there, and it's not over."

Murray had no inkling prior to the weigh-in that his two fish – one a 12-incher – would pull him through to the final day.

"I was just happy to have a couple to weigh in," he said. "I was pleasantly surprised." 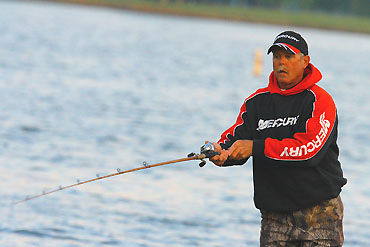 Like Monroe, he plans to spend most of day 4 sight-fishing. He caught both of his fish that way today.

"I worked on a 4- to 5-pounder for about an hour, and if I'd caught it I'd have been a lot farther up there. I didn't have the right tackle with me, but I will tomorrow.

"There really are some big fish in this lake, and hopefully I can catch a few of them."

Rojas caught two bass, but both measured 11 3/4 inches and had to be thrown back. He also caught a catfish on a crankbait, and had a bluegill blow up on a frog.

"Kermit has no friends – everybody wants to take a shot at him," he said. "You know you're in trouble when you start catching different species. All of them were under 12 inches too."

It was a rough day, but he was okay with his 12th-place finish.

"It was a great week, and I'm just really happy to have made the cut and had the opportunity to fish today. I feel really good about going to (the upcoming Elite Series event) at Smith Lake."

Here's the forecast for the final tournament day. For more weather news, including radar and satellite imagery, visit OutdoorsFanWeather.com.

> Tucker said he might try a Mojo rig tomorrow. "I saw a lot of stumps offshore, and some of those fish that are done spawning might be sitting out there on those points."

> Rojas said he never got overanxious during his keeperless day. "It was kind of weird, coming off such a high yesterday. I just fished along and fished along and never got too uptight. The fishing was so poor that I don't think I could take another 8 hours out there. I'll just take my money and run."