BACK
Yelas Surges To 2nd

Nixon Slams The Door With 14-07 Stringer 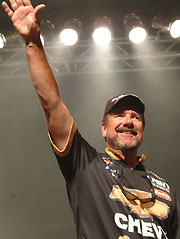 Larry Nixon figured he'd win the Norman FLW Tour if he caught 12 pounds today, and he was right. But he threw in an extra 2 1/2 pounds just to make sure.

The 31-year veteran from Arkansas closed out his 17th tour-level victory with a 14-06 bag that gave him a 27-00 total for the final 2 days. The triumph snapped a winless drought that dated back to February 2002.

He won by 3-09 over another of the sport's luminaries. Texas' Jay Yelas caught a tournament-best 16-06 today for a 23-07 total and a runner-up finish.

Here's a look at the bottom half of the Top 10:

Athletes attain legendary status by coming through when it counts most, and Nixon certainly did that today. Today's weather conditions in the Charlotte, N.C. area (sunny with moderate wind) were ideally suited to what he was doing, and he took full advantage.

He had the savvy to stay off his best stuff until the time was right. And when that time came, he moved in and took prisoners (they were later released, of course).

Yelas, who failed to catch a limit yesterday, also turned in a final-day performance befitting of an all-time great. His finish was his best at the tour level since he won the 2002 Bassmaster Classic.

Nixon said winning a tournament brings on a feeling that never gets old.

"I'm so excited," he said. "Every time you win one, you tend to rank it ahead of all the rest. But this one has to be in my Top 5 ever just because it's been 5 years since the last one.

"A lot of things happen over the course of your career that knock you out of contention every now and then. But when you win one, it kind of rejuvenates you."

He focused on stumps in 3 to 4 feet of water over the first 3 days, but those were unproductive today. So he threw his Berkley PowerBait Wacky Crawler at other stuff instead.

"I didn't get the bites on the stumps, so I fished little pieces of brush or logs. I fished a lot of banks that really didn't look worth a hoot, and I guess that's why I had them to myself." 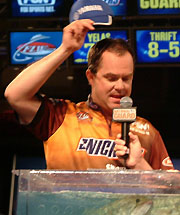 Yelas was pleased that he was able to climb seven spots in a 10-angler field.

"It was a lot of fun, and I'm tickled to death to finish 2nd," he said. "When you start the day in 9th, that's a pretty good move. You're protected on the downside, so you can just swing for the fences, and all it can cost you is about a grand.

"I just have to tip my hat to Larry – he was steady all week and he deserved to win."

He fished a swimbait all day and caught only five keepers, but they were all quality bites. One was a 5 1/2-pounder.

"After they wouldn't bite the swimbait yesterday, I changed my rotation on my spots, and it paid off. I started in the area I'd been going to at about 10:00, and I caught three big ones.

"Then I went to my starting spot and caught the 5 1/2. All I'd been catching there was 2-pounders."

Vatalaro, who fished some of the same water as Nixon, had mixed feelings about his 3rd-place finish.

"It feels pretty good, but it's still disappointing not to win it. It wasn't for a lack of trying, I promise you that. It was a lot of work.

"It was fun and it was a great learning experience. I got to wear that hat camera and I made my first (FLW Tour) Top 10. Now that I've cleared that hurdle, I think it'll take some of the edge off."

He had a limit by 9:20 and culled a couple of times over the next hour and a half. Then he ran upriver to an area where he'd been catching some of his best fish on a jig, but never got a bite. 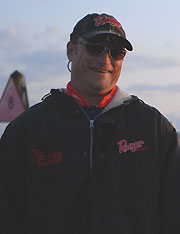 
Local rookie Hank Cherry made a strong comeback from a rough day 3.

Cherry, who lives in nearby Maiden, got his first Tour Top 10 out of the way in just his third outing.

"I definitely enjoyed it," he said. "It feels wonderful. It's something I've dreamed about for a long time."

He fished about the same way he did on day 3, when he came in with four fish for 6-12. His quarry cooperated better today.

"They just held onto the bait (a jig), whereas yesterday they were coming up and slapping it. I caught most of them in the head yesterday, and one was in the tail.

"Today I had to dig it out of their throats."

"I can't really explain what happened. It was one of those things where you see the fish real quickly, and then it comes off."

Suggs started the day in 2nd place, just 1-05 out of the lead, but lost his first seven bites.

"Anytime you make a Top 10 it's good, especially when you make the Top 5," he said. "But at the same time, this was disappointing.

"In all the tournaments I've been in, in BASS and FLW, I feel this was the best opportunity I've had at winning. To fall short hurts a little bit." 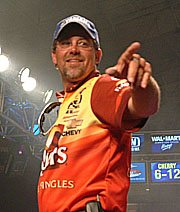 
Scott Suggs would have finished higher than 5th had he not lost his first seven bites.

He broke off two fish early and simply missed five others. That forced him to sit down for about 10 minutes and regroup as he re-rigged his rods.

"Because the wind shifted (to the north), I did everything backwards of what I'd been doing, and I think I got in too big of a hurry. And the bite got finicky for me – the hook fell out of two of them (that he caught later) when I flopped them in the boat."

> North Carolina rookie Bryan Thrift (10th), who's made two Top 10s in three tournaments, weighed just one fish for 1-03 today. "I'm happy with the finish, but one fish on your home lake is kind of embarrassing," he said. "I panicked and ran around too much when I should have just gone to one area and picked it apart."

> Yelas said he went through 25 swimbaits today to catch five fish. "Every cast you're banging it off a dock, so they get beaten up. I probably burned through $300 worth in the tournament, but it was worth it."