BACK
Crank Came Through 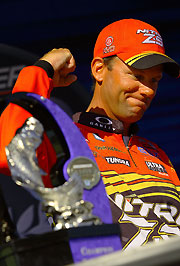 When Kevin VanDam gripped the trophy, he said: 'That's for Hackney right there.'

Last year at Sam Rayburn, Greg Hackney carried his winner's trophy through the parking lot, turned to Kevin VanDam and said, "Guess you want to get you one of these. You ain't got one of these."

VanDam may be the most dominant angler of the modern era, and the No. 1 ranked angler in the world, but until today, he'd never won a Bassmaster Elite Series event. And he's been thinking about Hackney's comment, he said, since the day it happened.

VanDam's redemption came in the form of the 25-pound hammer he dropped on the rest of the field at today's Guntersville Bassmaster Elite Series. With it, he moved up from 4th and smoked the field by a 7-02 margin.

As he hoisted the trophy, he said: "That's for Hackney right there."

Nine of the Top 12 caught 17 pounds or less today, and VanDam's bag was one of only two over 20 pounds.

What made the difference for VanDam was his afternoon. He had the same morning bite as everyone else, which largely fizzled today under bright sun and near-still conditions.

But when others went sight-fishing, he stuck with the green. He threw a crankbait to the grass edges, where the post-spawn females had pulled to.

That made the difference, and once again he proved he's the world's most dangerous angler.

VanDam: 'It's Something Special'

VanDam fished his first tournament at Guntersville in 1989, and despite 18 years of effort, had never won here until today.

As his boat pulled up to the weigh-in, he received a standing ovation from the sprawling Alabama crowd – seated in the Guntersville High School stands. He pulled his sack from one livewell, then pulled out his biggest fish by hand – a 7-05 – and the crowd went wild.

Butcher proved on day 1 that a 25-pound bag was possible, but few would have predicted VanDam could whack that on the final day, with sun, heat and a glass-like surface. 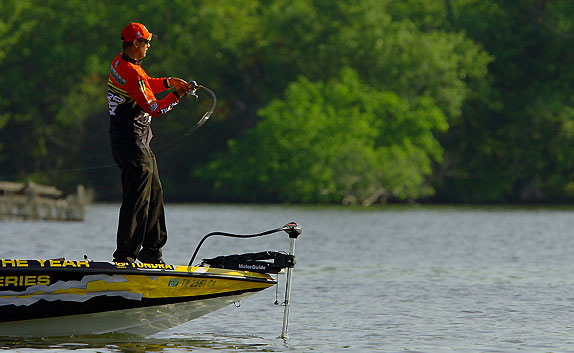 
VanDam's 25-pound limit is even more amazing because it came on the final day, under clear skies, and with little to no wind.

"I'm real excited about it," VanDam said shortly after his win. "Anytime you can win on this Series, with these guys, it's something special.

"I've waited a long time for this. Guntersville's always been one of my favorites. Man, this is awesome. (But) I can't wait to get home. The last time I drove home was after the (Bassmaster) Classic (in February)."

He added: "These guys out here, we spend so much time together – a lot of them are really good friends. I like to share in the joy when other people win. Hopefully, a few people will be glad I did well here this year."

About what this win means compared to others in his career, he noted: "These guys are definitely the best in the world. This is the toughest series out there – it has the best anglers. To be able to compete at this level – I don't take it for granted. It means a lot.

"Anytime you win, all you want to do is win again. I'll try to win the next one too."

He didn't do much at his first two stops today, and was "really kind of sweating it," but then he said he got into "a pretty good place and started catching fish. That gave me the comforts to do well.

"I had a great day and I'm really thankful for it."

He threw both a Strike King spinnerbait and crankbait. The details of his winning pattern, as well as pattern information for the rest of the Top 5, will be posted soon.

It would seem that Tucker couldn't have caught VanDam, but as he told it, he actually could have if he'd converted yesterday.

"I lost the tournament yesterday," he said. "I had three fish on yesterday between 4 and 5 pounds that would have gave me a good 23 or 24 pounds. The technique and the way I was fishing, you're going to lose some, but dad gum I hated losing those big ones." 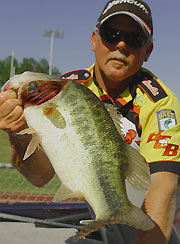 
Mark Tucker said yes, 1st place was within reach, but he lost the tournament yesterday.

About his 2nd-place finish, he said: "It was a big relief off my shoulders. I'm just trying to get things back in order – being on the bubble for the Majors, and struggling with a little bit of financial problems. This couldn't have come at a better time."

No rest for the weary Scroggins – he's driving to Santee Cooper tonight for this week's Bassmaster Southern Open.

About his finish here, he said: "I'm happy with it. When the tournament started, I'd have been tickled to death to be in the Top 5. I'm kind of disappointed I didn't win, but I don't feel like I was on enough fish to win.

"I was capable of catching 20 pounds a day. Today I didn't do that. My cranking fish didn't bite this afternoon. Even if I had 20, though, I wouldn't have won, so I'm happy with my it."

With his finish, he moved up a massive 25 spots in the Elite Series Angler of the Year race. About his fishing so far this season, he said: "I've had a couple of bad tournaments, but I've been fishing really well. 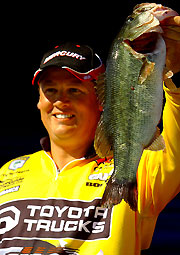 
Terry Scroggins moved up 25 spots in the Elite Series points with his 4th-place finish here.

"I won a tournament at Toho, and me and my teammates won the Toyota Texas Bass Classic at Lake Fork. I'm making some of the right moves."

Kelly Jordon won here previously, and he has a 3rd and a 14th on his G-Ville résumé too. He moved up huge yesterday to make the cut in 7th, and with 18-03 today, he improved one spot to finish 6th.

"I started on my spinnerbait area where I'd been catching them, and I caught that whole stringer in the early part of the morning," he said. "The spinnerbait died pretty quick, then I went hunting for a big one.

"In my places, (there was) a lot of baitfish today, actually too much," he added. "I really struggled. I was little by little catching (them), then finally got the big bite. It just came off. But I really enjoyed the 3 days."

Alton Jones, who finished 2nd here last year, made the cut in 12th. He moved up four spots today with a 13-10 limit, and noted that the high skies "had a lot of effect."

"I think the big fish were mostly post-spawn, and (they) pulled out. Reaction baits like a Booyah spinnerbait and Fat Free Shad (crankbait) were getting reaction bites, but with the slick water and bright sun, the fish don't react. You have to slow down, and I never got a quality bite."

He had his limit by 10:30 today, which he eventually filled with sight-fish. "That really settled me down," he noted. "I spent the rest of the day fishing deep structure.

"I caught a lot of my fish this week Carolina-rigging a Yum Nada worm," he added. "When the fishing gets tough, you need to use a smaller bait like the Nada worm to put fish in the livewell."

Not only was this the first Top 12 of the season for Kota Kiriyama, it was also his first check.

He made the cut in 9th, caught 11-02 today, and finished where he started the day.

About his pattern, he said: "(I) made a decision to throw big baits to catch big fish all week. I threw 3/4- and 1-ounce spinnerbaits(s) all week. But I only got five or six bites every day.

"I mainly had three different areas. The only problem I had was the time. They quit biting (at) about 8:30 or 9:00. You have to be very careful of which area you go (to) first in the morning."

> Butcher, who led days 2 and 3, got a surprise this morning when his family showed up at the dock. "They never told me they were coming," he said.

> Quinn noted: "I had a good tournament. I didn't lose any fish that cost me anything. The shad spawn was real critical. I could do it until about 10:00, then I went sight-fishing the rest of the day. I just never got any big bites today."

> Skeet Reese still leads the Elite Series AOY race, but VanDam has moved up to 2nd – 25 points behind Reese. To view the updated standings, click here.