BACK
Wind Keeps Weights Down 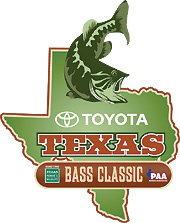 Alton Jones' team has proven over the first 2 days of the Toyota Texas Bass Classic that they can catch quality fish at Lake Fork when it's cloudy and windy. If they can do it for 1 more day under conditions that are expected to be sunny and breezy, they stand a good chance to win the first-of-its-kind, Professional Anglers Association-sanctioned event.

They caught 58-12 today for a 2-day total of 140-12, which gave them a 15-pound lead as the 40-team field was cut to the Top 5. Their haul today was more than 23 pounds lighter than on day 1, but it was still among the best that could be managed on a day that featured a constant 25-mph north wind that gusted to 35 at times.

Chad Morgenthaler's team completed an improbable charge into the Top 5 with 59-12 today and a 112-04 total. They had just 3-08 after the day-1 morning flight.

Here's how the rest of the Top 10 teams ended up (teams are listed by captain only):

A little more than 42 pounds separate the Top 5, but that's not insurmountable considering that teams can weigh 40 fish tomorrow. All anglers will fish both the morning and afternoon flights, and each can contribute five fish per session.

Flipping and offshore patterns were predominant for the second straight day, but sight-fishing could be a huge factor tomorrow if the forecast of sunny skies proves correct. Just about everybody thinks they'll have a better day – no matter what they're doing – if the wind lays down as expected.

The winning team will be determined tomorrow by highest cumulative weight.

"The only difference today was the wind made it much more difficult to fish," he said. "Hopefully it'll be easier tomorrow and we'll be able to spend more time in the places we really want to fish.

"We probably got as many bites as we did yesterday, but I lost a real key fish and we missed a couple of other bites. We were getting our opportunities, but the weather made the bite a little bit funny."

Collectively, they were five fish short of the maximum today.

"We're fishing for big bites and we're not stuck on that number. We're concentrating on one big bite at a time, and then we try to figure out how to get the next one."

Some sight-fishing will be on their agenda for tomorrow.

"I found a 6-pounder (on a bed) this afternoon, and there's more where she is."

2nd: Scroggins Back in School

Scroggins and Chris Daves struggled to get bites this morning from the big school of fish the captain found in practice, but James Niggemeyer and Frank Ippoliti put a thumping on them this afternoon.

The second-flight duo caught about 40 pounds after the early pairing had managed only about 17.

"The fish on that ledge didn't bite this morning," Scroggins said. "We had cloudy, low-light conditions and it was very windy. It was still cloudy this afternoon, but I think enough light finally started coming through to get them turned on."

Scroggins and Daves weighed only three fish today, but one was a 7-12 and another was about 6. Niggemeyer and Ippoliti bagged the maximum 10 and had a solid 4-pound average.

He thinks it'll be even more productive if it's calm and sunny tomorrow.

"Those fish are down about 12 to 20 feet, so high skies should make it a whole lot better. And there's still a lot of them there."

Chad Morgenthaler's team has been on fire since the start of the day-2 afternoon session. Their momentum carried through to this morning.

Morgenthaler and Mike Hawkes have fished the first flight both days, and David Dudley and Daryl Burkhardt have handled the second-flight duties.

"Mike and I whacked them right off this morning," he said. "We've got one place that's just phenomenal for the first hour, and we try to capitalize as quick as we can. Today we got two (5-pounders) and two 4s out of there."

Flipping is the team's primary pattern. He thinks it could get them 40 fish tomorrow if the weather cooperates.

"We get to fish the whole 8 hours, and anything's possible on that pond. If you get into the right school of fish and catch two or three giants, then it's on.

"I think we'll stroke them with the sun."

The Howell team's day was all about numbers as they weighed 19 fish – just one under the maximum – to compile 62 pounds and move up 18 spots.

"We got to a lot of the water we couldn't get to yesterday because of the wind," he said. "After yesterday, I kind of thought we were too far behind, but I didn't know (the weights) would drop off like they did."

He's fished with Mike O'Shea both days, and Bud Pruitt has been paired with Chip Hawkins. They've caught fish with a variety of techniques.

Klein's team fished the same way it did on day 1, but the spot where Chad Brauer and Sandy Melvin did a lot of their damage a day earlier was unfishable.

That duo, which fished the afternoon flight, caught only about 19 pounds today after a 44-08 sack on day 1.

"They got six bites and they caught all six, but that was down from 14 bites yesterday," Klein said. "They were able to move around a lot yesterday, but today their best bank had 3-foot waves on it."

Klein and Clay Dyer weighed six fish for 21 pounds this morning. That was about 4 pounds more than on day 1.

"I let the team down yesterday when I only weighed three fish (and missed a couple of big ones). It's disappointing not to qualify for the finals, but we did the best we could and that's the way it ended up."

Here's the Weather Channel's forecast for the final tournament day.