BACK
No New Fish? 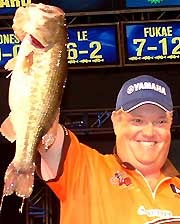 Mark Davis is on a wakebait pattern, and he said it's working all over the lake.

Mark Davis with a lead is like a 2-year-old with a box of Frosted Flakes – it would take an otherworldly force to separate the two.

He caught his super-limit on the toughest day of fishing so far, which makes his lead that much scarier.

He's working a pattern far and wide, while most others in the final Top 10 are locked on to the spawning bite in a few areas. If there was ever a day when the bed-bite should have exploded, it would have been today, with the sunny, still conditions perfect for looking.

Instead, the bed-fish are largely picked over, and few if any new fish have arrived. The lake dropped 6 inches yesterday, but the lack of new fish is largely a mystery – especially since the moon is nearly full.

Yelas could bust that – he's also running a pattern – but even he admits the odds are slim. His ultimate undoing might be that he was a fish short today.

The news is a little worse, but largely the same, for Dave Lefebre, who's 8-07 in back of Davis. Lefebre had some good sight-fish saved for today, but someone (a non-competitor) beat him there this morning.

Derek Jones, who led the cut, is currently 7th.

The sight-bite could be even worse tomorrow. The forecast calls for a 10-degree temperature drop, isolated thunderstorms and winds up to 13 mph.

Here's a look at the Top 10 after day 3. Total weight is followed by distance from leader in red.

It's definitely Davis' to win or lose. If he did win, it would he his first victory since the 2005 Smith Lake Bassmaster Elite 50.

And it would certainly become a footnote in pro bass history. He's one of the sport's true legends, but he made his name with BASS, where his career highlights include a Bassmaster Classic title (1995) and three Angler of the Year (AOY) titles (2001, 1998, 1995). He remains the only angler in history to win AOY and the Classic in the same year.

He quit BASS's top level last year over frustration with the direction of the organization, and started over with FLW Outdoors.

If he did win, it would be his first FLW Outdoors victory, and would signify to fans that his once-bumpy transition is now complete.

"I feel good," Davis said. "How could you not feel good with a lead like that on a lake like this?

"It's mine to win or lose. I just need to go out and try to put together another decent stringer. These guys could put together a 25-pound stinger. It's very hard to catch 25 here, but 20 is doable. 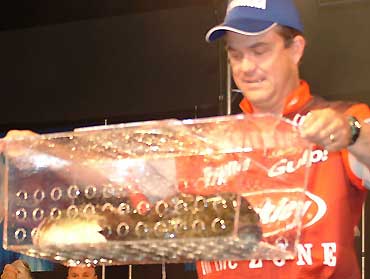 
Jay Yelas is realistic – he knows his chances are slim.

He noted that hard winds could hurt him "a little," or it could change his bite, in which case he'd need to adjust the presentation. But he doesn't think the fish would leave (again, his primarily target isn't bedding fish).

"I'd really welcome the clouds," he added. "I don't know about the wind, for sure, but I have enough different things going to where I could still catch five bass, hopefully."

He's largely been catching fish on a Bomber Long A jerkbait and a Strike King King Shad hard swimbait - waking each one. He's also throwing wacky plastics and other "typical sight-fishing stuff."

Although he would appear vulnerable if a new wave of fish came to the bank, he doesn't think that'll happen. "I think that first wave came and a lot of them have gone. There's plenty of fish up shallow – they've just been beat on pretty hard for a week and a half now.

"I didn't find any new beds today, and no new fish coming up. There may be a few, but I don't think there's any big new migration going on."

"I wanted to win one back in the '90s and I didn't. This is where I'm at right now, and it's important to win wherever you're at. It would mean everything to me to win this event."

Yelas was a fish short of a limit today, and knows the hill he faces tomorrow.

"This tournament's really done a big flip-flop from where it started out," he said. "The fish haven't moved back up – I only caught one off a bed today – so I'm mostly just fishing."

"I've caught my fish on Berkley Power Worms and a (California SwimBabes) Baby "E" swimbait from Art Berry. I've been just trying to catch big ones, and sight-fish – a one-two punch like that all week."

"It's the Tennessee River – it's supposed to be Rat-L-Traps, spinnerbaits, jigs. I had to go to Art yesterday to bum a bunch of swimbaits, and earlier I had to bum some baits from Mark. I didn't quite come prepared for the bite that's happening, and I've had to scramble." 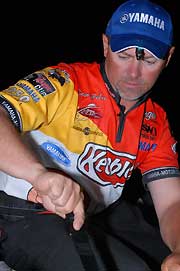 
Dave Lefebre has hope, and it lies in a potential 25-pound limit of smallmouths.

About his chances to win, he said: "Mark's got an 8-pound lead, so they're not good chances. He's been catching them all week. Every day this week, he's had a chance for a big bag like that. He's been losing fish. So he's really dialed in.

Given the fact that Lefebre had at least two, maybe three, giant smallmouths saved for this morning, his 3rd place deficit is a big surprise. As noted, a non-competitor beat him to the fish, which forced him to another area.

"It took a lot out of me, big-time," he said of the misfortune. "I went back later, and there was still a boat there. I never did get to fish it, and that hurt (my weight) pretty bad."

He went to his backup spot, where he'd planned to fish if his best spot got burned. He caught two there and lost a 5-pounder, then found a few more that wouldn't bite.

"I had the opportunities," he noted. "And there are still some big ones there. Plus, I've got seven or eight other beds I found today with a couple of keeper smallmouths.

"I think it's going to take 35 pounds (to win), so I need to catch the biggest bag of the tournament to win. It's doable. It's much easier than what people think, although the weights don't reflect it. The smallmouths are all grouped up, and if you find one, you can probably find a limit, and they're all giants."

He feels he's got a strong bead on what they like to spawn on, so he's confident he can find more tomorrow. Also notable is that he's somewhat relieved to see a large lead.

"I wish it was me, but at least now I know I don't need to go out and catch 2-pounders. I have a one-track mind now."

Also notable is he's not worried about the weather, and how it'll affect his vision tomorrow. "If I have to change, I will. I've got several spots I can just fish, and the wind might actually work in my favor.

"I don't have to bed-fish. I can go back to what I was doing in practice and cover water."

Harmon Davis bed-fished today, but his fish were about used up. He weighed a 10-03 limit and trails leader Davis by 9-10.

"I just couldn't get a big bite," he said. "The first day I caught two 6s, and yesterday I broke off a 7-pounder.

"I'm about out of bedding fish, so I've been catching fish outside the (bedding area)."

If the wind blow hard tomorrow, he plans to totally scrap his current bite and just go fishing for five. 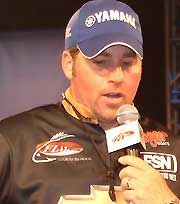 
Harmon Davis caught a 25-pound limit in practice, and will go to that pattern if he gets the wind.

"I'll throw a spinnerbait and Rat-L-Trap on the flats. One day in practice, I caught a 7-07, a 6 and two 4s off one stretch doing that. We just haven't had the wind for it.

"Hopefully tomorrow we'll have it."

About his chances to catch the leader, he said: "They're not very good. He sure has been catching them. But you never know. If they'd bite the way they did in practice – honestly, I caught 5 pounds off that one area."

Darrel Robertson's pretty much scratching his head. He was banking on the spawning bite, and can't understand why more fish haven't shown.

"I could be running out of fish," he said. "I was bound and determined there'd be more fish coming in with the full moon.

"I've got another thing I might go and do tomorrow – flipping and throwing a spinnerbait in dirtier water. I caught some good fish doing it.

"I haven't really been sight-fishing," he added. "I've caught a few fish off beds, but I've mostly been blind-casting – just throwing to dark spots and this and that.

He did look hard today for new fish, but never saw a decent one locked on.

"He'd have to leave the door open – stumble real bad – and obviously, he's not really noted for that."

> Harmon Davis on his first tour-level Top 10 since the 2003 FLW Tour Championship: "It's great. I needed the points. I finished 85th at Travis. I wasn't horribly disappointed with that, because I knew it'd be the toughest one on the schedule. But I needed it. I got everything turned around."

> Thanh Le caught four for 6-02 and is 10th. "It was between being out of fish and not being able to get a fish to bite," he said of his day. "I'll change tomorrow. Instead of sight-fishing, I'll go fishing and try to get them."

> Terry Chapman of Stanley, N.C. won the co-angler division with a 9-06 limit.

> TV personality Paul (Paulie) Teutul of American Chopper fished as a co-angler in the event. He finished 138th.

Here's the Weather Channel's forecast for the final tournament day: