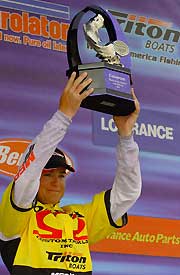 Derek Remitz had dreamed about a win at this level since childhood, and he can't believe it came so early in his career.

On the morning of day 4 at Lake Amistad in Del Rio, Texas, rookie Derek Remitz held the driver's wheel. But Steve Kennedy had his foot on the throttle, red-hot Mike Iaconelli gripped the gearshift, and late-comer Todd Faircloth held the map.

In the backseat were Edwin Evers, Davy Hite, and Kevin VanDam – all with a voice in how the day's journey would end.

Throughout the day, Remitz never relinquished the wheel. He took five hard turns for a limit worth 31-06 and sent everyone else tumbling from the truck.

With a 111-07 4-day total, he pummeled the field and won the Amistad Bassmaster Elite Series – his first-ever regular-season tour event, and only his second outing at this level (his first was the recent Bassmaster Classic, where he finished 34th).

Iaconelli caught his second-best bag of the tournament today (27-07) and improved one spot, but never connected with the quality he needed. With 103-11 total, he finished 7-12 behind Remitz.

VanDam caught 22-09 today, which was 5 pounds better than his day-3 weight, but it fell well short of his first two sacks. He moved up one spot to finish 5th with 90-13.

And Ish Monroe, last year's Amistad winner, continued his climb. He moved up from 26th into the last cut spot yesterday, and with 21-04 today, finished 6th with 87-13.

Here's the final standings. Total weight is followed by distance from winner in red.

Fishing was shortened by an hour today due to expected severe weather conditions (anglers finished at 2:00, instead of 3:00). The severe weather didn't arrive until after weigh-in, but wind and rain pelted the field, and kept many off their best water – or at least out of their comfort zone on their best stuff.

There was a window this morning when conditions were perfect for a big bite – steady but not overpowering wind, dark skies and rain.

Remitz took some advantage, but it took him nearly all day to catch his weight.

He caught the day's biggest bass (8-11), and backed it up with other quality.

He didn't waver under pressure, didn't falter, and without question dominated the final day.

"I think it's going to take a while to sink in," he said. "I can't believe (how) it came out – my first tournament, with this caliber of (pros). Every one of the (108) guys in this is capable of winning every tournament."

He was the last to weigh in, and just before he took the stage, Iaconelli (who at that point was the leader) noted that he'd won the second tour-level event he ever fished. Ike went on to say that if Remitz has the weight, he deserves to win.

Remitz had all that and more. After he won, he said: "I can remember fishing when I was 9 or 10 years old, like what Ike was saying – watching all your heroes on The Bassmasters and reading about them.

"It's been a dream (of mine to win). I can't believe it came so early. It's just unbelievable.

"It feels really good. I still can't quite believe it. But it's sinking in right now a little that I did win."

"I really tried not to think about anything today other than getting five in the boat. It was a slow day. It took the better part of the day to get my limit. I had to grind it out.

"I lost a couple late in the day, and I was just so happy to get five in the boat."

On whether he ever thought he could win his first-ever tour-level event, he said: "It's in the back of your mind. I thought about it a little bit after I found my fish on Tuesday, but it was just a thought in the back of my mind. I never realized it could actually happen.

"I thought I had the potential with the fish I found, but everything just went kind of right. I didn't lose a fish until today, and fortunately, it didn't matter."

He had a limit by noon today, which he thought weighed 26 or 27 pounds, so he knew he had a shot. What made him most nervous was the clouds and wind. He thought those conditions would be perfect for Kennedy, Iaconelli and VanDam, but in the end they all struggled.

He caught all the fish he weighed on an Omega Custom Tackle football-head jig tipped with a Yamamoto Hula Grub. He fished the tops of underwater main-lake bluffs in 25 to 35 feet of water, and never ran more than 5 miles from the launch.

The full details of his winning pattern will be posted soon. 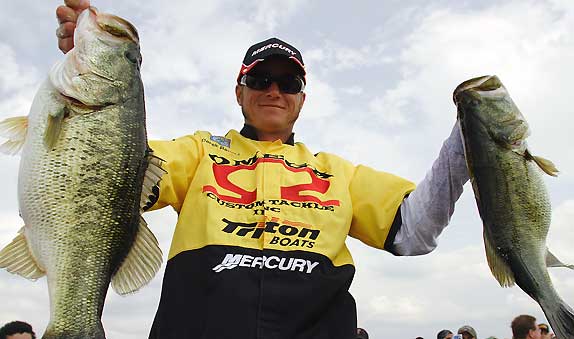 
While others flip-flopped daily, Remitz was the only angler in the Top 12 who improved his weight each day.

Ike trailed Remitz this morning by just 3-13. He did catch a 7-pounder today, but it wasn't nearly enough.

"I've got mixed emotions," he said. "Obviously, I'm a little disappointed that I came in 2nd. You always want to win.

"The other thing is, and I mean this honestly – I didn't lose this tournament. I didn't break fish off. I didn't jump big fish. I performed well, I executed well, I did everything I could to put myself in a winning position. I just got beat. Derek deserved it, and I'm happy for him."

Again, Ike won the second tour-level event he ever fished, and he knows what a win like this can mean for Remitz.

"A rookie like that coming on the scene and popping one in his first tournament – it's going to mean a lot for his confidence, and more than anything, financially he's going to be more secure.

"I remember the financial burden of turning pro, and it's more than double that now. As much as I hate to say it, I'm kind of happy Derek won."

Ike threw a California Swimbabes Baby "E" swimbait and Berkley Frenzy Diving Minnow jerkbait in lowlight periods, and flipped a 5-inch Berkley Powerbait Beast during the afternoon. His full pattern information, and pattern information for the rest of the Top 5, will be also be posted soon.

It's business as usual for Kennedy, who seems to be a fixture in the Top 12. He led day 1 with 36-plus pounds, but weighed less than half that the next day. 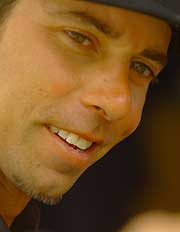 
Mike Iaconelli's happy with his finish, and he tipped his hat to Remitz.

Turns out, that was his downfall.

"It was a great tournament – just awesome," he said. "But I really feel bad about day 2. It was a disappointing day. I got hung up on that swimbait after the day I had the first day.

His mistake, he said, was he left his best area that day. He should have stayed and thrown back with plastics, which worked on days 3 and 4.

"I didn't take the time to figure them out. They didn't hit the swimbait and I left.

"But I made the (100-pound) century club again, and caught the biggest bag I've ever caught in my life. And I caught them on a swimbait, which I've never done before. It's been fun."

Faircloth entered the final day with a 5-pound deficit – amazing since he started day 3 all the way back in 39th. And he caught a solid 25 pounds today, but finished 11 pounds back.

He begins the season with a 4th-place finish, to follow up his win at least season's Table Rock finale. That's back-to-back Top 6s.

"I feel really good about it," he said of his finish. "I had 25 pounds today, and it's kind of hard to be disappointed with catching 25 pounds.

"I knew that for me to have a legitimate shot, I'd have to catch over 30 pounds today. But that still wouldn't have been enough, because Derek caught them so well today.

"I feel really good about this tournament," he added. "I had a really big day yesterday, which jumped me from 39th to 4th, so I'm real pleased with it."

What kept him from ultimately challenging Remitz was a weak 18-pound day 1.

About Remitz, he said: "I just met him, and he seems like a real nice young man. And what a way to start a career. It took me 7 years to win an event. I'm happy for him. I wish it would have happened that quickly for me." 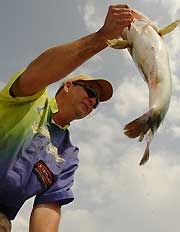 
Steve Kennedy said his ultimate mistake was on day 2, when he left his swimbait fish, instead of throwing back with plastics.

"But I had a lot of fun this week. I think this is a great lake. It's clear, and a lot like the lakes I grew up on in the North. And it's big enough that you can run and fish a pattern. It's pretty hard to beat."

About Remitz winning, he said: "I met him at the Classic, and he seems like a nice kid. He flat put it to us. It wasn't even close."

About BASS tournament director Trip Weldon's decision to cut the fishing short by an hour today, he said: "The forecast was for real strong storms to be here at about weigh-in. The National Weather Service probably missed it by an hour or two.

"I would have loved to have an extra hour, but I don't blame them. I've always seen (Weldon), on days when the weather is forecasted to be real bad, get so nervous that any of us might get hurt. No tournament is worth getting somebody killed over. He made a call that he felt was the right thing to do based on the forecast. Safety should be first and foremost, and I think that's why the decision was made."

> Remitz' father, who was at the weigh-in, said: "It's very exciting to see your son do something he set out to accomplish."

> Kennedy recently signed a deal to endorse Kistler rods, and this was his first event with the new sticks. "I threw the swimbait on the new 7'11" flipping stick," he said. "It was incredibly light and held up well. I'm impressed."

> Monroe said he threw a swimbait and flipped a Reaction Innovations Sweet Beaver this week. And he noted the swimbait is a new product from Tru-Tungsten. "I designed it for here and the Delta and Clear Lake, plus the Ish Tube. We're making everything exactly right, and it should be out in a month or two."