BassFans Weigh In On The Swindle DQ 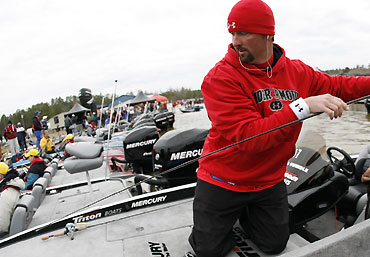 BASS's day-2 DQ of Gerald Swindle hit home with BassFans – some think he did nothing wrong, others support the ruling.

Due to the overwhelming amount of Feedback BassFan received about Gerald Swindle's day-2 DQ at the recent Bassmaster Classic, BassFan decided to print a cross-section of those letters today. Selected letters appear below.

For those who aren't yet up to speed with what happened, here's a synopsis. On day 2, a BASS photographer reported

to BASS tournament director Trip Weldon what he felt to be an incidence of unsafe boating by Swindle.

Weldon reviewed video footage, which showed Swindle driving the main river channel at Alabama's Lay Lake. Swindle seemingly had an opportunity to take the boat off pad, but chose to run through two stationary or semi-stationary boats while on plane.

Weldon ruled the action a violation of BASS Rules 5 and 6, and DQd Swindle's day-2 weight. Without his day-2 fish, Swindle didn't have enough weight to make the cut.

> To view the video footage of the alleged infraction, click here.

> The opinions expressed below are not necessarily those of BassFan or its staff.

Looks like another of the BASS chosen ones forgot he has to play by the rules. Maybe Swindle's gotten too big for his britches like Ike did, and this will bring him back around too. Look what the hard lesson did for Ike: Classic meltdown to Angler of the Year. Can't do much better than that. Maybe this will be the year Swindle gets that first BASS win.

Scot Laney said: "The U.S. Coast Guard has a rule for how far apart boats must be when passing one another, and it states that they have to be far enough apart that they don't touch."

This may be true when both boats are above headway speed, but when one is not under power and/or a sailboat there are no-wake zones to be observed. Can't speak for the Classic waters, but up here it's 200 feet. If you're within 200 feet of a vessel that's not under power, it's 5 mph as not to create a wake.

Well, Swindle's street behaviors have made their way onto the water. He only has himself to blame.

Gerald, you're still the man! You showed onstage you have a passion unequaled for not only the sport, but also the respect of the fans and sponsors. Hold your head high, Gerald – your fans and friends stand behind you brother.

Gerald Swindle has been swindled! Not by a fellow competitor, or by the rules committee, but by the great and powerful media. ESPN has shown the clip over and over again this morning, and given me plenty of time to study the cause and effects of Gerald's driving.

Still not sold? How about the fact of no water being on the camera lens? Gerald was in complete control of his own boat at all times.

Welcome to the Alabama BASS Classic, but stay off The "G-Man's" lake. BassFan wrote on day 1: (Swindle) plans to start in the lower end of the lake tomorrow, in hopes for a big fish, then head up the river for a later bite. And he doesn't want to see any more competitors there beside the three with him today. "We better not," he said. "I don't mind sharing with those three, but I don't want to see any new visitors."


If you're not able to compete, then do something to get more ESPN TV time. It works for Ike, why not the G-Man? This first-day statement and his second-day action should be enough to DQ him for more than a day, but he keeps providing in-yo'-face TV for ESPN. So as with Ike, he'll dominate the TV coverage.

Howard Rix of Portage, IN writes:

Even though Gerald Swindle got DQd, I think he's a great bass angler. Better luck next year G-Man!

All Swindle had to do was idle through the boat traffic. How much time would have been lost? Instead, he threw away a good bag of fish. More importantly, he threw away his shot at the Classic. I bet he learned a huge lesson in common courtesy.

I'm not sure about this call. From the looks of the footage, Gerald was waved on by Randy. And Gerald gave the producers and sponsors what they wanted – a hard-fishing angler in a high-pressure situation motoring on to the next hole searching for that money fish. You never see anyone complaining at launch time about someone driving too close to the media boats. As the old story goes, if you can't take the waves, stay out of Gerald's way! Keep putting them in the boat, Gerald. We'll keep watching.

Scot, there's no question that you are considered one of the most respected columnists, and I've enjoyed many of your articles. However, your opinion on the Swindle DQ is off the mark. Fortunately for those of us who realize that the safety of competitors, observers, cameramen and spectators is the priority, BASS uses rules which apply to those objectives.

Upon watching the video of Swindle's actions, it's obvious that he placed numerous individuals in harm's way, including himself. I fail to grasp what reasoning anyone could find not to penalize Swindle for his actions.

I commend BASS and Trip for the way the incident was approached and dealt with. And I disagree that Swindle took the high road. The high road would not have led him within inches of another boat at 60 mph.

First, let me say that I'm a Gerald Swindle fan. Now, were these same rules in effect in an Elite tournament last year when Iaconelli did pretty much the same thing to Larry Nixon on purpose?

Second, if you're a boater, you know that in river systems sometimes you can only run in the river channel and anywhere else can be run through only on plane where less of the boat and lower unit are in the water to stay "safely" away from stumps, rocks and other debris which lay under the water's surface.

And lastly, from the time you see Swindle on the video to the time he gains permission to pass Howell, if he were to have shut the boat down and attempted to drive through slowly, there would have been an even bigger wake and wakes to follow. How safe would BASS consider that to be?

Looking at the video, Swindle was on plane and came around the river bend which caused him to be in this situation in the first place and he made a split-second decision to pass through on plane. The governing body on this water system probably never imagined this much boat traffic (spectators, non-boaters in an event) in this stretch, or it would have been designated a no-wake zone.

If anything at all, I think BASS should have let him weigh in and finish the tournament under protest since they let him fish until weigh-in anyway.

Why weren't the camera and spectator boats addressed for this unfortunate situation? They were in the wrong. According to U.S. Coast Guard Rule 9, "Narrow Channels" (http://www.navcen.uscg.gov/mwv/navrules/rules/Rule09.htm):

These rules are precise and the BASS rules are vague. I just don't think they stick in Swindle's case.

Jamie Bryant of Cleveland, Ala. writes:

Those guys are fishing for a lot of money. That's their living. The ESPN cameraman should not have been blocking the way out. It really upsets me with the way it was handled. I may even cancel my membership to BASS, and many of my friends may do the same. For BASS to humiliate an Alabama boy in Alabama was wrong.

I hated to see Gerald get DQd. When I see them through a camera all the time, sometimes I forget that these guys are human and have emotions.

What a crock! DQing a top contender in a world-championship event when no one was hurt and the other competitor had waved him through? The media strikes again, injecting itself into an event and affecting the outcome. G-Man, you are one of the top three pros I pull for. God bless you and come back strong.

Does anyone remember what happened to Gary Klein in the Classic a few years ago in New Orleans? He was in Venice traveling down Camp Canal and some idiot thought he was going too fast and took a shot at him with a shotgun. There are people out there who think everyone in a bass boat drives like a maniac. What Gerald Swindle did was give the idiot with the shotgun justification. I fish out of a bass boat and I wouldn't blow by another boat like that and I don't like ducking BBs. Safety comes first for everyone on the water.

Life would be no fun without passionate people and Gerald Swindle is that. Years ago I was fortunate to be paired with him in the old Fishermen's Bass circuit. If memory serves me, he was a 19-year-old Kid that didn't even own a boat. And it was obvious to everyone that he was a kid with lots of talent.

Having followed his professional career, it appears to me that Gerald is now a 30-something-year-old kid. His passion has made him a fan favorite, but unbridled passion can cause us to make bad decisions. I believe this situation is an opportunity for him to put away childish things and act like a man. Looks like the first step has been taken by accepting responsibility. Let's hope we all get a second chance to grow up.

As a longtime member of BASS, I've watched as the recent enforcement of the official rules has taken precedence over common sense. What Gerald did was probably not the right thing to do, but in my opinion it didn't warrant disqualification. BASS is starting to take the fun out of fishing with all the rules.

Swindle did nothing wrong. He was waved through by the other boat and it barely even rocked after he went by. The spectator boats should have been far enough out of the way for another boat to navigate through.