Weakley's Catch As Barnett Witnessed It 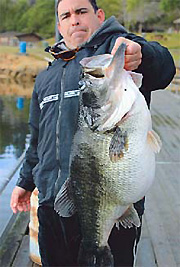 Yesterday (Mon., March 20, 2006), California angler Mac Weakley caught a largemouth bass from Lake Dixon that could have been the new all-tackle world record.

On a handheld scale, shown through videotape evidence, the fish weighed 25-01, which was nearly 3 pounds heavier than the previous record of 22-04 set by George Perry of Georgia in 1932.

Weakley released the fish before it could be weighed on a certified scale, and without measuring the fish. The reason? It was foul-hooked.

has yet to speak with Weakley, but what follows in an eyewitness account from 18-year-old Steve Barnett of Rancho Bernardo, Calif.

The story begins not yesterday, but the day before, when the behemoth was found by a young angler. Barnett said his brother Dan was a witness that day.

"My brother Dan was there with his friend Boon and they were fishing and saw Kyle on the fish," Barnett said. "Jed (Dickerson) and Mac (Weakley) and possibly Mike Winn were there. I guess they were out on the docks talking and Mac pulled out $1,000 cash and said he'd give it to Kyle, who was originally on the fish.

So to recap, according to Barnett, his brother Dan was at Dixon on Sunday, where he saw the young angler Kyle (last name unknown) fishing to the potential world record, after which Weakley offered $1,000 to Kyle if he'd get off the fish.

Barnett and his brother started high school at 9:30 a.m. on Monday morning, which gave them plenty of time to fish the first hour at Dixon.

"So we got up there super early – we were the first in line, ready to go in the lake," Barnett said. "Once the ranger opened the gate, we drove down to the lake and Dan jumped right out of the car with his rod – the fish was almost fishable from the dock.

"We got there and then Jed and Mac and Mike were already there. We thought, 'What the heck? What's going on?' We were kind of bummed out. Apparently they did it with some kind of camping pass, which lets you go before everybody else.

"All we could do was sit there and watch."

From the dock, Barnett said he had a clear view of Weakley's presentation, hookset and landing. Note that the fish was bedding in clear water.

"After less than an hour, Mac swung for the first time," Barnett said. "He ended up swinging a total of five times, and on the fifth swing he got it. (The swings) were on separate casts. He'd do a flip here, a flip there, then a swing.

"I was counting. And he was using the same bait, which is really rare – for a fish to be so interested in the same bait.

"(Dickerson) did throw his Mission Fish in there once, but didn't swing."

According to Barnett, Weakley connected on his fifth swing. "They got the fish and it went straight out to deep water – like a tow truck. They yelled, 'Get the net! Get the net!'

"Right before they netted it, Dan and I saw the fish. It was foul-hooked down the left side of the fish, right next to the dorsal fin."

The trio netted the fish about 10 feet away from the dock. "They were flipping out," Barnett said. "Then they said, 'We have to go talk to our lawyer.' So they went out to the middle of the lake.

"After 15 minutes they came back. I was talking with – I believe it was Mac, but I can't say I'm positive. It was either Mac or Jed. One of the two came up – it's the only blurry memory – and they were standing with me and Dan, and (Mac or Jed) said something like, 'Yeah, there's a weird mark on its side.'

Barnett added: "I don't know why he said that, because Dan asked him before what they were going to do with it because it was foul-hooked. I don't know – it was trippy, a little weird." 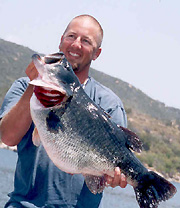 
Weakley's fish is assumed to be the same fish Jed Dickerson caught in 2003 (pictured here).

Barnett said his brother Dan then brought attention again to the foul hook. "They said, 'I don't know about this mark – what's up with that?' But Dan's like, 'Yeah, that's where you foul-hooked it."

At that point, Barnett noted there was some silence, then he remembers Mac saying, "Hey, just let the fish go – get rid of it."

But there had not been a photo taken of the fish yet, nor measurements. And it hadn't been weighed on a certified scale, which would have been delivered to Dixon on request.

Barnett said: "Everybody's saying he's got to get a picture, but Mac was getting antsy to get the fish back. They even asked him to get a measurement. Mike Winn said they had to have a measurement. Mac said they didn't need it – they'd already gotten one a couple years ago (see Notable)."

Barnett said of the release: "They let it go and it went straight down. It was the biggest fish I've ever seen in my life. And it was obviously the biggest one I've ever touched. I took the rope stringers off for the picture, and Mike Winn was holding the fish.

"When the thing was sitting in the water, an inch or two of its back was out of the water. When it was breathing, water was just rushing out back of its gills."

After the release, Barnett noted that he, Mac and the rest of the people on the dock "talked for a little while. It was cool. They're pretty cool guys."

There's no doubt the fish was foul-hooked. Weakley has readily admitted that. But was it intentionally foul-hooked?

Barnett said: "Every guy I've spoken with has asked me that same question. All I can say to every person is, they were working their jigs and doing sweet stuff. They were doing some pretty enticing things with their jig – shaking it pretty good.

"A lot of times they were working it into a bed, then dead-sticking it for a while, then they'd start working it again. All they told me at the end of it was, 'When you get a big fish like that, that noses up on your bait, you don't want to take the chance – you have to swing."

Barnett added: "I didn't say anything to that, but I didn't agree with it. I would have felt the fish before I swung, but I don't think he tried to snag it."

> BassFan will conduct an interview with Weakley in the near hours, but he was quoted in the San Diego Union-Tribune as saying he released the fish because, "We figured that was the right thing to do. I didn't want to put it on the dock, measure it and then take a chance it would die."

> Most assumed that tiny 70-acre Dixon would be a madhouse today, but Barnett said he spoke with an angler on the lake. "Nobody's there. I thought it would be full – packed – but nobody's there."

> Weakley's fish is thought to be the same fish Dickerson weighed in 2003 (21-11), and the same fish Mike Long caught twice before that. The small black spot on the lower jaw is the telltale sign. Long did a scale-sample study that he said conclusively linked his fish to Dickerson's 2003 catch.

> Can the catch be considered for the new IGFA all-tackle world record? Yes, the IGFA considers every application, and would consider Weakley's if he files it. Is it likely to be accepted as the new record? No, because his "take" (or possession) of a foul-hooked fish is a violation of California fish and game regulations.