You Can Win Big With A Jig During Prespawn 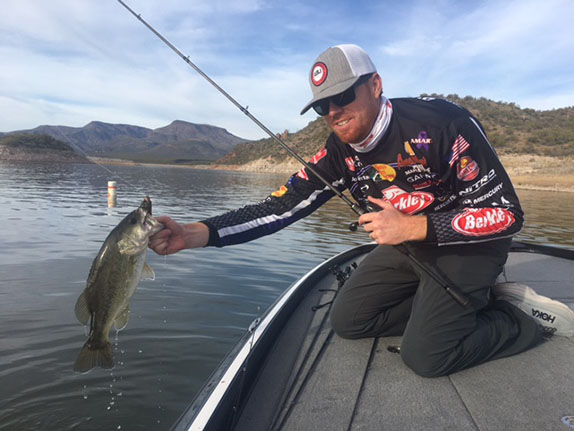 You'll get a lot of different answers from highly accomplished tournament anglers when they're asked what's the best bait for prespawn events. For 2022 WON Bass U.S. Open champion Josh Bertrand, the answer is a football jig.

"If prespawn's not the best, it's definitely one of the best phases of the year for catching big fish," said the affable MLF Bass Pro Tour competitor from Arizona. "The big females are set up and they're accessible and you get the biggest tournament weights you'll see throughout the year.

"Football jigs are big-fish baits – they're tournament-winning baits that get big bites. You're rarely going to pull up on a place and catch 10 to 20 fish in a row at that time of year, but if you keep your head down and fish for five to 10 bites a day, usually the quality is really good."

In much of the country, the scenario that Bertrand describes takes place in the February-March timeframe with the water temperature ranging from 48 to 60 degrees. At least some of the largemouth population in a given body of water will have started their push from their deep winter haunts toward the bank for the annual spawning ritual.

If you find yourself in this situation, look for chunk rock that you can fish at depths ranging from 10 to 25 feet.

"When the water's still that cold, a lot of the fish's focus is related to rock and a football jig is one of the best ways to fish rock," Bertrand said. "When things warm up the big boulders will play more, but when it's cold they're (preying on) crawfish and smaller rock is key for that. It has a lot of nooks and crannies that the crawfish can get in and move around."

At the prescribed depth range, he likes a 3/4-ounce Berkley PowerBait jig in a crawfish-imitating color such as brown or green-pumpkin/brown as long as the water's not extremely dirty. If it's a mud-fest, the fish are almost certain to be much closer to the shoreline, which creates an entirely different set of circumstances. 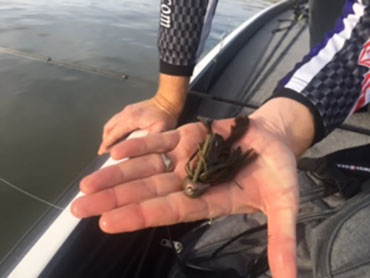 "The 15-pound line handles well on the reel and it has plenty of strength," he said. "And you want to throw it on a fast reel. That's something that's often overlooked for fishing deep, but if you can imagine and 8:1 compared to a 6.6:1, if you're getting every cast back just a few seconds quicker, that could add 20 casts to your day."

Although the reel should be fast, the movement of your jig while it's in the strike zone should be just the opposite.

"Slow is the key – there's no hopping," he said. "The jig stays on the bottom every second. Less is more."

He drags the jig along with rod tip pointed down toward the water. If he's getting hung up frequently, he can often alleviate that by raising the tip just slightly.

"If the rod is down you're in a good hookset position if you get a bite," he said. "Also, wind isn't as much of a factor – there's no slack in your line and it's not draped off to one side.

"One more thing: If you feel like a fish pounded the jig and missed it, the worst thing you can do is reel it it. A lot of times they'll knock a crayfish to stun it or injury it and they come right back.

"Leave it there and slow down even more, then make repeated casts to that same area to see if you can get that fish to go." 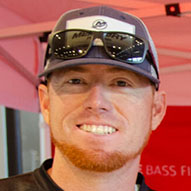