BACK
It's Happened Before 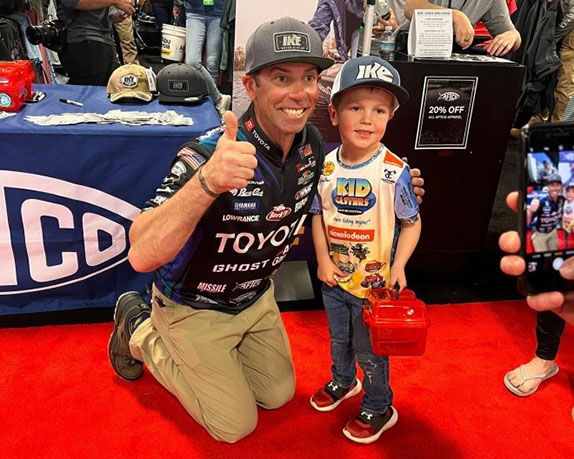 Mike Iaconelli had a lackluster season on the Bassmaster Elite Series in 2022, but he says his other endeavors, such as the Ike Foundation, fared extremely well.

Mike Iaconelli had a pretty tough time in his return to the Bassmaster Elite Series in 2022 after a three-year hiatus during which he competed on the MLF Bass Pro Tour. That doesn't rankle him all that much, however, and he doesn't plan to change a whole lot for the upcoming season.

Now more than half a year past his 50th birthday, the former Bassmaster Angler of the Year and Classic champion says he knows what he is and what he isn't. In the latter category, he's not among the most supremely gifted tournament anglers who've ever picked up a rod, which makes him prone to having a stinker of a season every now and again.

"I've been in this a long time and I know I'm not one of those naturals, like say a (Jacob) Wheeler or (Brandon) Palaniuk, who never seem to have a bad season," said Iaconelli, who finished 84th in the final 2022 Angler of the Year (AOY) standings. "I just don't have that kind of fishing ability. There are very few guys who can maintain that record of never having a bad year.

"This isn't the first time I've had a bad season. The other one I can compare it to is the year I won the Classic – I had the worst year I'd ever had in my life in '03 and it was every bit as bad as this last season. The only reason I even made that Classic was through the Opens in the fall of 2002.

"My fishing has always been a roller coaster; some good ones, some bad ones and some average ones," he concluded. "That's how it's always been for me and I can accept that."

No Rhyme or Reason

Iaconelli, who requalified for the Elite Series via his performance in the 2021 Opens, has no explanation for why his Elite Series showing was so lackluster. He finished among the Top 40 just three times in nine events and all of those placements were in the mid to high 30s. He was 76th or lower four times among a field that maxed out at 94 competitors, including a 93rd-place bomb in the opener at Florida's St. Johns River.

"It's always easier when you're a few months removed and you can look back and say well, maybe this or maybe that played a part," he said. "But when I look at the season as a whole, I didn't change anything – I didn't fish different and I didn't practice different. There wasn't an obvious thing.

"It was just one of those years and that's how it is. I went left when I should've gone right and I fished this tree when I should've been fishing that rock. I also fished three Opens and made the Top 20 in every one and ended up in the Top 5 in points."

He's not certain about this, but he says he might've taken a few more risks than he normally would in a quest to add a big bang to his return to the circuit.

"I did want to come back and win one and when that's deep-rooted in your subconscious, maybe you're fishing a little different. There may have been something in my mind that caused me to not perform as well as I did in the Opens.

"If this had happened in the second or third year of my career, it might've been crushing, but at this stage I've done everything I wanted to do. I dreamt about with the Classic, winning the Angler of the Year, winning and FLW tournament and I've done all that. I still want to win and I'm not happy about it, but that's just the way it happened. I'll go out this year with the same drive and goals and the same practice strategy and hope to have a better season."

Like a lot of anglers of his generation, Iaconelli hasn't been on the cutting edge of all the electronics advancements that are now playing such a large role in the sport. He's taking measures to make himself more proficient in the use of forward-facing sonar.

"It's something I've been working on for the past couple of months and I'll continue up to the start of the tour season," he said. "That's definitely one of the things I can do to make myself better. I'm also fishing some winter leagues around the house (in New Jersey) and I'm fishing as much as possible on my free days."

In addition, the other endeavors that are part of his brand (the Ike Live! online show, The Bass University, the Ike Foundation, a new youth tournament league, an urban fish-stocking program, etc.) are keeping him plenty busy.

"I'm fortunate to have these other things going on – that's a really good thing for me. Yeah, I had a bad competitive season on the Elites, but those other businesses are as good as they've ever been."