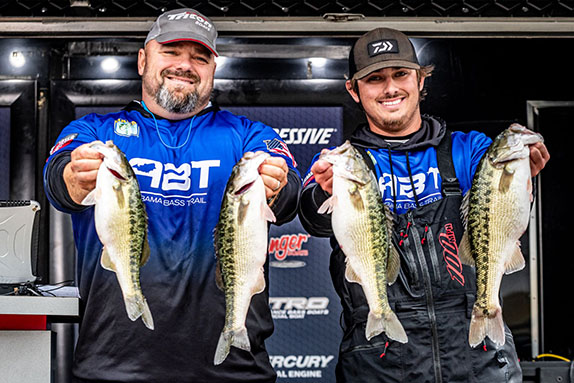 The Alabama Bass Trail team of Brian Stiffler of Columbiana, Ala., and Wesley Gore of Clanton, Ala., are leading after Day 1 of the 2022 Bassmaster Team Championship on Lake Hartwell with 17 pounds, 4 ounces.

ANDERSON, S.C. – Brian Stiffler is old enough to be Wesley Gore’s father, but on the water, they are brothers in bass fishing.

The duo showed just how well their partnership works Wednesday on Lake Hartwell in the Bassmaster Team Championship.

Stiffler, 52, and Gore, 22, teamed for a five-bass limit weighing 17 pounds, 4 ounces and grabbed the lead on Day 1 of the final tournament of the 2022 Bassmaster season. A total of 250 teams from 37 states and three foreign countries are competing this week for a purse of $120,000 to be split by the Top 50 tandems.

After the Day 2 weigh-in, the Top 3 teams (six anglers in all) will have their weights zeroed and fish individually for two more days in the Bassmaster Classic Fish-Off. The winner of that portion of the tournament will clinch the final spot in the 2023 Bassmaster Classic scheduled for March 24-26 in Knoxville, Tenn.

But first things first, and that begins with Stiffler and Gore. The Alabama Bass Trail teammates weighed five quality spotted bass on Wednesday, but the catch didn’t come easily.

“We ran around with two tiny fish for a long time today,” Gore said.

But the bite eventually turned for the teammates.

“We caught everything we weighed in about an hour and a half,” Gore said. “We were fishing for big spots and 3-pound spots are pretty hard to come by here. They’re gold.

“We were fishing a little bit of everything but we went deep, to the bottom of the lake, and finally got a bite and ran with it,” Gore added. “There was one key adjustment. (Stiffler) noticed it.”

“And then (Wesley) caught them,” Stiffler added, nodding toward his young teammate. “Sometimes one word can key him. Wesley is extremely good at what he does out there.”

Gore, who hails from Clanton, Ala., was a standout angler at the University of Montevallo (Ala.) and fished the Bassmaster Opens this year. Stiffler, who lives in Columbiana and co-owns Hammer Fishing Rods, made it clear his primary goal this week is to finish among the Top 3 teams at Hartwell so Gore can get a shot in the Bassmaster Classic Fish-Off on Friday and Saturday.

Wednesday’s start was delayed by 90 minutes due to heavy fog in the area. The air cleared enough to get the field on the water, but hazy conditions remained. Coupled with a transitioning bass bite, fishing was less than ideal on Day 1.

A pair of teams are tied for second place – Mark Lodge and Shawn Grover of the Maine B.A.S.S. Nation Team Trail and Collin Smith and Brady Kimbrell of South Carolina’s 5 Alive Sunday Series. Both tandems weighed 16-10 on Day 1 and trail the leaders by less than a pound.

Lodge and Grover said they had 20 to 30 bites, including a limit within the first hour. Lodge said the delayed start didn’t force a change of plans.

“We found fish yesterday and we left them biting,” he said. “The spots were biting again this morning. We got a little more dialed in today, so we should be able to catch another limit tomorrow.”

“Some of these guys have an advantage of knowing this lake better than we do, but I feel whatever suits your style, you can find it out here,” he said.

Hartwell is home water to Smith and Kimbrell and they proved their proficiency.

“We covered a lot of water and took it one bite at a time,” Smith said. “We knew with the short day, we’d have to make it happen quickly. Luckily by about 12 o’clock we caught that one largemouth that was almost 5 pounds and that really helped us. It came deep. From there, we were able to piece together some more spots in the 3-pound range.”

Wednesday’s fog did throw a curveball to the South Carolina pair, though.

“We knew we had some places we could get to right off the bat and catch some largemouth early, but obviously we couldn’t this morning,” Smith said. “But the first place we pulled up on, we caught a spot that weighed 3 pounds. Everything just fell into place from there. We really did weigh five fish today that were caught in five different places.”

Chris Nelson and Jeremy Strong of the Palmetto Boat Center Team Trail (South Carolina) are in fourth place with 16-03, and Kyle Zacharuk and Chelsea Webb from Canada’s CSFL are fifth with 16-01.

Day 2 is scheduled to begin at 7 a.m. ET from Green Pond Landing and Event Center, with weigh-in starting at 3 p.m.