A Northern Perspective On Flipping/Pitching 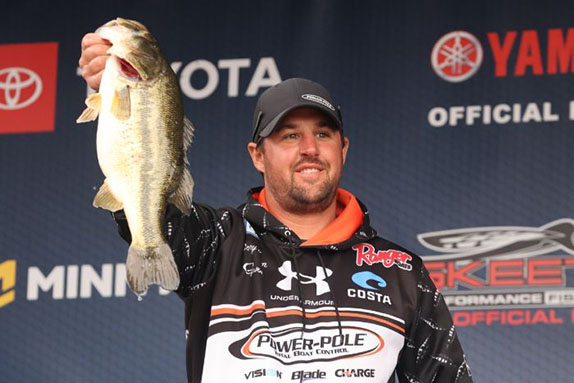 Cory Johnston said he doesn't even possess a regular-size jig, always opting for a compact version for flipping and pitching.

Northern tour-level anglers Cory Johnston, Cooper Gallant and Seth Feider love to fish cover, and in certain situations, downsizing their baits makes all the difference. Downsizing isn’t always about filling a limit; there are vital situations when a more compact bait shows out.

Johnston grew up with a hockey stick in one hand and a flipping stick in the other. Sure, he catches his fair share of smallmouth on a spinning rod, but his passion is pitching and flipping.

His ace in the hole is a compact Punisher Mini Flippin Jig. “Flat out, you catch more fish and get more bites. I don’t even own a regular-size jig,” Johnston said. Johnston chided his buddy Brandon McMillan that when they fish together in Florida, Johnston gets just as many bites on a compact jig, if not more than McMillan’s full-size jig.

Do bigger baits catch bigger fish? Johnston said there are situations where that holds, but with ever-increasing fishing pressure, a smaller jig is what it takes to get bit.

“Down south, with a smaller jig, you will get smallmouth, largemouth and spots. Like up north, you will catch as many smallmouths as you will largemouth.”

Anyone who knows Johnston and his brother Chris can attest to two traits – they are meticulous about tackle and secretive about most everything! But Johnston did explain why they chose Punisher Jigs, and it had little to do with them being made in Canada, not far from where they live. “Everything has to be perfect,” Johnston said.

They worked with owner Jarrod Dean to design the perfect head, weed guard and hook so they could fish anywhere. After extensive testing, they settled on a pair of Gamakatsu jig hooks, one to be fished on braided line and the other on fluorocarbon.

The Johnston brothers worked with Daiwa to design a 7’5” rod especially for a mini-jig. Though the tip has a lighter action, the rod has plenty of power and can handle a 1 1/2-ounce weight. Paired with an 8.8:1 reel spooled with 65-pound Seaguar TactX braided line or 20- to 22-pound Seaguar Tatsu fluorocarbon, the cover dictates line choice.

“The more flips you can get in, the more fish you are going to get in front of, the more bites you will get,” he said. “If they aren’t going to eat on the first couple of hops, they can starve, and I’ll put it in front of another fish." 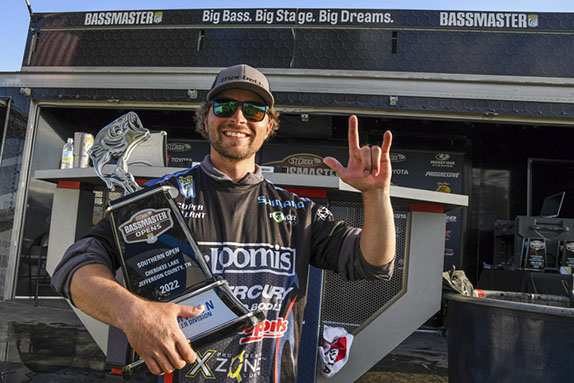 
Cooper Gallant uses just one bait for flipping and pitching.

Fellow Northern angler Gallant will join the Canadian contingent on the Bassmaster Elite Series in 2023, and while Gallant is also a big fan of Punisher Jigs, he’s learned that small baits get more bites. When bass are chewing, they’ll bite a 3- or 4-inch bait regardless. But especially when he’s faced with a cold front, or when he’s fishing a river system and no current is being pulled and bass are not active, he'll opt for the smaller offering.

“I feel like the size profile, the difference between the 3 and 4 inches, if you get on a pod of fish and they are on the verge of whether they will eat, I think that 1 inch goes a long way,” Gallant said. "That smaller profile could be the difference between getting a bite or not. If the fish are fired up, they will eat a smaller bait like they would a bigger bait anyways. I’ll throw a smaller bait 80 percent of the time because whether the bite is good or not, you will get more bites."

Feider predominantly fishes a full-size jig, his signature series Outkast Tackle Stealth Feider, in a 1/2- or 5/8-ounce during a tournament. But he has a unique take on practice; he wants to get as many bites as possible, and nothing outproduces a 4-inch Texas-rigged tube. Not only that, it reduces the chance that he’ll hook the bigger fish in the area, leaving them hungry for a jig once the tourney starts.

“Tube-flipping used to be big when I started bass fishing, but once the beavers and new style baits like Brush Hogs came out, everybody got away from it,” Feider said. 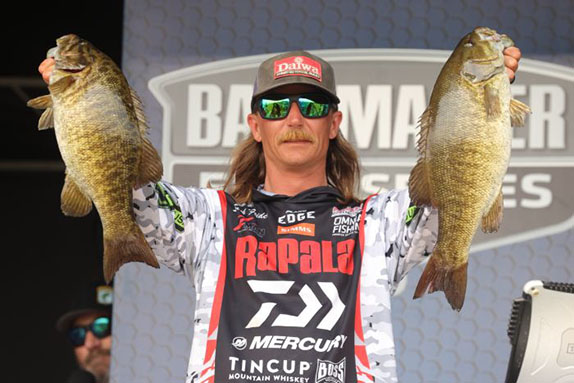 
Reeling down on the fish is Seth Feider's primary key for flipping.

The key to flipping and pitching a tube is rigging it just right.

“I don’t like the big 4.5-inch tube. I get them in bulk; 4-inch with a 4/0 extra-wide gap hook just barely coming through the top with barely enough plastic to hold it on the hook,” he said. “Rigging it 1/4 to 3/8 of an inch from the head of the tube makes the tube ball up on the hook. resulting in missed fish due to poor hook penetration.”

Feider just barely skin-hooks the tube through the head, with the hook coming out 1/8-inch from where the tentacles start. He’s okay with only getting one fish per tube, viewing that as a small price to pay.

“A tube on a lighter weight falls very erratically on an unpegged Texas rig,” he said. “The tube will fall the same even when pitching around wood or sparse grass. If I’m flipping in wood or brush, my tube will still follow my sinker; I will not get into a position where I have my bait and sinker on opposite sides of a twig.”

The key to Feider’s success is the hookset.

“I reel down on every fish when they bite. I want that rod bent when they pull,” he said. That’s why he prefers a moderate fast-action casting rod that is perfectly parabolic.

“I lose more fish on a stiff rod flipping and pitching, especially when pulling them out of the grass. Some guys think they need a real pool cue in the grass, and you hit them and get them balled up, then you pull too hard. Something has to give, and most times, it’s the fish's mouth,” Feider said.

“You must grind the reel handle and get them out. You hook a 5- or 6-pounder in milfoil it’s going to cut through all that."