Quality Bites Should Be Plentiful At Hartwell Open 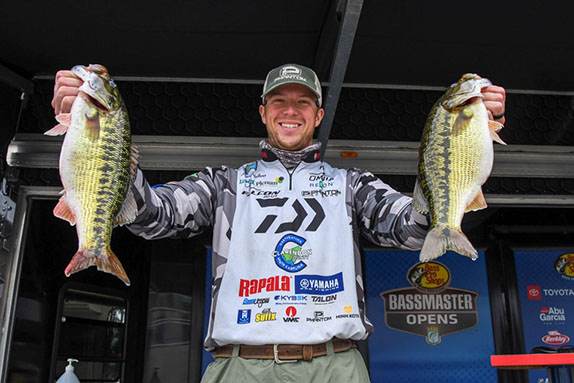 With 7-, 8- and even 9-pound bass being caught on a regular basis this year, South Carolina native Jayme Rampey says Lake Hartwell is fishing the best he has ever seen, and he expects that to continue when the final Bassmaster Southern Open begins this week.

“It has fished really good all spring and all summer,” Rampey said. “I’d say it has fished the best and taken more weight to win tournaments this year than I have ever seen it. It has been phenomenal this year.”

Tournament days are Thursday through Saturday with teams launching each day from Green Pond Landing and Event Center beginning at 7:15 a.m. ET and weigh-ins scheduled for 3:15 p.m. The full field will compete the first two days before the field is cut to the Top 10 for the final round. The event’s winner will qualify for the 2023 Bassmaster Classic if the angler has fished all three Southern Opens.

The Savannah River impoundment is no stranger to historic moments. This year alone, it hosted one of the most compelling Bassmaster Classics ever as Jason Christie fought off Kyle Welcher and Stetson Blaylock to claim his first win in pro fishing’s biggest event. The last time Hartwell hosted an Open, in September 2020, South Carolina’s Patrick Walters claimed the title, edging Rampey by 2 pounds.

For the past three or four years, Lake Hartwell has had higher-than-normal water levels, which is part of the reason Rampey believes the lake is fishing so well now.

“The lake has been high for three straight springs, and I think a lot of those bass got to spawn and the bait got to spawn,” he said. “That is the size of fish that are out there now.

“Those 3- to 5-pound fish, which should be 3 to 5 years old, there’s a pile of those right now. You used to not catch a lot of 3-pounders, but now in the last few tournaments, I’ve seen 8-pounders and 9-pounders. Crazy stuff for here.”

Not only are the spotted and largemouth bass growing larger, so are the numbers and size of the blueback herring.

“The herring roam so much and move so much that someone may not have a clue they are on them and show up Thursday and win off of one place,” Rampey said. “There are more bluebacks and big bluebacks than I have seen in years. The funny thing is, they are everywhere.

“Typically, they are (down) midlake, but I have seen big bluebacks up the rivers. There is a healthy population right now.”

Rampey said anglers will be able to do a lot of different things to catch both spotted and largemouth bass in this tournament, from fishing way up the Tugaloo and Seneca rivers to fishing clear water closer to takeoff. Both species will be a factor as well.

The herring will be roaming the main lake and the spotted bass will follow. Offshore brush and cane piles will also hold fish. Topwaters, swimbaits and even some finesse techniques will come into play.

Meanwhile, the shallow bite has been excellent all year and Rampey expects that to continue, especially with some stained water likely entering the lake from the hurricane. Docks, laydowns and points will be the main draw and if the water rises enough, some of the bushes might factor.

The shad population in the creeks and shallow areas is also prominent right now.

“You’ll see a lot of offshore stuff and schooling fish,” he said. “You will see people running brush and throwing spybaits and topwaters. And then half the field will be fishing shallow because the shallow bite is just as good.

“The whole lake is fishing well. It is going to make it challenging because you can go to the bank and get a bite and then go offshore and get a bite. It has been very interesting to me how many bass are showing up.”

With bass showing up everywhere on the lake, Rampey anticipates it will take a lot more weight to win this time around than it did in 2020.

Keith Poche currently leads the overall Bassmaster Opens standings with 1,170 points with two events remaining. He is followed by John Soukup with 1,093 points and David Gaston in third with 1,091.