BACK
Six Straight In Top 10

Ebare Had A Sizzling Two-Tour Summer 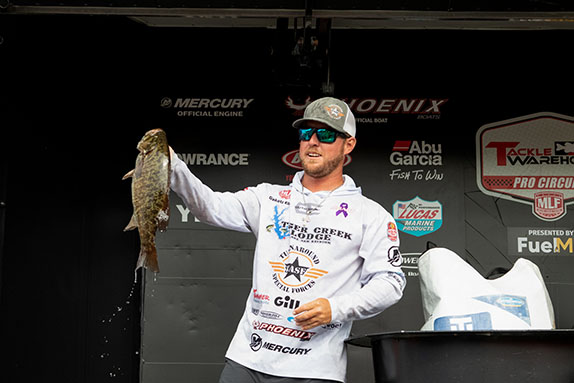 Dakota Ebare caught quality fish at every stop once the calendar turned to summer.

When this summer rolled around, Dakota Ebare's tour-level ledger included two Top-10 finishes in 3 1/2 seasons as a pro, including a runner-up showing earlier this year in the MLF Bass Pro Tour event at Lake Fork.

To say that the Brookeland, Texas resident had a red-hot summer would be a severe understatement. Competing on both the BPT and MLF Pro Circuit, he posted six consecutive finishes of no worse than 6th place.

The 30-year-old completed his initial BPT campaign at No. 4 in the final Angler of the Year (AOY) standings. On the Pro Circuit, he ended up 9th.

"I've put in a lot of hard work and things are finally starting to click now," he said. "I think most of it is mental – having a positive attitude and not fishing too conservatively. If you're going to be successful, you can't be worrying about anything else."

Good from the Get-Go

Ebare, who fished collegiately at Tarleton State University in his adopted home state (he's originally from Louisiana), has never really struggled in the professional ranks. He finished 27th in the Pro Circuit (then-FLW Tour) points standings during his rookie year in 2019 and got better from there. He was 14th the next year and 10th in 2021.

He still hasn't claimed his first tour-level victory, but what he did after Memorial Day this year suggests that will likely come soon. Beginning with the BPT derby at Watts Bar Lake, his placements went 3rd, 2nd, 3rd, 6th, 2nd and 4th, with the latter runner-up coming in the Pro Circuit TITLE Championship at the St. Lawrence River.

It's not like he was dialing everything in during practice. On most of those occasions, particularly the BPT events that are spread across six days, the programs that led him to high finishes were developed during competition.

"I practice as much as they allow, but I'm not big on getting a bunch of bites in practice because that can lead you in the wrong direction," he said. "In the BPT format, there's more than a week between the first day of practice and the last day of the tournament and things change a lot, and that makes you fish freely and keep an open mind each day.

"If you can fish like that all the time, the format or the tournament doesn't really matter. It gives you a chance to be successful."

Does it the Right Way

Ebare had his worst BPT finish (a still-respectable 47th) in the season opener at three previously little-known venues in his native Louisiana. He just missed the Knockout Round the next time out as well (41st at Lake of the Ozarks) before getting on his roll.

He said he never felt as if he didn't belong among the star-studded BPT field.

"There was one day at Lake Fork when I kind of had a 'fanboy' moment," he said. "I was sitting in the parking lot and Kevin (VanDam) and Skeet (Reese) and Ott (DeFoe) pulled up and I was thinking wow, those are the guys I grew up watching.

"But when it's time to put the boat in the water, you throw that out of the equation and it doesn't even come to mind. You just fish the conditions and the fish and do the best you can.

"What I accomplished this year was really humbling and special to me and I've very thankful for it," he continued, "but if you ever line up against these guys thinking that you can't compete, they'll smoke you. The way I looked at it was I earned that spot (with his Top-10 finish in the 2021 Pro Circuit points), I worked hard to get there and I deserved to be there."

He said the highlight of his year wasn't any of his high finishes. It was being named the winner of the Forrest L. Wood Sportsmanship and Community Leadership Award at the TITLE.

"I got that at the Championship and I'd fished the last Forrest Wood Cup in 2019," he said. "The whole year was a blessing – I met a lot of great people and things got better and better through the course of the year. That (award) is something that's a little different and I was thankful and honored to get it."

Now his goal is to keep his roll going into the 2023 campaign.

"Any success that I've had has been a product of time on the water and I don't plan to change my work ethic any," he said. "I just try to get a little bit better every day and if I can do that, I should have success both on and off the water." 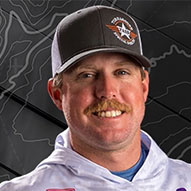