BACK
Revolutionized The Sport 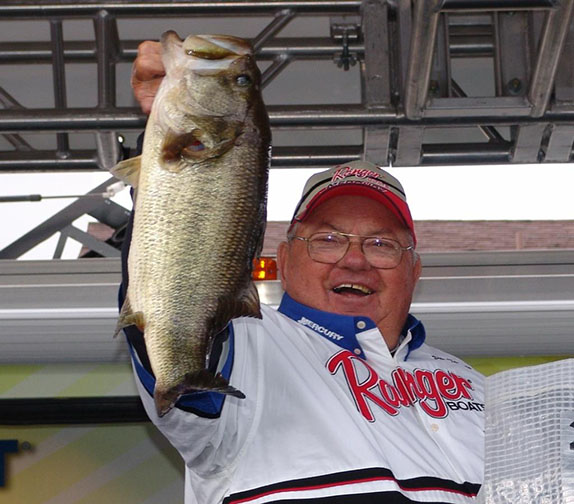 Dee Thomas was a dominant force in Western tournaments before and after his short stint on B.A.S.S.' national tour.

By Pete Robbins
Special To BassFan

Bayless Dewayne “Dee” Thomas, a California tournament angler who is renowned for refining the flipping technique and spreading it eastward in the 1970s, has died at age 85. Thomas had battled lung cancer for years had been on bottled oxygen for well over a decade as the result of a smoking habit that he’d managed to conquer many years earlier, but continued to fish seriously and competitively even after the disease was diagnosed as inoperable.

Thomas was a member the Bass Fishing Hall of Fame, the National Freshwater Fishing Hall of Fame and the California Outdoors Hall of Fame. He won the 1975 Bassmaster Arkansas Invitational on Bull Shoals, competed in the 1975 Bassmaster Classic on North Carolina’s Currituck Sound and the 1996 Red Man (now BFL) All-American in Arkansas. Despite all of those achievements, he is best known for revolutionizing the sport by taking the technique then known as “tule dipping” and transforming it into the flipping and pitching techniques that are now standard. As such, his influence extended not only to direct mentees like Gary Klein and Hank Parker, but also to the Hall of Fame careers of anglers including Denny Brauer and Tommy Biffle.

"He shaped and molded the biggest revolution there's ever been in all of bass fishing," Parker told BassFan in 2010. "The single most impactful method of fishing was developed by Dee Thomas, and Dee Thomas alone. Dave Gliebe, Gary Klein, Denny Brauer and other guys followed suit, but the new ground was plowed by nobody but Dee.

"When I won the Classic (for the first time) in '79, several magazine and newspaper articles mistakenly mentioned that I was the inventor of flipping, and I immediately corrected that. It was absolutely untrue and I never led anybody to believe it was true. Dee Thomas was the king and the master and I was unworthy of being mentioned in the same breath. Let that truth stand."

Thomas was born in Alabama, but moved to California at age 13, where his passion for fishing was stoked by chasing striped bass. He did not catch his first largemouth bass until he was 19 years old, and soon thereafter learned about the regional “tule dipping” technique, which involved placing a jig into dense cover using a 10- to 16-foot pole with a short length of braided line affixed to it, and then winching unsuspecting bass into the boat.

He began fishing tournaments in the 1970s, and because his competition wanted him to use more “conventional” tackle than the tule dipping setup, he was forced to add a reel to the pole, which actually enhanced his ability to present lures silently and accurately. When tournament directors received negative feedback on the advantage provided by the long rods, he was asked to suggest a length and settled on 7 feet, 6 inches.

Early models were telescopic or two pieces so that they could fit in the rod lockers on the smaller bass boats that were popular in that era. He befriended and worked closely with Dave Myers of Fenwick, another avid angler, to develop the perfect rod and after numerous iterations they created one of the earliest true flipping sticks as part of the Lunker Stik lineup. It sold well in an era when most standard bass rods were less than 6 feet. Thomas remained affiliated with Fenwick for over two decades, until Myers left the company.

With his new technique increasingly refined, Thomas headed eastward in 1975 to fish the still relatively new Bassmaster Tournament Trail. He admitted that at his first stop, Toledo Bend on the Texas/Louisiana border, he was overwhelmed by the abundant cover and struggled, but he won the next tournament on stingy Bull Shoals and its $3,547 top prize. After fishing the 1975 Classic, Thomas fished four B.A.S.S. events in 1976, traveling as far as South Carolina and Virginia to compete, but ultimately he elected not to go on the road full time. He was a produce manager at Safeway, and with a young family, the consistent pay, union benefits and pension combined to make that decision easy for him.

He continued to be a voracious and feared competitor on Western circuits, with numerous West Coast Bass, Western Bass Fishing Association, WON Bass and National Bass Association victories and Angler of the Year titles, as well as winning more than 25 boats. 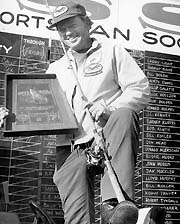 
Thomas won the second B.A.S.S. event he competed in at Bull Shoals Reservoir in 1975.

While Thomas elected to stay primarily in the West, his influence was felt on the national stage through others’ success. After returning home to California, Thomas tutored his friend Dave Gliebe on the technique and Gliebe used it to win B.A.S.S. Invitationals on Toledo Bend and the Kissimmee Chain in 1977 and 1978, respectively. Gliebe also qualified for three consecutive Bassmaster Classics.

Thomas’ most profound long-term influence, though, came in the form of Gary Klein, who went on to become a 30-time Classic qualifier and a co-founder of Major League Fishing. At the time of their first meeting at Lake Oroville, Klein was a confident and impressionable 15-year-old.

“I was a cocky kid and walked up to him and pretty much told him that one day I’d be as good as him,” Klein recalled. “He looked me in the eyes, gave me a big bear hug, and said ‘Bring it on.’

"When he won at Bull Shoals I was still in high school, but he challenged me all the time and never gave me anything. He would lead me in certain directions but leave me to figure it out. He kept prodding me to get better. That made me even more determined to compete and by the time I left California in 1979 to go on the B.A.S.S. circuit, I felt that I could compete with Jimmy Houston, Roland Martin and Rick Clunn.”

Klein wore his mentor’s influence on his sleeve in those early days: “I flipped and that’s all I did. I had seven flipping sticks in my rod locker, so I didn’t do anything else. That first year on the circuit it seemed like I’d talk to him every other day.”

Western tournament pro and radio personality Kent Brown explained that while Thomas is rightfully known as the “Father of Flipping,” the idea that all he did was dip a big bait on heavy line couldn’t be further from the truth.

“Flipping was what he gravitated to, but it wasn’t all that he could do," Brown said. "In fact, in (later) years he fished a Power Shot and a Senko a lot. One of his last big pro-am wins came fishing Gitzits.”

Klein added that “Dee won just as much money with a spinning rod as with a flip stick” and was also an exceptional cranker. “He pretty much brought the Bagley’s DB3 to the West Coast. He would throw it on a 7 1/2-foot flip stick.”

Brown believes that Thomas’ influence has been a broad economic driver for the bass fishing industry for over four decades, and continues today, even if younger anglers might not be aware of it.

“Every major rod company today still has multiple flipping sticks,” he said. “But think of all of the other things that came from that one technique. It’s not just rods and lines and hooks. He’s the reason they put raised casting decks in bass boats. He was also one of the first to put a weed guard on a jig.”

In addition to Fenwick, Thomas had long term sponsorships with Ranger Boats (“He was a Ranger guy through and through,” Brown said) and Mercury Outboards.

Beyond his family, tournament fishing and mentoring (and occasionally hectoring) younger anglers, Thomas had few other interests. He was a passionate dog owner who in later years said that the only reason he was staying alive was for his pets. “His other hobby was fishing for something else,” Brown said, including crappie and stripers.

While Thomas had his own extended family, Klein was proud to say that they “developed a father/son relationship.” Klein made it a goal to educate others about his mentor’s legacy, since “a lot of anglers who have a flipping stick on their decks have never heard the name Dee Thomas.”

Thomas’ wife Terry, his partner of over 40 years, passed away in 2016. “Terry was his rock,” Brown said. Between them, they had five children and numerous grandchildren and great-grandchildren.