BACK
What’s All The Fluff About?

Northern Anglers Give Up Some Intel On Hair Jigs 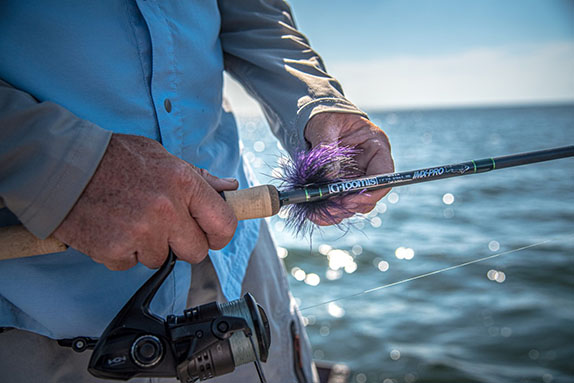 Bassmaster Elite Series angler Douglas prefers the Outkast Tackle Feider Fly over all other hair jigs. Tying these jigs just right is an art and they've nailed it, he says.

Bassmaster Elite Series anglers Josh Douglas and Jeff Gustafson chew the fat now and then on the latest and greatest techniques for catching northern smallmouth bass. They agree on the drawing power of a marabou hair jig.

It doesn’t look like much, but few strategies can solve a stubborn smallmouth like a perfectly tied hair jig.

Douglas learned about the effectiveness of hair jigs from reigning Bassmaster Angler of the Year Seth Feider, who picked up on the technique while fishing Sturgeon Bay and brought it home to Mille Lacs Lake in Minnesota, where he taught it to Douglas.

After ice-out, Douglas seeks out the warmest water, knowing that getting a bite can be challenging when water temps hover in the high 30s. He’ll seek out little shallow, protected pockets off the main basin where smallmouth will spawn. Boulders, sand patches and transitions are prime targets.

A green- or brown-colored hair jig works best early in the year when emulating immature crawfish meandering along the bottom. As the water temperatures warm and bug hatches go into full bloom, he’ll switch to black or brown. Once summer arrives, perch becomes a player.

While some anglers believe a hair jig is most effective when they can visibly see it, Douglas will fish it blindly. Nor do the conditions need to be slick and calm. He does prefer gin-clear water. He’ll let the wind move him across the flats and will cast to targets that he can see and slowly retrieve the jig back to the boat.

“I’ve caught them in 12 feet close to the bottom, in 22 feet right on the top feeding on mayflies and bugs and as shallow as a foot of water,” Douglas said.

For Gustafson, Rain Lake and Lake of the Woods in the Canadian province of Ontario where he resides call for a different approach with the same mousetrap.

“We use them a lot more on specific pieces of cover; logs, boulders and cabbage clumps," he said. "Often smallmouths will suspend around these pieces of cover, and if you swim a hair jig in their face, they won't turn it down very often."

The best part is that he sees most of the bites.

Sure, it can be fun to whip a topwater around during the mayfly hatch, but the landing percentage already favors the fish. Instead, fishing the “fluff” allows for sure hooksets and smallmouth that stay pinned until they’re in the boat, providing you are fishing the right gear, They’re most often hooked in the roof of the mouth. 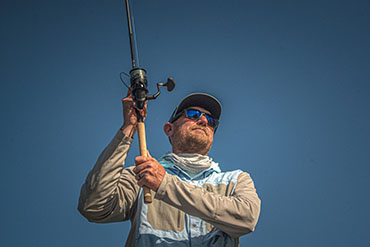 
Super-long casts are key for Douglas to get his hair jig as far away from the boat as possible and avoid spooking smallmouth.

“I’m always going to throw the heaviest that can cast the furthest,” Douglas said.

More importantly, the rod's parabolic action keeps the hooks from tearing out. He prefers a 7-foot leader of 8-pound Seaguar Tatsu so that the knot isn’t inside the spool, allowing the braided line to fly off the spool on 75- to 100-foot casts.

He'll also thread a leftover piece of a soft-plastic stickbait onto the hook’s shank to add weight that can help when casting into the wind and when fishing deeper water.

If he’s fishing in 3 feet of water or less, he’ll start reeling. In deeper water, he’ll count it down.

“I’ll cast it and count it down to the depth they’re at or where smallmouth are willing to come up from deeper water to eat it,” he said. “Sometimes, if they are eating bugs, I want them to come up and eat it. But if they are eating crawdads, I want it to hit the rocks. Generally, the deeper I'm fishing, the slower I reel it.”

Smallmouth are whimsical by nature, so he’ll rotate through various hair colors and alter his retrieve before resorting to a jerkbait to draw a reaction bite.

“There is no wrong way to fish this bait," Douglas said. “You won’t even feel the bite; the line will get heavy and you just keep reeling it before drilling the hook home.”

Gustafson prefers the same rod as Douglas but in a 2-power for added hooking power and better control over the fish. He ties his jigs on a Gamakatsu 604 No. 1 hook; it sounds small, but that hook doesn’t flex and the point holds up.

Gustafson spends much of the winter tying marabou jigs while watching hockey games. However, his buddy Bryan Gustafson, who owns Lake of the Woods Outdoors, sells the Bass Tactics Elite Marabou jig that will suit any angler chasing trophy smallmouth.