Cunningham Ready To Take A Step Up 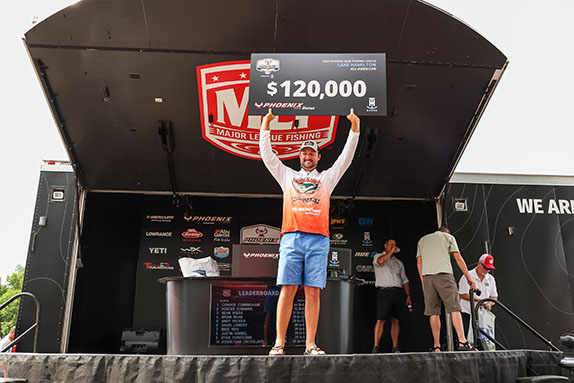 Connor Cunningham was the only competitor to catch double-digit bags on all three days at the BFL All-American.

Connor Cunningham hopes to follow the route of several top tour-level competitors and use his victory in the BFL All-American as a springboard to a successful pro career. He's not quite ready to go all-in on that, however.

The 30-year-old Missourian, a salesman for a beverage distributorship, will accept the priority qualification for the 2023 MLF Pro Circuit that his recent victory at Arkansas' Lake Hamilton garnered him. He'll keep his day job, though – at least for the time being.

"Of course, this is all new for me, but I've already talked to my boss about it and I think they're going to work with me," he said. "That's exciting. Hopefully the day will come when I don't have to have another job."

He certainly did a nice job on the fish at Hamilton, winning the country's most prestigious grassroots derby by 11 1/2 pounds over the runner-up. The only competitor to weigh double-digit bags on all three days, he finished with a 44-04 total and earned $122,000, which he'll use to fund his initial foray into the pro ranks.

Fished Where Others Didn't

The prevailing opinion was that the All-American would be won offshore. The spawning ritual was well into the past and the fish had had plenty of time to migrate to the ledges.

Instead, Cunningham triumphed from the shallows, pulling the vast majority of his fish from water that was 2 feet deep or less. A River2Sea Whopper Plopper 110 was his primary offering.

He'd made a pre-practice trip to the venue and idled around for 2 days, checking out deeper stuff with his Garmin LiveScope electronics. He also started out there on the official practice day just prior to the start of the tournament.

"I thought I could catch 10 pounds or so and I felt comfortable that I could get a limit," he said. "But I love throwing a topwater and after that I decided to try it just to see if by chance it would work, so the second half of the day I threw it.

"I caught some good keepers, so I figured I'd at least start (Day 1) with it, and I ended up staying with it the whole time. It was just a perfect storm. I was catching five to seven keepers a day and I never really felt safe about catching a limit. It was fewer bites (than could be had offshore), but they were better quality."

The shallow fish could be caught anywhere on the lake and he covered a tremendous amount of water each day.

"I'd see lots of fry up on the bank and it felt like it was a really late postspawn bite. They could be on any bank, whether it was a bluff or it was slick or it was in a sandy-looking pocket. Whenever I'd see fry around, I'd start to get that tingly feeling.

"I had one stretch where I caught three that I ended up weighing in and one in practice, but other than that I couldn't retread a place and catch another one. There might be multiple fish swimming down the bank or hiding out, but they got educated once you pulled their buddy out of there."

He gave a shout-out to his Day-1 co-angler, who promised he wouldn't reveal anything about Cunningham's shallow-water program to his Day-2 boater and kept his word.

"I saw him out there fishing a brushpile with his Day-2 guy," Cunningham said. "I owe that guy a lot for keeping it under his hat."

"The only other thing I did was put size 2 round-bend Gamakatsu hooks on it," he said. "I feel like the fish slap at the bait a lot with their mouth closed and with those on there you actually have a chance of catching them. With an (extra-wide gap) hook the point gets turned in and you don't get that chance."

He caught a couple of weigh-in fish on a Strike King 6XD crankbait from depths in the 12- to 15-foot range. One of them resulted in a significant cull on Day 2.