BACK
He Started It All 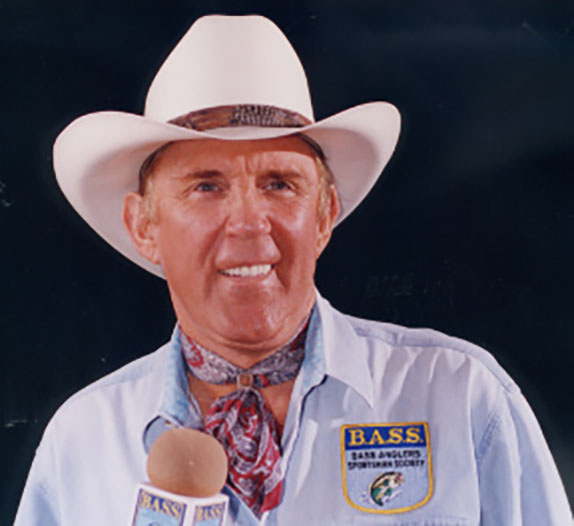 Ray Scott was an insurance salesman prior to founding the Bass Anglers Sportsman Society in the late 1960s.

Ray Scott, the founder of the Bass Anglers Sportsman Society (B.A.S.S.) and the most important figure in the history of the sport, died in his sleep of natural causes on Sunday night at age 88.

Scott was a natural born salesman, and though he engaged in a number of business and civic ventures during his lifetime, he is best known for taking what had once been a sleepy, backwater sport which was perceived to be rife with dishonesty and playing a key role in transforming it into a multi-billion dollar industry, with the Bassmaster Tournament Trail as its centerpiece.

Scott was born August 24, 1933 in Montgomery, Alabama, and raised in poverty in that city. He attended Howard College in Birmingham, now known as Samford University, where he played football with legendary Florida State University coach Bobby Bowden. After two years there, he took multiple jobs before being drafted into the United States Army, from which he was discharged slightly less than two years later. He then enrolled at Auburn University.

After graduating from Auburn, Scott became an insurance salesman, and the story that he retold hundreds (if not thousands) of times over the years recalled while on a sales call in Jackson, Mississippi, he came up with the idea for a nationwide tournament organization which would offer substantial purses and enforce honesty and integrity.

“It is my plan that we lift bass fishing up to public par with golf, bowling and pocket billiards,” he said. “It’s high time the public found out we exist.”

He used his well-honed sales skills to pitch his first event, the All-American Invitational Bass Tournament on Beaver Lake. That subsequently developed into the Bassmaster Classic, an event which now draws competitors and interests from across the country and around the globe. Later, Scott and tournament pros including John Powell and Roland Martin took a bus on a nationwide seminar tour to teach eager anglers better techniques.

His marketing savvy, combined with the direct mail expertise offered by Vice President Helen Sevier, led the organization to grow quickly and substantially. The B.A.S.S. empire now includes multiple publications, most notably Bassmaster Magazine, and multiple tiers of tournament competition stretching from the youth level up to the Elite Series. The organization’s long-running television show started out on The Nashville Network and is now broadcast on FOX. At boat ramps, tackle shops and even carpool lanes across the country, the blue and yellow B.A.S.S. sticker became ubiquitous.

In addition to his tournament endeavors, Scott also worked diligently to make B.A.S.S. a leader in conservation and environmental issues affecting fishermen and their “playing fields.” In 1972, he started the “Don’t Kill Your Catch” program, which led to technological advances aimed at keeping fish alive, and was a prime contributor to the catch-and-release ethos that persists today. Under his guidance, B.A.S.S. led attempts in both the legislative and the judicial arenas against water pollution. He also championed the Wallop-Breaux amendment to the Dingell-Johnson Act, imposing a small tax on fishing tackle to be used for fisheries management efforts. As a result of his efforts to promote boating safety – which included requirements that competitors wear personal floatation devices hooked to a “kill switch” -- President Jimmy Carter appointed Scott to the U.S. Coast Guard’s National Boating Safety Advisory Council.

Scott’s political activities were not limited exclusively to fishing issues. He embraced a role in national politics in 1980 as the Alabama chair of George H.W. Bush’s presidential campaign. In 1984, both Bush and Arkansas Governor Bill Clinton attended the weigh-in of the Bassmaster Classic in Pine Bluff, Ark. Later Bush told the New York Times that Bassmaster was his favorite reading material.

He occasionally found himself embroiled in controversy. When women asked to participate in his early tournaments, he prohibited them from entering, proclaiming that “It’ll be a cold day in hell before a woman ever fishes one of my tournaments,” citing the embarrassment that would ensue if they had to relieve themselves in front of a member of the opposite sex. Only a threat from the Corps of Engineers to cancel a tournament permit in 1991 led him to allow women to participate. He also used a racial slur in an interview with the Macon Telegraph newspaper, an act for which he later apologized.

Although Scott sold B.A.S.S. to his former employee Sevier and Jemison Investments of Birmingham in 1986, at the age of 52, he continued to be the company’s front man and master of ceremonies for over a decade longer, with his trademark Stetson hat and selection of fringed suede jackets making him instantly recognizable. He continued with the organization until 1998, when a contract dispute led him to leave. The organization was subsequently sold to ESPN in 2001. The television network later sold it to a group that included the late television personality Jerry McKinnis, former Time-Warner CEO Don Logan and former Deloitte CEO Jim Copeland. It was purchased by the Anderson Companies in 2017.

In addition to founding B.A.S.S., Scott started the Whitetail Institute, a commercial enterprise offering products developed through scientific research into quality deer management. After leaving B.A.S.S., he continued to work in the fishing industry, most notably as a consultant to individuals and communities looking to build trophy-class lakes. He also attempted to popularize carp fishing and championed light-tackle angling as the ultimate in the sport.

He never lost his activist streak or his commitment to maintaining bass fishing’s integrity as a true sport. When B.A.S.S., under ESPN’s umbrella, introduced World Championship Fishing (WCF), a competition combining angling with boat racing, Scott publicly reprimanded the organization he had founded. “I understand that bass fishing – even among the very best in the world – can be sort of dull to a TV producer and to those who are not fishermen themselves,” he said. “But we have devoted a major part of our energies over the past 30 years to the issue of boating safety. Unfortunately I see that changing now.” B.A.S.S. subsequently discontinued WCF.

In later years, he offered anglers the opportunity to fish and stay at his Ray Scott Trophy Bass Retreat, near Pintlala, Alabama. The property, also known as Legacy Lakes, was put up for sale in early 2016.

In 1981, Scott wrote a book entitled “Prospecting and Selling: From a Fishing Hole to a Pot of Gold.” Later, author Robert H. Boyle, who had profiled Scott for Sports Illustrated in 1969, wrote “Bass Boss: The Inspiring Story of Ray Scott and the Sportfishing Industry he Created.” Scott was also quite proud of his three-volume video series entitled “Ray Scott’s Guide to Creating Great Small Waters,” aimed at helping pond owners and lake managers to develop quality fisheries of their own. He appeared on television programs as diverse as the Today Show, the Dick Cavett Show and 20/20.

He authored a periodic column for BassFan for about a decade, submitting his final entry in 2011.

Scott was dedicated to Pintlala Baptist Church, and developed the Eagles of Angling program to fund the church’s expansion and operation.

Scott is survived by his wife Susan, his sons Ray Wilson III and Steve, and daughter Jennifer.