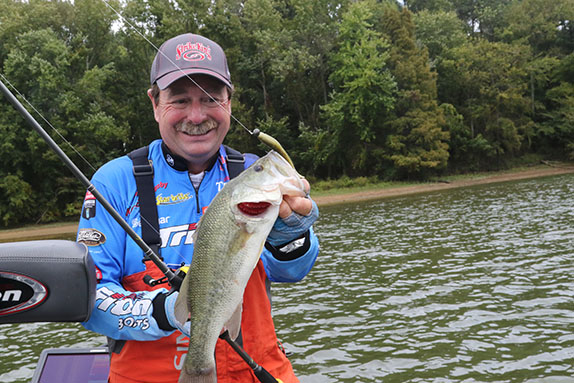 Let’s make this simple. Childhood, summer day, you hear the ice cream man’s unmistakable music. When he stops, kids rush the scene. Those who miss the moment probably run down the street screaming and waving until that truck full of frosty treats stops again.

Bait schools are the ice cream man. You and your childhood pals are the fish.

Sounds pretty simple, but consider that the ice cream man won’t waste gas on unproductive, unsafe or inefficient routes. Similarly, baitfish and the bass that chase them have their preferences and minding the key points is what turns those grinders into winders.

To this point, savvy anglers understand the need to dial in a search even before launching the boat. Lake map study is a good start, but consider the factors defining the habitat in which predator and prey exist.

> Cooling Down: With shortening days and progressing cold fronts, declining fall water temperatures trigger bait migrations and spur bass to bulk up for the approaching cold season. Precise ranges vary by region, but the chow-fest continues right up to winter’s onset.

Until this happens, we see bait schools and bass reacting to intermittent temperature changes. Length and severity of a cold front determines how much and how quickly water temperature fluctuates. Same goes for warming trends between fall fronts.

Simple physics tells us that stability increases with depth, so expect deeper movements during cool-downs and shallower expansion when warm-to-moderate days return.

Even in stable conditions, bait schools often vary their depth with sky conditions. Sunny conditions will find them holding tighter to the structure and usually rising in the water column, while cloudy skies mean a looser relation.

> The Right Neighborhood: Big balls of shad rolling down a creek channel are money; and electronics, schooling activity and hovering birds will show you where to cast. For the shallow habitat, proximity to deeper water is essential, as fish and bait appreciate the ability to fall back during cold snaps.

While steeper banks tend to favor bait and bass movement, MLF pro Russ Lane also likes channel-swing banks, bluffs, deeper docks and standing timber. The vertical structure with sun exposure will absorb and radiate heat, while each of these scenarios works like a water column elevator.

“When the water cools down, those fish have something to pull back to,” Lane said. “The vertical stuff is particularly important during cold fronts, as fish can move up and down to find the right depth.”

Fall drawdowns take a lot of shallow cover out of play, but that one big laydown with just its outer quarter in the water is always worth a look. Often a couple good ones will set up shop on such isolated ambush points, especially on a channel swing bank.

And always give that bridge causeway riprap a good look in the fall. During a past fall photo trip, I stepped onto a riprap stretch to shoot my anglers casting to the rocks. As I waited for them to position, I watched hundreds of threadfin and gizzard shad grazing down the rock line in 6 inches of water.

> Clarity Counts: We generally connect baitfish with clearer water – and you’ll rarely go wrong with this approach; but there’s another side to that coin. True, you don’t want muddy conditions, but Lane likes finding a littler dingier water in the back of a creek because the particulates gather heat and raise the water temperature.

“The bait may not be on the surface in the morning, but as the sun warms that dingy water, the bait will be up in the afternoon.”

> Blown-In Bait: Wind is your friend in the fall. Not only will it ignite reaction bites, it’ll position forage. Case in point, on the final day of the Toyota Bassmaster Texas Fest, winner Patrick Walters left his Lake Fork standing timber pattern and fished a shallow pocket where multiple days of wind exposure had stacked the bait around the stumpy interior. No surprise the bass were there in force. 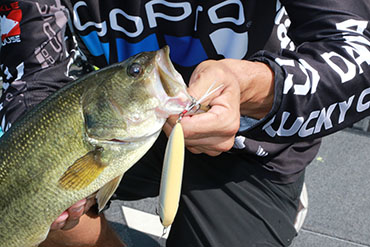 
Dressed hooks increase a bait's size and can also give it a more lifelike action.

Noting the fact that fall bass often zone in on a particular forage profile, Toledo Bend guide Darold Gleason said: “I pay closer attention to matching bait size in the fall than I do any other time of the year. Size is the deal. Find a bait that will match the size and reach the desired depth and you'll have magic.

“I do this with both crankbaits and topwaters. For example a large walking bait (6th Sense Dogma) for places with bigger shad and a smaller Dogma for smaller shad.”

Bait life cycle is one factor, but it’s also a function of the different shad species – the smaller threadfin and the larger gizzard shad. To this point, Kevin VanDam notes that, while a Strike King 6XD will mimic threadfins, he throws a Strike King 10XD to impersonate a gizzard shad.

Another way to alter the size of your presentation does not require retying – just add feathered trebles. Enhancing your walker, popper or jerkbait with “dressed” hooks not only increases length, but it bolsters the bait’s performance with lifelike display. The feathers contract and expend during movement to create an enticing appearance that may push a hesitant fish over the edge.

Never is the junk-fishing strategy more relevant than the fall season, so keep a variety of baitfish imitators handy. Lane’s lineup includes:

• BB Kicker on a 3/8- to 1/2-ounce Buckeye Lures Weedless J-Will swimbait head for shallow to mid-range habitat and fish suspending around bait.

• A 3/8-ounce Buckeye Lures spinnerbait with a shad color skirt and small Colorado and Indiana blades (silver, gold) and a 3-inch white Big Bite Baits Cane Thumper trailer. The blade combo moves a lot of water, but he can still get the bait down for a slow roll.

Also favoring spinnerbaits, Bassmaster Elite pro Mark Menendez mimics a shad frenzy by burning a Strike King Scorcher spinnerbait. Double willow-leaf blades and a narrow head with a flat spot on the bottom allow him to keep the bait high in the water column at high speed.

Lane warns against getting tunnel vision – remain aware of the forage alternatives. He’ll always start with the "silver baitfish" – threadfin, alewives, ciscos, etc. – but if he’s having trouble finding this forage, he’ll look for bream around shallow and/or vertical structure. Jigs, swimbaits and wacky/Neko rigs serve the purpose here.

If all else fails, Lane won’t hesitate to drag or crank around gravelly bottom for fish hunting late-fall crawfish. Bait’s the name of the game this time of year, but keep an open mind and you’ll keep the rods bent.