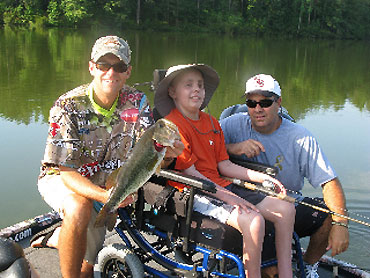 Edwards has launched several different initiatives since his bout with the disease, and now it's Meninger's turn. Meninger recently organized the inaugural Make A Fish kid's cancer survivor weekend.

Meninger approached Bill Jordan and Realtree – one of his sponsors – about hosting an unforgettable outdoor experience at Realtree Farms, and worked with Children's Healthcare of Atlanta (CHOA) to identify a deserving family to attend the special event.

"Being diagnosed and treated for cancer opened my eyes to how this terrible disease affects so many families across the world," Meninger said. "I was lucky to not have to endure chemo and radiation treatments. I'm very blessed and feel I now have a responsibility to do all I can to make a difference in the lives of people who are faced with much harder paths to recovery, even if only in small ways."

Meninger hooked up with CHOA's Camp Sunshine program, which allows kids in recovery and their families to experience the outdoor lifestyle in an effort to bring a little joy to their lives.

Bill Jordan and his family and staff welcomed 14-year-old cancer survivor Chip Madren and his mom and dad, Lea and Ken, to their 2,000-plus-acre hunting and fishing preserve in Columbus, Ga. June 25-26 for an outdoor experience of a lifetime. Chip, recovering from cancer treatments associated with a brain tumor that was removed in August of 2010, experienced meet-and-greets with Realtree Outdoors hosts David Blanton and Bill and Tyler Jordan, bass fishing on three private lakes, and food, games and family fun at the Realtree Farms lodge.

The Madren family – and their time together – revolves around outdoor recreation. Residing in the north Georgia suburb of Sandy Springs, they've always spent most of their free time either fishing or hunting prior to Chip's surprise diagnosis. Chip's favorite color is "camouflage" and he dreams of being a professional bass fisherman some day.

Chip's story is a heartfelt one that created a groundswell of community support on a local and national level, and can be read at his website ChipsNation.org. CBS National News recently covered the grassroots movement and impact of Chip's Nation.

Donations for Chip's Nation can be made at ChipsNation.org. Families interested in participating in future Make A Fish weekends can contact Meninger at jason@adventureadv.com.