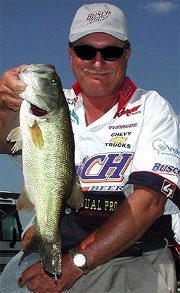 Denny Brauer doesn't like crawfish trailers with pinchers that stand straight up.

In virtually all situations, a jig fished without a trailer is naked. "I don't know which is more important than the other, the jig or the trailer," says Denny Brauer. "Really, a jig is incomplete without the trailer."

So how do you pick the right trailer? "It depends on what look you want to give a jig," he says, "whether you want it to look like a shad or a crawfish. Most of the time I want a crawdad-type shape and color."

"I think color is more important than action," he notes. "When you're flipping and pitching, the majority of strikes come on the fall, and action probably makes very little difference there. And when you're working a jig across the bottom, you're imparting the action. So I always want a trailer color to match the jig."

What color jig and trailer is determined by water clarity. "I use certain colors in clear, stained and muddy water," he says, and here they are (these are Strike King colors):

> Clear water -- "Chameleon craw is my favorite. That's a metalflake brown, but I like watermelons too. Natural colors."

> Muddy water -- "I like Texas craw, which is a black/chartreuse combination."

(He notes that "if you're swimming a jig, it's a different deal." At that point a trailer goes beyond just color. "Then the trailer becomes part of creating attention to the bait.")

So when Brauer sees the water color, his decision on jig and trailer color is "automatic." From there he decides what sizes of both to use.

"Use trailers of a size that match up with the size forage you're trying to emulate," he says. "But also consider the size of fish you're fishing for. If you're in a body of water with nothing but lots of little fish, downsize your jig and trailer. If you're like me and dream of catching only 5-pounders and above, stick with a bigger size -- though a lot of times you go home dreaming if you do that."

Size also depends on what fall he wants. The logic is obvious to any experienced angler: a slower fall means a lighter jig and/or bigger chunk (trailer), and vice versa.

But he's made a change in his philosophy about that. "When I used to want to slow a jig down, I'd use a bigger chunk," he says. "Now I do more with (jig) weight. I don't carry light jigs anymore," he adds. "The only sizes I have in my tackle box are 3/8-, 1/2- and 1-ounce unless it's a finesse situation. In that case I'll also use a special downsized trailer."

When it comes to line size, he says: "I don't worry so much about that."

It's no secret that Brauer only uses the jig he helped design: Strike King's Denny Brauer Pro Model Jig. What trailer does he prefer? One that isn't out on the market yet, a prototype chunk made out of the plastic used for Strike King's 3X ultra-durable lures. (Editor's note -- Strike King and Terminator are the only companies that use the Cyber-Flexx material.) But it's not exactly the same plastic.

"When Strike King came out with the 3X stuff, they had a crawdad which was fine, but you'd have to cut it down to use it," he says. "I asked them to design a specific trailer just for going onto a jig, rather than one that could be Texas-rigged or put on a jig, and that's what we've done.

"It's impregnated with salt, and that changes compound of 3X. It's not tacky, and it still has that durability so you don't have to replace it after every fish."

He notes that a happy accident also gave the new trailer a new action. "Cyber- Flexxx is very buoyant, and the way we originally designed (the trailer), the pinchers stood straight up. A lot of times when a crawfish is straight up in defensive mode like that, a bass won't attack it. When it drops those pinchers is when it gets inhaled.

"When we were putting salt in the 3X material, we found that (when fished) the pinchers would go backward and then gently come forward into a different position," he says. "And if you fish a jig the way I fish it -- which means you leave it there for 3 seconds -- the whole time the jig is sitting there, that trailer will be moving. It is so cool when you see it in the water.

"That will probably be the exclusive jig trailer I use, I like it that much." (Editor's note -- The as-yet-unnamed trailer should be on sale sometime this year.))

The bottom line is the same as anything in fishing: "You just need to find trailers you have confidence in," he says.

Two Ways to Rig It

Brauer suggests two different ways of rigging a trailer. "You can punch through the head like you would with a pork frog, or thread it on (the hook) through the head where it actually shortens the length of it."

Which technique you choose "really changes the action and even fall of the bait. It depends on what look you're trying to give it."

There's also a money and time consideration involved. "If you're using a plastic trailer and you're worried about losing trailers, you're better off threading it on," he says. "That will give you more hookups per piece of plastic. It can be a real annoying problem to put on a new piece of plastic after every strike.

"That's part of what's gotten me so excited about this new (3X) stuff," he adds. "The first day I tested it on Lake of the Ozarks I caught 17 fish on one jig with one trailer, and it still looked brand new. Normally you can't do that with a whole package."

If you're worried about missing strikes because of a trailer, and even if you're not, Brauer recommends threading on your trailer "so it doesn't rotate and get up there and ball up. You can also thread on a piece of plastic first and then slip the hook through the meat of the trailer."

The reason for that is that a balled-up wad of plastic "can hinder a hookset. You want to avoid any type of trailer ball-up between the hook point and the fish." 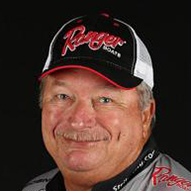