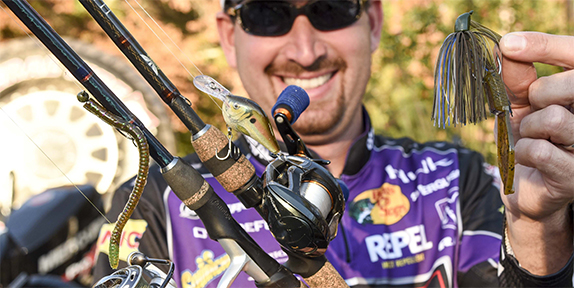 Ott DeFoe says his three most trusted lures will work in virtually any condition over the course of the year.

By Rob Newell
Special to BassFan

Ott Defoe has scored a Bassmaster Classic Berth every year since he started fishing the Bassmaster Elite Series in 2011. Previous to that, he qualified for the Forrest Wood Cup every year he fished the FLW Tour.

No matter what tour he fishes, no matter what lakes the circuits take him to, there is no denying Defoe’s consistency. He knows how to sniff out a bass, anywhere at anytime.

With that in mind, the question was posed to DeFoe: Which three lures are his most consistent fish producers no matter the season, location or condition? 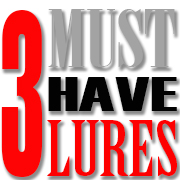 “It’s an interesting proposal,” Defoe said of having to narrow his options down to just three lures. “I already know, without a doubt, which three it would be. In fact, they are laying right there on the deck, where they stay.”

Defoe starts with a Rapala DT-6 crankbait, a shallow runner that is world-renowned at fooling fish from 2 to 7 feet of water.

“That’s my search bait, no doubt,” Defoe began. “From water temperatures in the 40s to the 80s, it’s the most versatile crankbait on the market. My go to line for the DT-6 is 12-pound test Bass Pro Shops XPS fluorocarbon.”

He adds that if he wants to fish the DT up around shallower cover in the 2- to 4-foot range like a squarebill, he will move to 14-pound line and if he is trying to get the bait down to 7 feet, he will drop down as light as 10-pound test. Defoe finds the DT’s unique action to be “perfectly moderate.”

“Its wiggle is wide enough for cold water, yet still tight enough for warm water,” he said. “That’s what makes the DT-6 such an incredibly versatile search bait. In cold water, you can imitate a crawdad in the red crawdad pattern. In the summer, you can use the live bluegill color or live pumpkin seed to target bass feeding on sunfish. And in the fall, it’s hard to beat live river shad. In fact, if I had to pick just one color for the DT-6 it would be live river shad.”

For his second option, DeFoe picked a popular lure.

“My second choice is a shaky-head – need I say more,” Defoe quipped about what is perhaps the best limit filler in all of bass fishing. “I’ve got one tied on at all times. There is not a situation where the shaky-head will not catch fish.

“I think it would even work ice fishing – I really do.”

Defoe’s best shaky-head rig is either a 1/8- or 3/16-ounce VMC Stand Up Shaky Head teamed with a Bass Pro Shops 6-1/2-inch Fin-Eke worm in green-pumpkin or sprayed grass colors.

“I’m going with a 6-1/2 inch worm because I can always bite it down to 4 or 5 inches to make it smaller for spotted bass or smallmouth if I need to,” Defoe reasoned. “And dying the tail with a little chartreuse usually helps the cause.”

“If I had to pick just one lure to fish with the rest of my life, it would be the good old jig,” Defoe declared. “It’s probably the simplest, most versatile and efficient single lure in existence.”

“I can tie that jig to 20-pound fluorocarbon and do so many things with it at just about any depth and in any cover,” he said. “Cast it, drag it, flip it, pitch it, swim it. Summer or winter; clear water or muddy water; largemouth, smallmouth or spotted bass. A ˝-ounce jig covers a lot of bases in bass fishing.”

Knowing Defoe is a topwater freak, I asked why a surface lure was not in his must-haves list.

“I do love topwaters, but the goal here is to achieve as much versatility as I can get out of three lures,” he said. “And I did not want to burn a choice with a topwater because, in my opinion, a topwater is too limiting. Most topwaters lose their effectiveness in water temperatures below about 52 degrees. But the three lures I picked are all in still in play below 52.

“Plus, I could bulge the jig on the surface when swimming it to emulate a topwater,” he added. “If the topwater bite is really that strong, they’ll come up and get that jig.” 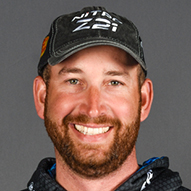