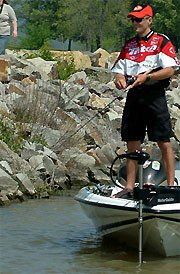 Randy Howell speed-reels in the Alabama version of the swimming jig technique.

Without a doubt, swimming a jig is one of the hottest techniques to emerge this season. In fact, it has accounted for so many quality fish and high finishes lately that we decided to devote another Pro Fishing Tips article to it.

The last article in this space detailed the jig-swimming prowess of Wisconsin's Tom Monsoor, who racked up two Top 5s doing it in the first four FLW Tour events this season. A swimming jig also helped Randy Howell claim the first Bassmaster Elite 50 victory last month on Arkansas' Lake Dardanelle. Both call it by the same name, but Howell works a swimming jig in entirely different fashion.

In a nutshell, Monsoor's is a finesse technique. But Howell's is more of a power-fishing one.

Monsoor works the entire water column, often dredging up fish from as deep as 30 feet, but also picking off plenty of shallow fish. In either case, it's a slow retrieve. But Howell swims his jig just below the surface – "real fast, erratic and hard" – and focuses mainly on shallow grass.

"It's almost like fishing a topwater," Howell said. "You make a really long cast and work it real fast. You work it almost like a Zara Spook, only 3 times as fast. They hit it hard, almost out of nowhere, and you can usually see the bite."

Howell targets the "thickest vertical grass" he can find, casting the jig shallow and working it back toward the boat. He keeps the rod tip between 10 and 11 o'clock, reels fast, and continually shakes and pops the jig with his wrist on the way back, especially when it snares in grass.

He said: "About 50 percent of my bites occur when the jig shakes free from grass. The other 50 percent occur just outside the grass, when those big ones follow it out and nail it.
(Working a jig like this) will wear you out hard. I've still got calluses on my hand from Dardanelle."

Unlike Monsoor, who relies heavily on his swimming jig in a variety of conditions, Howell only throws it on grass lakes, mainly in spring or fall, and usually in the morning or evening.

He said: "I'm going to give it a try on any lake that's got grass in it. I've never seen it work well in milfoil or hydrilla. I couldn't get it to work on Okeechobee. But any vertical, stalky grass will work. It's definitely a specialty technique, but in the right situation it's unbeatable."

Until this year, jig-swimming was a relatively obscure technique to most anglers, tour pros included. Many who knew of its effectiveness kept the cat in the bag. But the technique also means different things to different people.

Three of the Top 6 finishers at the Dardanelle E50 swam a jig during the tournament, but Howell said his "Coosa River" method made the difference in his win. "Other guys were swimming a jig, but I'm not sure they were doing it right. The real jig-swimming is (from) down here (Alabama), on the Coosa River lakes like Lay, Martin, Mitchell – that whole chain. That's where it started, back in the '80s. Some of the older guys kept it secret for a long time. Now it's a common thing around here, but you do still don't hear much about it anywhere else."

Howell, who moved to Alabama from North Carolina in 1996, said he learned the technique just 3 years ago. He said more tour pros are catching on to a swimming jig's effectiveness, but probably still aren't working it Coosa River-style.

"The main thing is having the right line," he said. "You can't work the jig right with monofilament or fluorocarbon. You've got to use braid. I learned that the hard way."

If thrown in thick grass, on a long cast, the jig takes 2 or 3 pulls to pop free with monofilament, he says, but one pull is all it takes with heavy braid. (He uses 50-pound Spiderwire Stealth, which is Teflon-coated and has the mono-equivalent diameter of 12-pound test.) Yanking on a snared jig only spooks fish, while a quick snap actually entices them, he noted. Plus, the lack of stretch helps keep the jig higher in the water column and deliver better hooksets. With mono, he said he'd either miss fish or have to go in after them to get them out.

A high-speed reel (he uses a 6.2:1 ratio Quantum Energy 860 XM) and a stiff rod (6' 10" heavy-action Quantum Tour Edition PT) are also crucial to the presentation. "You need a real smooth-casting reel because a long cast is key," he said. "You can use a longer rod (than he uses), but that length fits my size well and the way I fish. I've found that when I'm working a jig like this, line will wrap around a longer rod tip."

At the business end of the rig, Howell prefers a 3/8-ounce Lunker Lure Rattleback Jig with a 5/0 hook. His best overall color is black/blue with a solid black trailer, though the color he used at Dardanelle was white with silver Mylar strands in it. In general, if he thinks the fish are on crawfish, he goes with dark colors. If it's a shad bite, he goes with white or another light color.

Rather than a craw-shape trailer, or the single-tail grub on Monsoor's jig, he opts for the Berkley Gulp Swim Frog.

"Around here, guys have always used those bulk rubber frogs, the ones you can buy from a bucket in some tackle stores," he said. The Berkley Gulp frog "isn't out yet, but it may be in the next month or so. Jay Yelas and I always wanted (Berkley) to make a frog, and I really like this one. It's got two long legs with feet and toes on them. Those feet kick when you're working that jig quickly and create a lot of commotion. And the fish seem to hold on to it longer instead of blowing it out real quick."

So what do the fish think it is, a frog, a craw, a shad or what? He said: "I don't know. But when it's fluttering and popping out of the grass, rattling real loud, and those legs start kicking, they will absolutely smoke it." 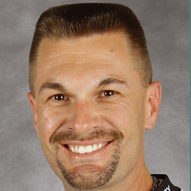