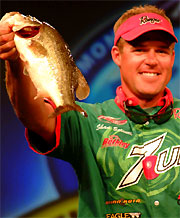 Shad Schenck gives the most value to the most recent information.

At this year's FLW Tour Championship, Indiana's Shad Schenck finished 5th. That's great for a part-time angler, who isn't rich – he works full-time as a salesman in the agricultural business, but would love to fish full-time – and doesn't purchase his fishing spots.

So he fishes the FLW Tour around his sales gig, and does well enough to land big-time sponsors like 7-UP and get within sniffing distance of a $500,000 payday. How? Focused preparation. Here's what he does to prepare for all tour events.

Step 1: Go Ahead of Time

"If I'm going to a new lake, the first thing I like to do besides the basics like getting a map is to go to the lake," he says. "If I've never been on a lake, I always like to go see it once before I get there (for a tournament). Usually it's a couple of weeks or a month beforehand."

He does that to "get familiar with the conditions and the environment. I want to see whether I'm going to be fishing grass, a bunch of wood, will there be a bunch of riprap to fish, that kind of thing. And also how much area there is to fish: lakes fluctuate so much that you might have been on that body of water, but not when it was that high or that low."

He thinks that 1- or 2-day initial trip – which he says is 90 percent looking and 10 percent fishing – "helps get you a mindset on what you're going to see when you get there." He likes to let that information stew in his brain while for a while.

He notes that if he's been to a lake before – like Lake Okeechobee, the perennial first FLW tour stop – he can skip this step. "If you've been to a lake several times, you know what to expect when you get there," he says.

Also, if he can't afford (for time or money reasons) to check out a lake on a one-off trip, he says he'll try to get a day on a lake between events. For example, when a tournament finishes he will sometimes run to the next lake on the tour schedule and scout it for a day before driving the rest of the way home.

Schenck likes to break down practice into 5 days, the first two of which are the second step in his practice routine.

On those days he spends about 70 percent of the time fishing, and about 30 percent looking. "I'm trying to become in tune with what's going on with that specific body of water," he says. "I want to come up with some areas and check a lot of different stuff out.

For the last 3 days of practice immediately before a tournament, he focuses down to find the area where he'll start the tournament. On the first of the 3 days, he fishes one area hard. On the second day he fishes another, and on the final practice day he fishes whichever of those is better.

On that day, "make sure you know that place inside and out," he says. If he's found fish solidly in his best spot, he'll spend most of day 3 looking for fish near there. "If ever on Tuesday (or the day before a tournament) you can find a better patch of fish or a better pattern close to where you were fishing before, that's when you know you'll do good in a tournament," he says. "That's what I try to hunt for."

He adds: "Keep the rule in mind that the later you can catch fish and get good information (out on the lake), the better. If the tournament starts on a Wednesday and you're catching fish on Tuesday afternoon, that's the ticket right there.

"I think a lot of people have trouble sorting that information out. I really try to go in hard on those 3 days. That's when the information you get is most important."

He says keeping it simple is a key factor in getting good information. "In the world of bass fishing, things have become so complicated that they can be overwhelming. So you really have to make things simple. Tournaments can be won in a lot of different areas of a lake. It's not like they can be won only in one spot. There are opportunities to win each tournament in about 10 different places."

> Even if he's been to a lake before, he will still practice for 5 days. "My ideal situation is to get 5 days on the water because that gives you a window for something bad to happen – you can deal with any breakdowns, really poor weather that makes it hard to search, or whatever."

> He's spent 4 years fishing the FLW Tour (he qualified via the Eastern EverStarts) and has "pretty much" been using this prep scheme since his first FLW season. "I vary from the rules, but that's my standard plan on how do it," he says. "And when I've done well, I've pretty much stayed with that plan. It works." 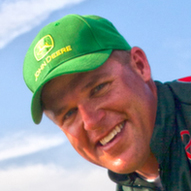