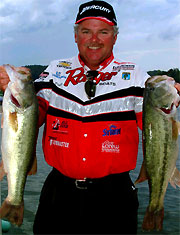 In some situations in fall, Tommy Biffle fishes a white jig instead of a spinnerbait.

It's no secret that Tommy Biffle will fish a jig whenever he can. But fall isn't the greatest time to do that -- or is it? Here's one of his secret ways for catching bass on a jig in the fall, and at other times of the year too.

"When the water is up in the bushes or in cover, I'll flip a white jig with a silver Salt Craw behind it," he says. "I fish it in places you'd fish a spinnerbait, but they're places where the fish are feeding on shad but you can't throw a spinnerbait in there real well."

He hit upon the white-silver combination "back when the white jig got popular. I've had the silver crawdad for years and years, and it's always a good bait because it resembles a shad. I got to putting the two together, and it became my go-to bait in heavy cover because it was easier (to fish) than it was to put a spinnerbait in there."

He notes that fall bass "key in on shad, not crawdads," and that baitfish, bass and his white jig "swim through branches and trees and get into places a spinnerbait can't."

When, Where and How

Water temperature isn't critical for this technique, Biffle says. "They will bite it year-round other than when it's real cold. Anytime bass are feeding on shad in real heavy cover, it's a good technique to use."

Water color also doesn't matter much. But he'd "rather have it stained or a little dirty because the fish can't see you as well and they're not as spooky."

He looks for bass feeding on shad on windy points, in the backs of coves or in pockets -- "basically where the fish are patterned, whatever situation it is."

When you find a good spot, flip or pitch the jig and swim it back. "You're pitching it in (the cover) -- right in the middle of it or back in it where the water's up enough," he said. "The fish are sitting outside of it or in front of it, waiting for the shad to blow in.

"Just move it through the branches, and swim it like a baitfish going through there. Keep it up off the bottom.

"You're just swimming it," he says. "You're lifting your rod tip up with a rhythm as you're reeling -- you're getting that swimming motion to it. Don't go real fast. Just do it fast enough to keep the depth you want it to swim."

He says that "it's like fishing a spinnerbait a foot under the water," but notes that the swimming motion is "not just reeling in like you would with a spinnerbait."

Strikes are "usually pretty good. It's a lot harder strike than a subtle jig bite. They usually grab it and go, like a spinnerbait coming by. They hit it pretty good."

> Swimming white jigs also works in fall around floating boat docks. "The fish will lay right up there, and you just swim it right below the edge of the styrofoam," Biffle says. "You won't get as many bites (as when fishing it in and around wood), but if you make it dip up and down, you'll get a reaction strike."

> It also works in river systems or creeks, "but you have to have some kind of cover to fish it around."

> On the silver color, which he designed: "I've used it for years. It's not a big-seller because people think, Why do I want a silver crawdad instead of natural or black and blue? But if I could just have one color, that would be it. That's how many fish I catch on it." He also fishes the silver Salt Craw solo, with a 5/16-ounce worm weight and 5/0 Owner hook. 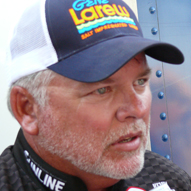