BACK
10 Florida Pros In Field 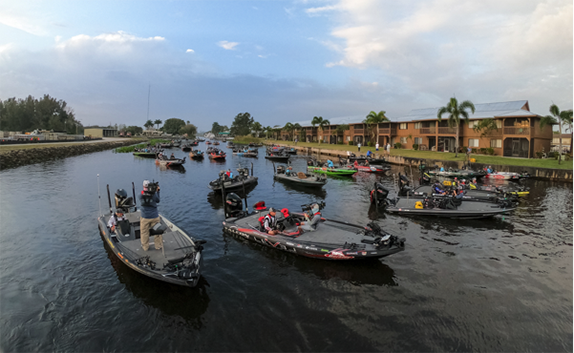 A field of 150 anglers will compete for a top prize of up to $115,000 in the MLF Invitational at Lake Okeechobee.

The inaugural MLF Invitational is set to get under way today at Lake Okeechobee in Clewiston, Fla. The series replaces the Pro Circuit and features a roster of 150 anglers competing for a top prize of up to $115,000 and an invitation to compete at REDCREST V – the Bass Pro Tour championship – for the chance to win up to $300,000.

The tournament marks the first of six Invitational events in 2023, offering competitors a total season purse of more than $3.9 million. The field is also competing for points in the Angler of the Year (AOY) race. The Top 8 pros in the AOY standings at the end of the season will receive an invitation to compete on the Bass Pro Tour.

Over the past 29 years, MLF has held 161 tournaments on Lake Okeechobee – affectionately referred to as the “Big O” – making it the second-most popular fishery visited by organization. Only MLF’s home waters of Kentucky and Barkley Lakes has held more MLF stops, with 203 tournaments held there over the years.

The field of anglers includes local favorite Jared McMillan of Clewiston, Florida, and nine other Florida pros, including Shaw Grigsby of Gainesville and Val Osinski of Fort Lauderdale, who has three career victories on Lake Okeechobee in MLF competition. They will be joined by 140 additional pros – 13 of which compete on the MLF Bass Pro Tour, including back-to-back Bass Pro Tour AOY winner Jacob Wheeler of Harrison, Tennessee and 2022 Pro Circuit AOY Michael Neal of Dayton, Tennessee.

In MLF Invitational competition, the full field of 150 anglers compete in the two-day opening round on Wednesday and Thursday in a traditional five-fish, weigh-in format. Only the top 50 pros based on their two-day cumulative weight will advance to the final round on Friday, where they will compete for the grand prize of up to $115,000, including the $35,000 Phoenix MLF Bonus for qualified anglers. The winner will be determined by the heaviest three-day cumulative weight and will receive an invitation to compete at REDCREST V in 2024.

In addition, the season-long Invitational AOY will also earn a berth into REDCREST V.

McMillan said this will be the third time he’s started a season on his home lake, and although he feels pressure and expectation to do well, there’s nowhere else he’d rather kick off the 2023 season.

“I was really excited to see that we were starting on Lake Okeechobee when the 2023 schedule was released, but after a significant hurricane season and heavy flooding, it’s fishing a little sub-par at the moment,” said McMillan. “It was about 2-foot above regular pool a month ago before it went off-limits, but it’s dropped about six inches within the past month, so hopefully it will continue dropping and will be back up to speed by the time the event starts. A lot can change in a month in Florida, so I’m excited to get out there and see what we’re working with.”

He said there’s plenty of good, submerged grass on the lake, but anglers will have to contend with a lot of muddy water.

“Guys are pretty much going to find the fish in 2 to 4 feet of water everywhere around the lake – it’s just going to be a matter of finding good, clean grass and good, clean water, along with mixed vegetation and a little bit of bait,” said McMillan. “There will be a couple of popular areas with tons of boats in them, but the anglers who can find something outside of those main areas should do really well.”

The Clewiston pro said he expects to see standard Okeechobee baits in play during the event. Z-Man ChatterBaits, Zoom Speed Worms, Yamamoto Senkos and topwater baits will be key, although once the fish are found, McMillan said guys should be able to catch them on anything they want. The key, he said, will be to locate good areas.

“It looks like some big bags have been caught in local tournaments over the past week or so, so I think the fishery might be turning back around and looking a lot better than it was when we went off limits,” said McMillan. “We’ve seen 25-pound bags win in those recent events, which is really good.

“I think we’re going to see some of those good bags,” he continued. “I don’t think we’ll see them three days in a row, but I think you’ll see one or two big bags each day from different people, and an angler who can be consistent all three days will probably end up winning the event.”

McMillan said he believes it will take an average of 19 to 21 pounds per day to finish the event in first.

“I do think someone will have to catch a big bag at least one of the days to take home the big check,” said McMillan. “But I don’t think you’ll see one guy stay at 21 pounds a day for three days – that’s just hard to do in Florida.”

Anglers will take off at 7 a.m. ET each from Roland & Mary Ann Martin’s Marina & Resort, located at 920 W. Del Monte Ave. in Clewiston. Weigh-ins will also be held at the marina daily beginning at 2:50 p.m. Fans are welcome to attend the event or follow the live on-the-water action all three days of competition online on MLF NOW! beginning at 7:30 a.m. ET at MajorLeagueFishing.com.