Wheeler Had Lots Of Options Despite Huge Field 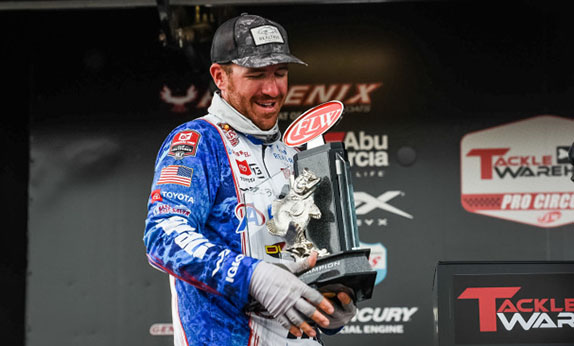 With 204 boats in the field, crowding was bound to be an issue at the Lake Chickamauga FLW Pro Circuit Super Tournament. It was, but Jacob Wheeler managed it quite nicely.

The No. 1 angler in the BassFan World Rankings, who now makes his home in Harrison, Tenn. near the shores of Chickamauga, had plenty of productive places to fish. So many, in fact, that he didn't even visit a lot of him during his four competition days.

Bass Pro Tour anglers were given the option of competing alongside the Pro Circuit regulars for the final three tournaments of this pandemic-shortened season and Wheeler's return to the organization with which he launched his career was indeed triumphant. Only a monstrous day-2 bag caught by Jason Reyes prevented him from leading wire to wire and his final total of 93-12 outdistanced runner-up Cole Floyd by nearly 12 pounds.

"I'd say the biggest thing for me was just having enough places that weren't getting pressure," he said. "I really think it helped a lot that I had a long day (as part of the last flight) on day 1 because I caught 20 pounds pretty early and that allowed me to go around and figure out what was good and what wasn't. On the (Tennessee Valley Authority) lakes, a lot of times the fish show up on certain places and times that you're not going to get to fish in the tournament.

"Knowledge of where the big fish like to hang out was another big deal, and also keeping an open mind – I wasn't locked in to any one thing. One place I'd caught maybe one 3-pounder off of since I've known about it and I weighed five fish from it in this tournament. It turned out to be one of my best places."

Wheeler said he puts in about 60 days each year on Chickamauga and a lot of that time is spent staring at his electronics units.

"Every day I go out I'm always graphing," he said. "I never stop looking. It starts with the mentality of trying to find it all.

"I spent one day (during pre-practice) just decluttering some waypoints – brush piles and other old stuff that's now gone. I looked at parts of the lake I don't usually fish, ruling things out."

By the time competition got under way, he had about 60 groups of fish pinned down. Some locales held just five to 10 fish while others were harboring 100 or more.

"Each place was completely different. The main thing I was looking for was places that not everybody was going to find. They were spread around from Soddy Creek down to the dam. 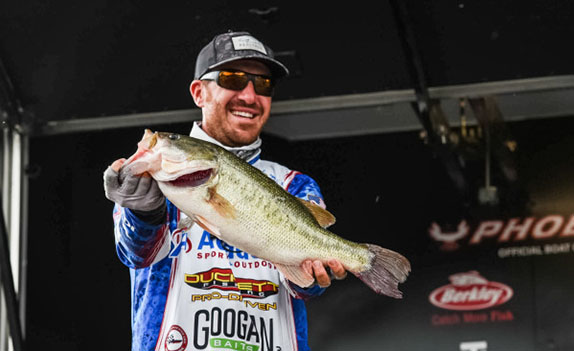 
Wheeler got some oversized bites en route to compiling a 93-12 total over for days.

"I had some shallow stuff that I'd caught some fish on, so I wasn't positive how I was going to play this one. I didn't want to force anything and on day 1 I caught a couple good ones shallow in the grass, some other competitors were fishing the same stuff I caught them on.

His focus was primarily offshore the rest of the way. Deep-diving crankbaits produced the majority of his best specimens for the drop-offs, with a hair jig, a worm and a scrounger-type bait also contributing. His rotation consisted of about three dozen places that included brush, hard bottoms and transition areas.

It turned out that he didn't need the big one that bit late on the final day, but it did a lot for his psyche at the time.

"I figured Reyes (who began the day in 2nd place, almost 5 pounds back) was going to catch 20 pounds, so if I caught 17 I should be okay. I was stressing a little bit when I was at 16, but then it all came together. I ran in 15 minutes early just in case something happened (mechanically)."

> Wheeler said the long rod facilitated extremely long casts that allowed him to get the DT 20 down to 20 or 22 feet and the reel, with a higher gear ratio than many anglers use from cranking, allowed him to retrieve the baits at a rapid rate. "I was really launching it and burning it through the school because that was the only way to make them bite. I learned that at Pickwick (where he won an FLW Series event in late May)."

> He threw his worm on the same rod (heavy-action), reel and line as the hair jig. It was an unnamed 8-inch bait in green-pumpkin." 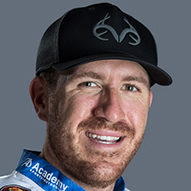