Expect Ledges To Shine At Eufaula 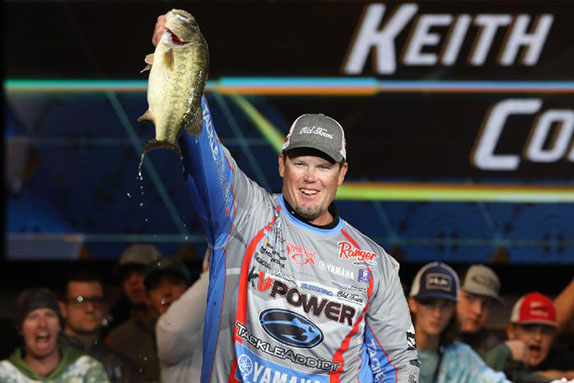 Keith Combs is hoping the calmer conditions for the tournament will bode well for his plans to fish offshore at Lake Eufaula.

Keith Combs says it felt a little odd leaving his house in Texas a few days ago and pointing his truck east toward the Alabama-Georgia border. As much as he’s been looking forward to the resumption of the Bassmaster Elite Series season, the idea that it was actually upon him felt somewhat foreign.

“It felt weird leaving the house and doing things to get ready and it felt weird rolling into town and getting in the (rental) house,” Combs said. “When my alarm went off (Sunday) morning, it felt like we were 100 percent back to normal. I was like, ‘Woo, let’s go.’”

It’ll have been 122 days since the final day of the Elite Series season opener at the St. Johns River when the first casts fly on day 1 at Lake Eufaula on Wednesday. For those who competed in the Bassmaster Classic, it’ll bring an end to a 94-day hiatus brought about by the coronavirus pandemic.

Most in the field tried to stay sharp during the long interruption either by fun fishing or competing in small tournaments near their homes. And now BassFans will get a feel for how quickly the anglers can get acclimated after missing essentially an entire seasonal phase on the fishing calendar.

It’s nearing mid-June and the post-spawn transition at Eufaula is long over. Temperatures are expected to be in the mid to high 80s all week – water temps are in the low 80s – and the Chattahoochee River ledges up and down Eufaula should see plenty of traffic this week.

Pro anglers are known to scour all corners of the Internet for publicly available updates on the upcoming venue. Elite Series anglers didn’t have to look all that hard or for all that long to find fresh intel on Eufaula considering the FLW Series Southeastern Division had its season opener there last weekend. In addition, a local team tournament was held Sunday and it took 27-plus pounds to win and 25-plus to take second.

While some top-10 finishers at the FLW Series yanked some of their weight out of shallow water, the majority was amassed out deep, either on or along the ledges or in the standing timber out in deeper water.

With Yusuke Miyazaki unable to travel back to the United States from his native Japan, the field this week will be 87 anglers as the season gets cranked back up. If all goes as planned, the Elite Series will hold its final eight tournaments over the next 151 days.

“I’ve got nothing on my agenda other than tournaments,” Combs said.

> Lake Name: Lake Eufaula
> Type of Water: Chattahoochee River impoundment
> Surface Acres (full pool): 46,000
> Primary structure/cover: Humps, ledges, rock piles, timber, milfoil, pads
> Primary forage: Threadfin shad, gizzard shad, bream
> Average depth: 15 to 18 feet
> Species: Largemouth, spotted bass
> Reputation: Has had its ups and downs. Once hailed as a big bass destination, it has gone through a few lulls, but seems to be recapturing some its old glory of late.
> Weather: Aside from a thunderstorm in the forecast for day 1, the field should be treated to plenty of sunshine and light winds
> Water temp: Low 80s
> Water visibility/color: Normal
> Water level: A couple feet above normal
> Fish in: 3 to 35 feet
> Fish phase: Post-spawn and summer
> Primary patterns: Crankbaits, swimbaits, hair jigs, Carolina rigs, topwaters, frogs, flipping, spinnerbaits
> Winning weight (4 days): 83 pounds
> Cut weight (Top 10 after 3 days): 48 pounds
> Check weight (Top 35 after 2 days): 29 pounds
> Fishing quality (1=poor, 5=great): 4 for Eufaula
> Biggest factors: When the ledge bite slows, having a plan B
> Biggest decision: Whether to commit to fishing offshore or mixing in shallow water at times
> Wild card: Eufaula has an ample population of big fish, so one or more of those per day can go a long way

For a closer look at Eufaula, check out the contour map below provided by the folks at Navionics:

The first two days of practice posed some challenges. The longer days allowed anglers to be on the lake for nearly 15 hours. Sunday was overcast and rainy while Monday brought a stiff wind out of the south. That made it difficult to get dialed in, especially for those committed to utilizing their electronics to discern and decipher what’s what on the ledges.

For Chad Pipkens, Eufaula represents a chance to dial things in on the fly. He’s only been to the lake for media junkets before so he feels like he’s starting from scratch.

“I’ve never seen so many ledges,” Pipkens said. “When you don’t have any experience on the lake ledge-fishing and you have no clue where anything goes down … there are so many bars and so many of them look great, but you can fish for eight hours and not get a bite.”

Over the first two days of practice, Pipkens learned how easy it is to ease over what could be a spot with potential. 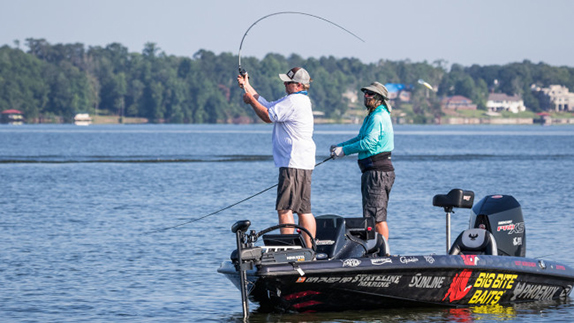 
While Scott Montgomery (left) focused mainly on Eufaula's ledges during the recent FLW Series event, he thinks the bank could produce some decent stringers this week.

“They’re easy to miss and the hard part is you don’t want to get caught in one area because I don’t know what’s typically good,” he said. “You could be a on two-mile stretch and it could be bad, but then run up the lake and get on a five-mile stretch and find some. You can miss them really quick. On Monday, I followed my trail from Sunday and moved 60 or 70 yards to the left and found a whole wad of them. That tells me being just a little off here can make a big difference.”

Pipkens noted that when he marked fish they seemed willing to bite, but those schools aren’t just everywhere. His lack of experience at the lake may also prompt him to try to catch a decent limit shallow before he commits to the offshore game.

“To do real well, I think I might need to catch a few early and get a good start, and then go looking for new stuff in the second half of the day,” he added. “I want to get started, so it’d be nice to catch a decent bag and then look because it’s hard to go looking when you’re getting your butt kicked.”

Bank Could Be Productive

In his day job, Scott Montgomery is the vice president of Big Bite Baits, based in Eufaula, Ala. In his spare time, he’s one of the top local tournament anglers on the lake and is coming off a 7th-place finish in the FLW Series event.

He says his misstep came on day 3, when he didn’t make the right adjustment when the ledge bite started to wane.

“I was trying to catch fish that were way too pressured,” he said. “Maybe I should’ve gone to a new area and tried to survive that way.”

Montgomery thinks committing to the bank could be an effective way to survive in the Elite Series.

“From the amount of pressure the lake had before they got here, I think the guys who spend time on the bank and are able to catch 10 to 15 pounds that way and then look for schools during the tournament could do well,” he said. “They’re on the ledges and on the bank. We’ve had mayfly hatches and the bream are bedding with the full moon. The bass are spread out. There were 100-fish schools prior to the FLW Series and I’m not sure if they’ll gang back up. Somebody will do well on the bank and possibly win.”

While Eufaula’s water level doesn’t fluctuate a whole lot, Montgomery pointed out that a slight rise over the past seven to 10 days has affected where the bass are setting up.

“Before our tournament, the lake was at 187,” he said. “As our tournament progressed, it got up to 188.5. Now, it’s almost two feet high. When it was down, everything was out to the ledges. Now that it’s crept up it has spread the fish out.”

A Few to Watch

> Chris Zaldain – While the sting of an 80th-place finish at the St. Johns has probably worn off, expect him to bear down this week and trigger some big bites.

> Clifford Pirch – He’s versatile enough and experienced enough to know when to pull the plug on the deep fish and transition to another strategy.

> Steve Kennedy – Has plenty of experience on Chattahoochee reservoirs and a slow-retrieve swimbait might be an effective tool this week. Just sayin’.

> David Mullins – Next to sitting in a duck blind, nothing makes Mullins happier than heading into a tournament where a deep crankbait bite is on the menu.