Angler Who Competed At Pickwick Tests Positive For COVID-19 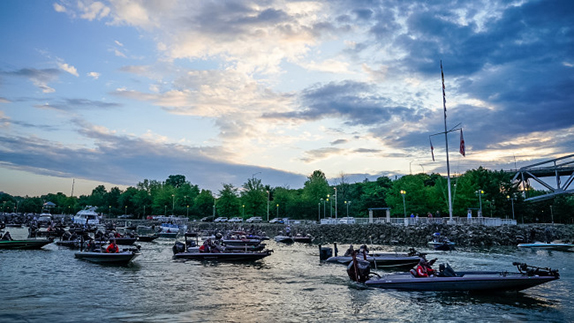 An angler who competed at the Pickwick Lake Central FLW Series last week has tested positive for COVID-19.

FLW informed anglers who competed in the event of the news via email Wednesday night and the organization is folllowing contact tracing protocol to identify who the angler may have come in contact with during his involvement in the tournament and stay in the host community of Florence, Ala. The angler’s identity was not revealed, but the email described his participation occurring on May 28-29, indicating he was not among the 10 finalists on either the pro or co-angler side. A total of 302 anglers participated in the tournament.

The email message indicated the angler “suffered minor, allergy-like symptoms, which prompted a doctor’s visit where a COVID-19 test was administered. The angler promptly reported a positive result to FLW’s management team.”

Kathy Fennel, FLW’s president of operations, and Bill Taylor, FLW’s senior director of operations, both attended the Pickwick event. Fennel is not among those slated for self-isolation and is headed to Eufaula on Thursday morning while Taylor is unlikely to attend due to a prior commitment. There were no indications that the Eufaula tournament would be canceled or postponed.

“With the guidelines that are in place, this just underscores their importance,” Joe Opager, FLW's director of public relations, told BassFan Wednesday night. “And that’s why we are comfortable proceeding with the Eufaula tournament.”

News of the positive test overshadowed what was viewed as a largely successful return to competition for the largest fishing tournament organization in the country. During the 2 1/2-month hiatus triggered by the coronavirus pandemic, FLW officials formulated a set of recommendations and protocols for anglers and staff and Pickwick gave them a first chance to see them deployed under real tournament conditions.

The Major League Fishing Bass Pro Tour resumes competition Sunday at the Kissimmee Chain of Lakes in Florida and the Bassmaster Elite Series will follow the FLW Series at Eufaula beginning next Wednesday. It is expected both of those tournaments will also implement COVID-19 related changes to their operational plans.

Prior to the Pickwick tournament, FLW distributed a Safe Tournament Guidelines document to anglers. The 16 bullet points provided an outline of how FLW planned to alter its usual tournament operations to provide a safe environment and comply with physical distancing guidelines. Among the changes were transitioning away from an in-person pre-tournament briefing where all competitors and staff gather together to discuss rules and other procedures. Instead, McWha conducted the meeting online via Zoom.

Also, anglers were asked to wear a face covering at takeoff and weigh-in and while seated in the boat. While on stage during weigh-in, anglers were also asked to stand on an X marked on the stage to maintain a safe distance from McWha, who handled emcee duties. FLW staff wore masks while some wore face shields while working in areas where they had direct interaction with anglers.

The document also listed the common coronavirus symptoms and requested any angler who experienced any of them in the previous 14 days to not participate in the event.

In hindsight, McWha was very pleased with how the return to competition went. McWha said he’d received a “lot of positive feedback” from anglers with the additional competition flights, the elimination of the bag line and standing at the tubs prior to going on stage ranking as the most popular moves.

“The anglers did a super job and so did our staff,” McWha said. “The folks at our home office worked long and hard to get these guidelines worked up.”

Normally, a field of 151 boats would be split up into five or seven flights. At Pickwick, two more flights were added, which reduced the number of boats (and people) coming to check in at once. When anglers got to the dock, they retrieved a weigh-in bag from a homemade stand constructed out of conduit pipe. Each bag was sanitized in between uses by FLW staff.

Gloves were made available to anglers if they wanted them and McWha said he never saw more than 10 anglers in line to come on stage.

At McFarland Park, where the weigh-in occurred, McWha said FLW encircled the entire tournament operations footprint with red tape on the pavement and made sure that FLW staff were the only people moving around inside that area. McWha said he was not aware if any local health officials were present to observe the event.

At Eufaula, McWha said the plan was to mimic the setup from Pickwick, with some small changes to account for the different facility layout. Despite a smaller field, he still expected to utilize additional flights to minimize any bottle-necking situations.

One of the changes McWha said he’ll focus on being more diligent in the future is how he and anglers are positioned while on stage. At Pickwick, a X was marked on the stage floor indicating where anglers should stand after placing their weigh-in bag in the tub on the scale. There was an also an X in the area McWha was standing, but there were frequent occurrences where the angler didn’t retreat to the X.

“We are all creatures of habit with this,” McWha said. “We get in a routine and are used to doing things a certain way. I need to do better on that and remind them to step back as they come on stage. That’s one area I need to be better in.”

From an angler’s perspective, not having to physically attend the pre-tournament briefing was a welcome change and one some hope becomes permanent.

“That was really kind of nice,” said Buddy Gross, who finished 2nd in the tournament. “You could hear everything, and we didn’t have to sit close together. It was nice to not have to go. I’d love to see that stay in place. That way you can attend and still work on tackle.”

Gross also preferred how the additional flights spread out the check-in times.

“That was exceptional,” he said. “We didn’t have to stand in line forever. It was one person per tank. Everything was run exceptionally well.”

Justin Atkins, who finished 7th, was a fan of the new flight schedule, especially as it relates to fish care.

“In the summertime, the less time a fish spends in the bag, the better,” he said. “We had a great live-release rate there, so that’s a positive all around.

“I had no issues with the way anything was run. I thought it was plenty fine. Mark did what they had to do to stay safe and gave us guidelines to stay safe.”

Gross said he and his co-anglers kept their distance from one another the best they could while still remaining comfortable.

“I’d be lying, though, if I told you if I heard a cough in the back of the boat I turned to see if I was down wind or not,” he said. “At the same time it was business as usual.”

During practice, Gross said he shared a house with one other competitor and twice ate out at restaurants. He then moved to a hotel for the tournament days and was impressed with the additional effort put forth by the cleaning staff.

“We carry four cans of Lysol with us so we went in and cleaned it ourselves, but the hotel did an exceptional job of making sure everything was good,” he said, noting the television remote was sealed in a Zip-Loc bag to indicate it had been sanitized.