BACK
Lots Of Nighttime Fishing

Cherry's Reign Has Been Extremely Quiet So Far 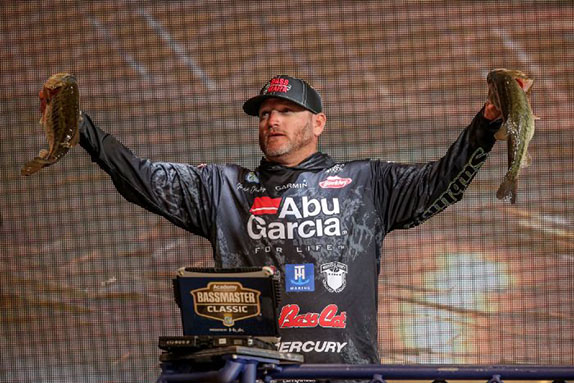 Angler of the Year points won't be on Hank Cherry's mind when the Bassmaster Elite Series schedule resumes next month.

Hank Cherry has been doing a fair amount of fishing as he awaits the resumption of the coronavirus-delayed Bassmaster Elite Series schedule next month. He's done a lot of it, though, outside of what would be considered traditional tournament hours.

"I've been fishing a lot at night with big wakebaits to take advantage of the shad spawn," he said. "I haven't gotten any giants, but I've caught several 5- to 5 1/2-pounders.

"I've introduced it to some people who've never seen what happens during the shad spawn. It starts to get good at 9 or 10 o'clock at night, but the best time is usually 1 a.m. to daybreak. You're listening when you're fishing the points – sometimes it sounds like somebody's throwing rip-rap into the water (as larger species converge on the baitfish)."

The phenomenon can occur at any shallow, rocky place and also on boat ramps. He said the key is to keep your bait as close to the rocks as you can and for as long as possible.

"The biggest fish I've caught doing it was a 35-pound blue (catfish)," he said. "That one sounded like somebody dropped a car in the lake."

Cherry's reign as Bassmaster Classic champion has been unique to this point. Within a couple weeks after he received the trophy in Birmingham, Ala. for his three-day performance on Lake Guntersville, the sport – along with most of the country – shut down due to the COVID-19 pandemic.

Immediate family and a few other people notwithstanding, the 46-year-old North Carolinian has been unable to celebrate the victory with anyone. Not at tournaments, at outdoor shows, at seminars or anywhere else.

"It's kind of one of those things where I've still got the chills and the feeling of excitement from winning, but I haven't been able to go out on the road and share it with people and enjoy it," he said. "Everything's just been on pause. It's been like a super-long rain delay at a baseball game.

"On the other hand, I have enjoyed the time at home with family. We've been able to do some fishing at the coast, which is something I never get to do at this time of year. It's been mostly flounder and redfishing, but my son caught a 40-pound jack crevalle that was in 4 feet of water in a creek. It took four of us 40 minutes to get it in, and that only happened because it couldn't go down (in the shallow water). If it'd been in open water, it would've spooled us."

Son Christian, 10, has missed an entire spring of organized baseball. His father, a former collegiate player, helps coach his team when he's available.

"We were supposed to get started with that the week of June 13, which is right after we'd get back from the tournament at Eufaula, but our governor extended Phase 2 (of the state's reopening). We can't play baseball, but they've opened the swimming pools up. He likes it well enough, though, where we've still been working on hitting and throwing on our own.

"As soon as it opens he's going to play into the fall, and then he'll play fall baseball. The toughest thing right now is that he's 10, but when he moves up to 11 the mound goes back and the bases get a little farther away."

Time to Get Ready

Cherry will do more regular bass fishing as the Eufaula event gets closer on the calendar. He'll make one more visit to the coast next week, where Christian is spending time with grandparents, then either head to Falls Lake or Jordan Lake for a couple of days, as they fish similarly to Eufaula.

"I need to get away and fish somewhere besides Lake Norman and get back in the swing of seeing fish on my depthfinder out deep," he said. "I expect Eufaula to be a good event fishing shallow all the way out to deep."

With his spot in the 2021 Classic already secured by his triumph at Guntersville, he'll pay far less heed to the Angler of the Year (AOY) standings than he normally would.

"I'll be going at things without the points in mind," he said. "If there's something that I think is the way to win, I'm going to run it.

"This (shutdown) has been tough on a lot of guys, and like everybody else I'm ready to get back to doing what we do and get back to a little normalcy. Let's get this thing rolling!" 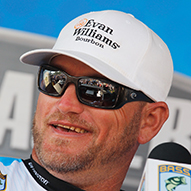