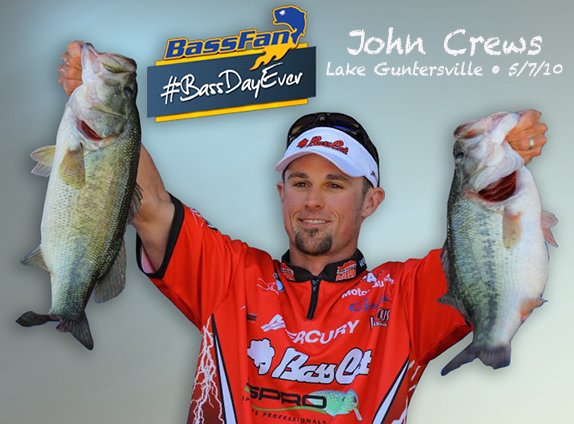 John Crews said everything lined up just right for him on day 2 of the Lake Guntersville Elite Series in May 2010.

In continuing the new BassFan Up Close feature launched earlier this month, we are happy to bring you the third episode in our #BassDayEver series, in which pro anglers delve into the details surrounding the single-most significant day of their tournament careers.

Today, John Crews joins BassFan Editor Todd Ceisner to discuss why day 2 of the 2010 Lake Guntersville Elite Series – May 7, 2010 – holds more significance than other day in his career. The day had a little of everything – nearly 25 pounds in the livewell, more than 120 fish caught and a lost big fish that brought him to his knees.

To that end, we want to hear about your #BassDayEver on the water. Where were you? Who were you with? What did you catch? Why was it memorable? Drop us a note in our Feedback section or visit us on Facebook, Instagram or Twitter.