What Pros Are Catching Them On Right Now 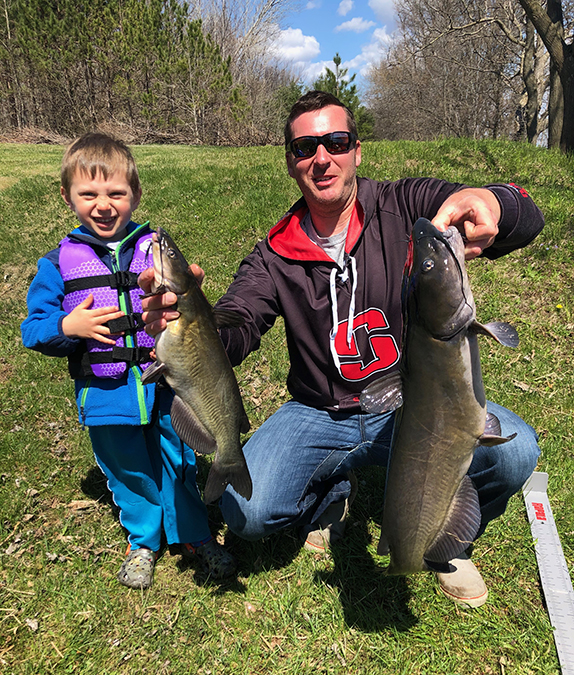 Hank Stefan put on an impromptu fishing clinic Wednesday afternoon and he didn’t even need his dad’s bass boat.

The 3 1/2-year-old son of FLW Pro Circuit angler Matt Stefan found a hot spot along the bank of the Wisconsin River and starting hauling in fish faster than his dad could thread a fresh nightcrawler on his hook.

In a little more than two hours, Hank landed a 13-pound limit of smallmouth, a catfish and two walleye. He had another fish on – something big, Matt says – but it yanked the rod out of his hands and into the river. The rod was later retrieved, but the fish swam off. As Hank proved, the fishing in central Wisconsin is on the upswing and Stefan (Matt, that is) feels the bass fishing in his neck of the woods is about to start turning on with the spawn just around the corner.

“With the weather warming, within a week they’ll be on beds pretty hard,” he said. “There may be a few that have already started. Between now and the end of the month they’ll be full bore.

Stefan was among the pros BassFan reached out to around the country on Wednesday to get the lowdown on the current conditions in their region and how the bass are biting in the lakes. Some of the anglers contacted had just come off the water so their observations couldn’t be any fresher.

Stefan said temperatures Wednesday near Junction City, Wis., were in the lows 60s. More importantly, the water was starting to warm into the upper 50s, which bodes well for fishing.

Stefan said it’s common for largemouth and smallmouth to spawn around the same time on the river with the largemouth opting for the warmer water in the backwaters or shallow channels.

If he were to head out on the boat with Hank, he’d rely mostly on a topwater bait, but have a soft stickbait and a smaller profile pitching jig at the ready.

“I love a Berkley Choppo to get them to come up,” he said. “They’re very aggressive on beds in the river here. They’ll spawn in 2 1/2 feet of water or less. If you put something over top of them, they’ll at least show themselves.”

That’s Wesley Strader’s bottom-line assessment of fishing in his part of the world this week. Cooler temperatures accompanied by clouds and rain have stunted any forward progress the bass were making, he said.

“It doesn’t make sense because you can go to Douglas (Lake) and catch them on (Strike King) 8XDs and 10XDs and catch them deep spawned out,” the Bass Pro Tour competitor and Spring City, Tenn., native said. “On Watts Bar, I think only 25 percent of the fish have spawned. The water is only 62 degrees there. Then at Chickamauga, they’re in every phase that they can be in. There hasn’t been much of a shad spawn because the water temperature is so cold.”

That’s not stopping anglers from flocking to the famed Tennessee River lake for a Big Bass Tour event this week.

“Everything is thrown off,” Strader added. “Usually by May, you can get out in the grass and find a shad spawn. I haven’t seen one yet. It’s typically not until the water is 70 degrees at daylight. Some guys have said it’s already happened, but that would go against anything I understand to be right.”

If he were to head back to Watts Bar today, he’d reach first for a wacky-rigged Zoom Zlinky soft stickbait, but also have a vibrating jig and a flipping combo within reach.

“You can catch big spots and smallmouth,” he said. “The odds of catching a giant largemouth aren’t great, but the odds are great we’d catch a lot of 2 1/2- to 4-pound fish.” 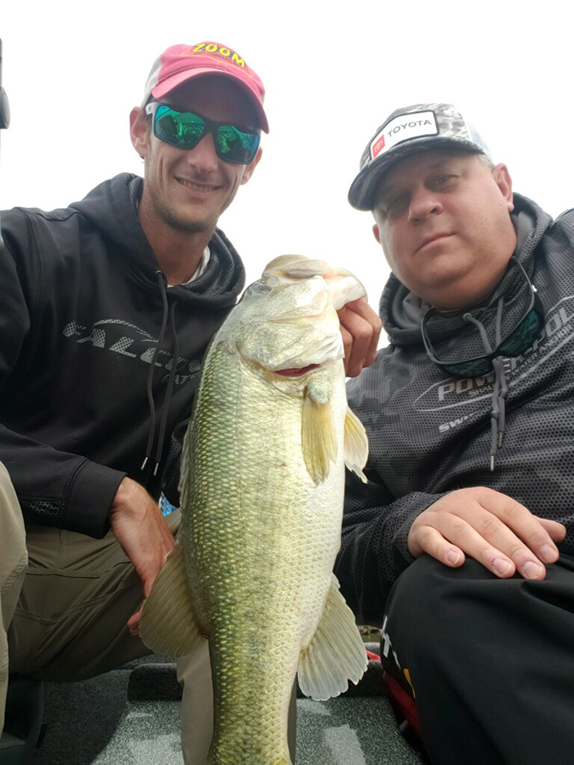 There are still a few fish on beds at Lake Greenwood, but Elite Series pro Brandon Cobb spent Wednesday slinging a topwater popper trying to coax post-spawners keying on herring and shad.

“I was looking for a mayfly deal or fish eating bream,” Cobb said after sharing the boat with Neil Paul, the executive director of Visit Anderson. “I caught ‘em like they were doing that, but I never saw a telltale sign. To me, they’re biting mediocre. It’s not because they’re not biting, it’s that our weather has been so weird. The fish seem to be split up doing a whole bunch of things. We saw some on beds today and I remember catching some off beds almost two months ago.”

Cobb said his favorite thing to focus on this time of year is to chase the herring, bream and shad spawn, which often coincide with a mayfly hatch.

“That’s all I do this time of year – find something related to them,” he said. “It’s not going on. The herring spawned a month ago, then quit and just started again. Everything seems so disjointed.”

As a result, Cobb has been venturing out to different bodies of water and trying different tactics in areas he’s not explored before. For instance, he fished at Clarks Hills Lake a couple times last week and went exploring up the Savannah River.

“I never do that,” he said. “I went looking for other things that might help me elsewhere that we normally don’t do around here.”

The post-spawn bite is getting cranked up at lakes like Lake of the Pines, where Brad Whatley had a guide trip Wednesday.

“It’s actually phenomenal,” he said. “They’re moving offshore daily. The ledge bite will be absolutely unbelievable in two weeks. A couple weeks ago, it started. There would be three or five fish in a pack, but it’s been growing by the day. Some schools today had 40 fish in them. They’re just gorging on shad.”

He said 50-fish days are the norm right now and earlier this week, a client hauled in a 9-pounder. It’s pretty common for the best five to weigh in the neighborhood of 20 pounds or more.

Whatley said things are progressing as they would during a typical spring. The odd cold front has moved through, but the fish are in the best shape he’s seen them in a while.

“The little bucks and spots are the first ones to move out,” he said. “The females (moving out) are beat up with bloody tails, but they look almost like they’re pre-spawn. They’ve got shad tails hanging out of their mouths.”

He said he’ll concentrate in the shallows in the morning, working a swimjig and a frog for a couple hours before getting offshore. The 16- to 18-foot depth range is where he tries to focus with a swimbait or Carolina rig, football jig or big crankbait.

“In this part of Texas, from noon on it gets better as the water warms up,” he said “It’s the same way in the post-spawn. That 2 to 4 p.m. window is when it’s the best.”

Lay Lake served as the venue and Davis said conditions were tough. He flipped and threw a swimjig, but admitted Lane caught the more meaningful fish.

“We’ve had all kinds of rain and current and dirty water,” he said. “Now things are clearing up and the turbines are being turned off.”

And the bass are turning off with them, it seems. It won’t be long before they round back into shape, though.

“They’re in that post-spawn funk, as everyone calls it,” Davis said. “By Saturday, it’s going to bust wide open. They’ll be chewing.”

The key, though, will be getting on the water early.

“Be prepared to be there at daylight and be ready to head home around 9 a.m. when the shad spawn ends,” he said. “If you’re in a derby and you don’t have them by 9 a.m., you might as well go back to the house.”

The bass in Arizona, specifically at Lake Havasu, are shifting in their summer pattern, according to Bass Pro Tour angler Roy Hawk, who was on the water the last two days.

“They’re hard into the post-spawn now and moving into a good summer pattern,” he said. “There’s a good bite up shallow on a frog and flipping tules. Then out deep, cranking and a Carolina rig are working in 15 to 20 feet.”

Hawk said some grass has sprouted up fast in parts of the lake to where it’s almost to the surface, but he’s more tuned in to the deep bite.

“I’m more interested in that summertime deal,” he added. “The fish get grouped up out deep. It takes a while to find them, but when you do it’s a lot of fun.”