Wilks' Objective Is A True Catch-22 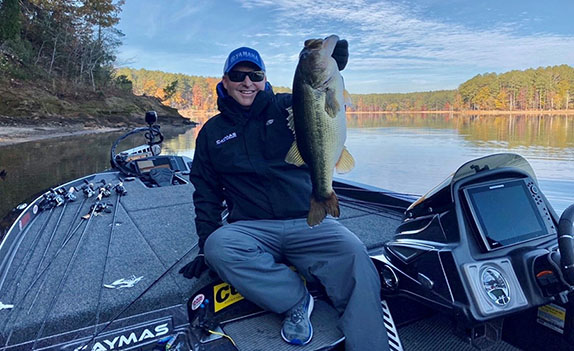 Dustin Wilks was a six-time Bassmaster Classic qualifier during a 14-year tour-level career.

Every angler has things he or she loves to fish. I love to fish current.

If you watch this week's episode of "Catching Bass with Dustin Wilks" on Sportsman Channel, you'll see me explain and show how to catch bass in thick wood cover in current. But there's more to it than I can touch on during the show and there are things I wish I would have thought to explain, after the fact, as we went through the editing process. This brings me to writing these supplemental articles to go along with each week’s show.

There are no better fans than BassFans and I’d love to share my show with you and help you be better anglers, as I believe one should never stop yearning for ways to improve.

A little background: Many who are new to the fishing game may not know me, but if you’ve been around a while you saw me compete in lots of tournaments from 1999 through 2013. I climbed as high as No. 9 in the BassFan World Rankings and qualified for six Bassmaster Classics. Now I have a family with two beautiful little girls and the tournament scene has taken a back seat. Today I have eight seasons of TV fishing shows under my belt and I love it.

In most every episode of Catching Bass, I just show up, no pre-fishing, often on fisheries I’ve never been to or haven’t visited in some time. My limit is 22 – that's the number of fish I feel comfortable with to make a show. It puts a lot of pressure on me to locate fish fast, then figure out how to catch the bigger fish that we all seek.

Some days it comes easy, but on most there is a lot of struggle to get to such a large number of fish. Nearly every show I film is done in one day. Some shows I split into two segments if I can’t reach my magic number of 22.

My cameraman often laughs because we get in the truck and he asks where we're going, and I tell him I have no idea. The truck is running and the decision is made on the way.

Enough about me, let’s talk about catching some bass.

There were several things I missed during this week's show. The first one is something I learned long ago while tournament fishing is to stretch your line. Not stretching as in hooking a big fish, but physically stretching your line the day before you go if it came off a new spool. I do this religiously after realizing many years ago that fluorocarbon can stretch quite a bit when brand new. This can help you avoid losing your first and maybe second fish of the day.

Fluorocarbon doesn’t have that rubber band reflex like monofilament, so once it's stretched out it will only go a minor amount after that. To get good hooksets while flipping, you have to have minimal stretch, especially on big fish. So I spool up, usually with 20-pound Yo-Zuri Top Knot for flipping and pitching shallow cover, then I hook my bait on the trolling motor strap ring and get out of the boat and stop about 20 feet away and pull. I pull hard enough to feel the stretch dissipate, but without pulling so hard as to stress the line. Then I go another 20 feet and repeat all the way out to 100 feet or so.

Stopping every 20 feet ensures I’m not going to have any springiness in the line when that 8-pounder bites first thing in the morning. The Yo-Zuri Top Knot is super strong and has minimal stretch in the first place, but I learned long ago that all fluorocarbon lines have some degree of stretch, so I recommend eliminating it regardless of which brand of fluoro you have confidence in.

I also missed the knot type. On the show, I did mention I tie an improved clinch knot for fluoro. Now there are all kinds of fancy knots out there that are nearly impossible to tie, but the simple improved clinch knot you probably learned as a kid and have gotten away from is perfect for fluorocarbon. The only time I break this line is when I use it too long without retying and it gets nicked.

One knot to consider is a loop knot, especially on lighter jigs or if you go up to 25-pound line. On some jigs, if you tie without a loop knot, the bait will not fall straight or act natural in the water. The loop gives it some leeway against becoming restricted, especially with lighter jigs and heavier lines.

If you prefer braid, I like a Palomar knot as It won’t slip, and the braid is so strong that the little bit of digging doesn’t weaken it enough to break it. I love braid, but not for flipping wood, as I personally feel on slower baits fish can see the line and braid tends to dig into cracks in wood, causing you to hang lures and fish. Braid has its place, but for flipping wood, fluoro is the way to go for me. We’ll get into braid in future articles.

If you watch the show you'll see I’m flipping a jig with a Culprit Flutter Craw on the back. It's a bait that fishes like a double-tail grub, but not so stubby and not as mechanical. The legs actually swim at different rates and are different lengths. I trim the bait down a bit and cut off the side legs, and it's one of my favorite jig trailers for rivers. The legs kick, but don’t have enough resistance to slow the fall. I want a quick fall in current because I’m putting the bait exactly where I think the fish will be.

I also want a rod that's super-heavy to get the fish away from the cover as fast as I can. I've come to rely on a 7-foot-3 Falcon Expert XH for my go-to pitching rod. This rod is stiff, but light and sensitive. My good buddy and professional fisherman Bradley Hallman told me about the rod and he was right – it's a broomstick!

I prefer that length for river fishing especially, as the balance is so good and it's easy to make hundreds, if not thousands of short casts during the day. A longer rod can wear you out. I did mention this rod on the show, but for those of you who don’t get Sportsman Channel, check that rod out. When a big fish in current hits and runs under a log, you gotta turn her around or she’ll be gone.

I hope you get a chance to watch the show and I hope this fills in some of the information gaps – I get a bit carried away trying to catch 22 fish.