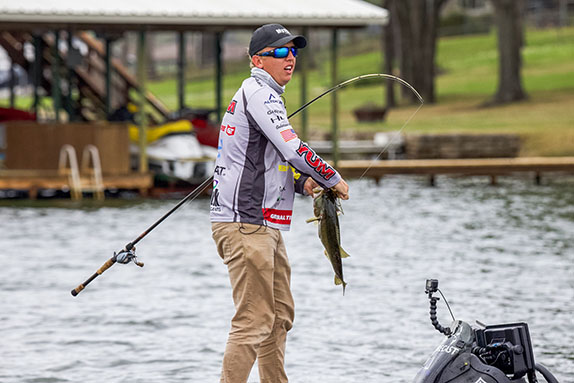 Lake Fork is one of the premier big-bass destinations on the planet, so it was fitting that it offered anglers a variety of ways to catch lunkers during last week's MLF Bass Pro Tour event. Lake Athens, the site of the 10-angler Championship Round, also gave competitors plenty of options regarding depths and techniques.

Winner Ott DeFoe sight-fished at Fork, then stayed exclusively offshore at Athens. With the exception of runner-up Alton Jones Jr., the 2nd- through 5th-place finishers did more blind-casting than looking.

Jones logged his second top-4 finish of the season primarily via sight-fishing, but he changed gears in the final period of both the Knockout and Championship rounds to make big moves up the leaderboard. He advanced to the Knockout Round with a 13th-place finish in qualifying Group B

"I wasn't around a lot of fish at Fork, but I was able to grind it out," he said. "Most of the guys fishing around me didn't even make the first cut. About all I can say is I survived it.

"I spent the majority of my practice marking beds and I had over a hundred that were for sure scoreable (2 pounds or heavier). I never had a real big starting fish, but being in Group B, that wasn't my goal. Even in the Knockout Round I went to fish that I'd marked on the first day of practice and they were still there."

He was in danger of being eliminated in the Knockout Round until he picked up a Booyah Pad Crasher frog in the latter part of the day and worked his way up to 2nd place.

"We were on a little bit of a warming trend and the water temperature got back up in the 60-degree range. I threw the frog in the areas where I'd been trying to sight-fish, but the clouds wouldn't allow it. I just worked it really slow."

He tried to sight-fish at Athens – a decision that he came to regret. His afternoon surge there came courtesy of a bladed jig.

"I spent 5 hours there riding around (competitors were allowed a 6-hour visit on one of their off days), but I never saw any big ones and most of the ones on the beds were spooky; you could tell they were pressured fish. That should've told me early on to look for something else.

"I did catch a 4-pounder doing it early (in the Championship Round), but it was a struggle. I reminded myself that I was there to win, even if it meant I didn't catch another bass the rest of the day. That's when I made the decision to move to the outside grass line with the bladed jig. I wasn't there for points and I had to scrap what I wanted to do and start doing what I needed to do to have a chance to win. It was the first time in my career that I'd made a decision like that.

"I fished points of eelgrass in about 8 feet of water," he continued. "I picked apart the key edges and irregularities that might not show up on mapping. Without my Garmin LiveScope I wouldn't have caught those fish."

With 5 minutes left in the round, he caught his final fish (which weighed nearly 4 pounds) on a jerkbait. That bumped him from 4th place to 2nd – a difference of $18,000.

"I'd caught three good fish there on a blade jig and I used the jerkbait as a clean-up," he said.

Other tactics he employed during this three days at Fork included blind-casting a YUM Dinger and throwing a swimbait and a wacky-rigged worm. 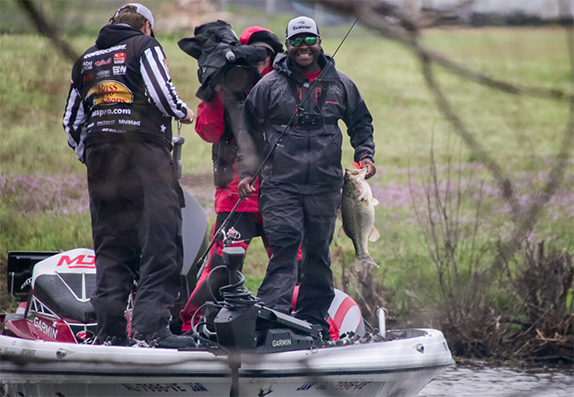 Mark Daniels Jr. stood atop the standings for the majority of the Championship Round, but wound up catching only three scoreable fish in the third period. He also had a dominant initial qualifying day, when he caught a tournament-best 84-15 on 24 fish.

He did a lot of his work at Fork in one very small area – a dredged out section surrounded by homes that was perhaps 40 yards from end to end. A bright pink floating worm and a craw that he employed for bed-fish were his primary offerings.

"In practice I didn't make a single cast with the floating worm, but it's a technique I'm very familiar with and it's one of my favorite ways to catch them in the pre-spawn and spawn," he said. "I knew I'd have one tied on regardless.

"I ended up finding a few fish on beds in that area and I went there on day 1 specifically to catch those. I caught four and my confidence was getting good, then I saw one boil and I picked the floating worm up and immediately caught one. I figured those fish were just starting to swim in there, so I started making laps around there with the floating worm."

His haul in the second qualifying round wasn't nearly as prolific (27-00 on seven fish), but it was enough to give him the win in Group A and an early berth in the Championship Round.

"I just happened to run into a large group of fish in a spawning area, but I was wise enough to recognize what was going on and not fish past them. On the second day I rolled in there and caught one that was almost 6 pounds and then I knew I needed to get out. I finished out the day flipping and swimming a jig."

He set he got at least 30 bites on the worm during his practice day at Athens. The action was much slower in the Championship Round, however, perhaps due to a combination of a storm that came through the previous night that might've pushed some fish away from the bank and a local tournament that evening that drew dozens of entrants.

> "The craw was a huge player – I caught four fish that were over 5 pounds on it," he said. "A buddy of mine designed it and (Z-Man) sent me four of them to check the action and tell them what I thought. We don't even have a name for it yet. I caught 17 or 18 fish on one bait; that's the beauty of ElaZtech."