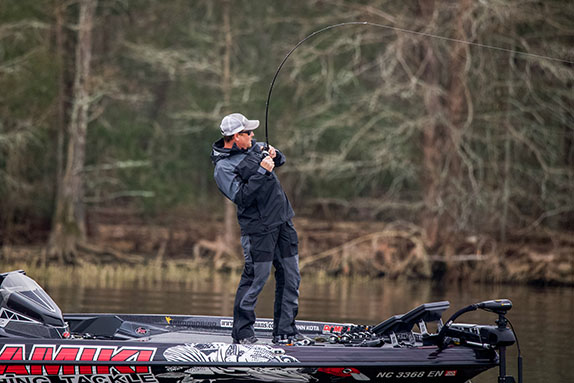 The longtime FLW standout and reigning Forrest Wood Cup champion came up just one position shy of winning his maiden BPT event at Alabama's Lake Eufaula. He won his qualifying group with 17 fish for 54-01 over two days to advance directly to the finals (bypassing the Knockout Round) and briefly held the lead in the Championship Round before Jacob Wheeler's epic flurry left Thrift and the other eight finalists far back in his wake.

Thrift thoroughly enjoyed his initial experience under the new format.

"I had a ball," he said. "I think what I liked the most is you get a full day of fishing; you don't have to factor in the (running) time from blast-off or how much time you're going to need to make it back to check-in. It's a true 7 1/2 hours of fishing and that's awesome."

Thrift, whose 40-11 haul in the Championship Round left him a little more than 27 pounds short of Wheeler's mark, had two patterns going at Eufaula (where he won an FLW Tour event in 2015) – isolated rockpiles and docks. He caught his fish on a large-bladed prototype Z-Man ChatterBait, a crankbait and a jig.

"I think the biggest thing for me was just being comfortable on Eufaula; it's a lake that I jive well with. Everywhere I go I feel like the next cast could be a 5-pounder. Even if I've had a terrible practice and I don't have anything figured out, I still feel like I have a chance because there's so many big ones in there.

"I only practiced one day and got three or four bites that were over 2 pounds, but I knew the rain was going to change everything and I'd have to figure out something during the event. I'd have to see what got real muddy and what didn't. I finally ran around enough on the first (competition) day that I figured out a little deal."

He began the derby by throwing the ChatterBait and crankbait in rocks that were covered by 2 to 4 feet of water and sat perhaps 30 to 40 yards offshore. He eventually started working those same areas with a jig when the conditions slicked off. That was the bait he also used on the docks. 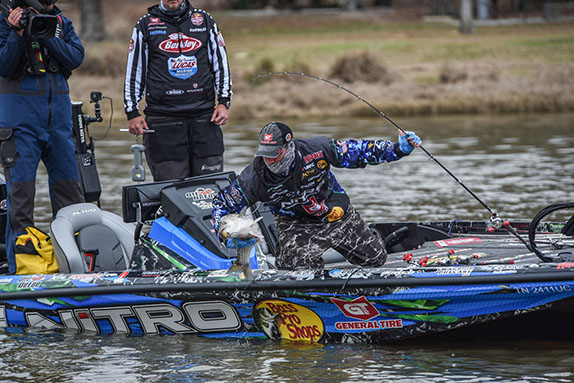 Ott DeFoe's program was comprised almost entirely of cranking as the reigning Bassmaster Classic champion employed two DT models and a new flat-sided bait with a circuit-board bill called the Slim. He finished 3rd in both the Knockout and Championship rounds with daily totals of 35-13 (11 fish) and 34-09 (10).

"It was what I wanted to do," he said. "I'd been there in March a couple times before, and the first time I was ever there (for a 2004 EverStart), I made the top 10 by cranking.

"I didn't expect the bite to be fast and furious and I knew a zero was a possibility. Running enough water and timing were a couple of big things, and my Humminbird 360 (fish-finder) was the most critical tool on my boat. I could pull up on the waypoints where I'd marked brushpiles and immediately see where I needed to be throwing.

"Catching one in the first 10 minutes (of his initial qualifying round) was a huge relief – I knew I wasn't going to zero."

His fish were holding in depths ranging from 5 to 12 feet and he utilized woody cover almost exclusively. Out of his 100-plus waypoints, about half a dozen were consistent producers. 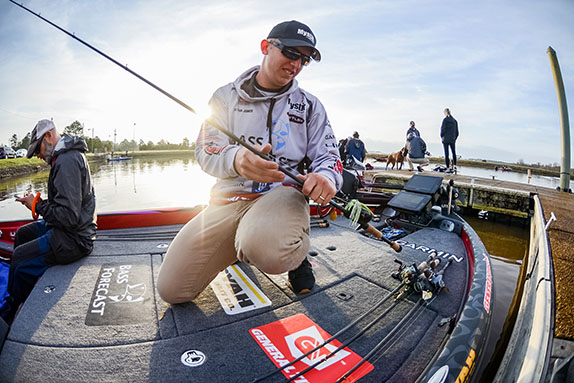 
Alton Jones Jr.'s 4th-place finish was his best to date at the tour level.

Beginning his fourth season as a tour-level pro, Alton Jones Jr. recorded his best-ever finish with a third-period rally in the championship round that moved him up five places from 9th. He caught nine fish for 26-12 in the finals.

Throwing a jerkbait on bridge pilings allowed him to advance out of his qualifying group.

"There was one bridge in particular that, when the water fell really hard, created a good constriction point in the back of a creek," he said. "A lot of bass funneled to it."

"I caught seven off that bridge (in qualifying) and five more right off the bat (in the Knockout Round). It died after that, but without those five I wouldn't have made the Championship Round."

He moved to a shallow locale late in the Knockout Round where he'd gotten some bites in practice, but which had muddied up too badly in qualifying. With it having cleared up considerably, he caught fish on a spinnerbait from the back ends of docks and from around stands of water willows.

"The key to the whole week was fishing with an open mind. I had to do something a little different every day, and in different areas, because the conditions had changed drastically."

> "Fifteen-pound line is a little heavier than I'd ordinarily use with a jerkbait, but the water was so dirty that I could get away with it," he said.

> He primarily threw a bait with double Indiana blades, but used one with a single Colorado blade in water that was especially dirty.

> Dustin Connell, the 5th-place finisher, was unable to be reached for pattern information by press time.