Mueller Maximized Areas He Had To Himself 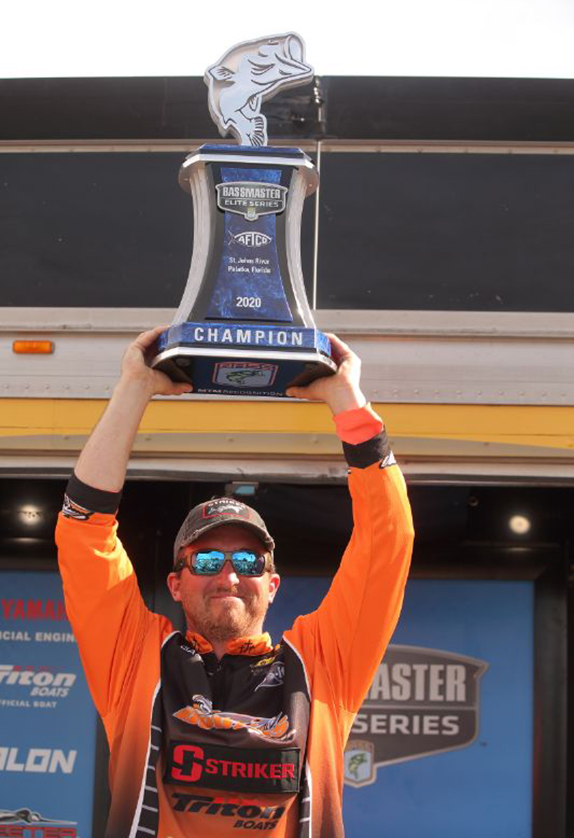 Paul Mueller built on a strong day 1 at the St. Johns River to claim his second career Elite Series victory.

Paul Mueller’s path to victory at the St. Johns River Elite Series was not rooted in some sort of magical pattern that only he was able to figure out. It didn’t occur because he relied on a backwater honey hole that had produced for him in the past. He didn’t have a magic prototype bait either.

Mueller’s march to a second Elite Series title in the span of 51 weeks came about because basically he had reached the “fed up” stage of frustration during practice and opted to go in a totally opposite direction on the river than where he’d been fishing.

Had he not mashed his trolling motor into a cypress knee on day two of practice and cracked the mount for his transducer – which prompted a trip to the service trailer – he would not have had time to stew about how maddening practice had been up until that point.

It was after that he decided to head down river from Palatka to explore main river shell beds. When those didn’t produce, he checked a couple creeks and he finally got a couple bites in succession to quell his frustration. After a fruitless final day of practice in Lake George and following two days’ worth of cancelled competition due to high winds, Mueller was left with few options to start the tournament.

Rather than join the crowds in George not knowing what condition the lake would be in, Mueller opted to head north to further explore the creeks from practice. It was a gamble and he knew it.

“Once they cancelled those two days, I had to go there,” he said. “I was thinking, ‘Maybe I can catch 13 pounds and get a subpar finish.’ There was no game plan or anything to be executed. The plan was to go where I got bites. It’s not like I could expand on those bites because I got them pretty late in the day when I was there in practice. Who’d have thought it was the winning area?”

It was hardly the St. Johns River tournament many expected. Wild fluctuations in water levels between practice and the eventual start of competition submarined plenty of anglers’ game plans. Meanwhile, Mueller plied a swim jig over the first couple of days and then incorporated a punching approach on the final to come away with the win.

“I’m still wondering if I’m going to wake up to my alarm clock and have to fish another day,” he said. “Who would have thought 10-12 (on day 3) would be enough to win with a 1-pound lead?”

Practice was a mostly miserable exercise last week for Mueller, who says poor pre-tournament mojo often leads to poor finishes for him. Along with the win, he said he came away with more proof that practice is not the be all and end all to tournament success.

“What I got out of this one was – and maybe this helps me grow as an angler –don’t read too much into practice especially with adverse changes in weather,” he said. “I never had four bites in practice in a day. I was down and out. I wanted an area where I could get a bite or a few bites, but it was tough. I’ve had tough practices and this one ranks up there with the toughest.”

And that’s not even factoring in the sequence that led him to begin exploring the northern portion of the river. It was last Monday (day two of practice) when he broke his transducer bracket and had to secure the transducer with a rope while he trailered his boat back to the service yard to get it remounted.

“I re-launched in Palatka and went the opposite way because I was disgusted with how the day was going,” he said. “The reason I went that way was to check shell beds in the main river, but I fished a couple and caught nothing. I checked the first creek I came to and didn’t get a bite. Then I kept going and found another creek that I eventually caught them in.”

He caught a couple two-pounders on a swim jig. Not exactly on fire by Florida standards.

“I was like, ‘Cool, I got a couple bites,’ but I still wasn’t sure of it,” he added. “On day 3, I went to Lake George where everybody goes. I went there because I knew the wind was coming and wasn’t sure about making that run up north for 2-pounders.”

After getting skunked in George and riding out two cancelled days, he made the call to go where he had gotten bites in practice.

“We focus on the negatives so much and I try not to do that in a tournament,” he said. “I’m still growing in going from practice to the tournament because I need a couple clues to get into a positive mindset. This win was special in that it helped me grow in realizing that you have to figure it out on day 1.

“It’s hard to win against these guys and to be able to do it on something that’s not in my wheelhouse made it even more special.”

Mueller’s decision where to start came up aces on day 1 as he walloped one of the three 20-pound stringers with 20-08. The water level was steady in his area, unlike other parts of the system that experienced a significant drop in water level with the sustained south winds.

He caught everything on day 1 around lily pads on a swim jig paired with a craw trailer, but he wasn’t shy about admitting that he’s far from a shallow-water expert, let alone in Florida around the spawn. He believes if another Elite Series angler with more skinny water acumen had free reign over the areas he fished, it’s likely that angler would’ve caught more weight.

“I had a lot of fun swimming it Alabama style,” he said. “I’ve never caught a bass up by me doing that. I learned that technique a few years ago and against these guys you have to learn that type of stuff or you’re not going to compete. There are a lot of guys, I guarantee you, that if they’d had the water I had they’d have better weights. I just had it to myself.”

Things got a little more challenging on day 2, but the swim jig around lily pads produced four of his five weigh-in fish as he totaled 16-02 to move past Kelley Jaye and into the lead.

On the final day, he returned to Trout Creek, but a lower water level prompted him to leave with just one keeper. He moved into Sixmile Creek just to the south and that’s where he added his other three keepers, including the 6-11 kicker that proved to be the difference for him.

He had more success punching hyacinth mats on the final day than casting the swim jig.