Conditions Challenging, But Big Ones Will Be Caught 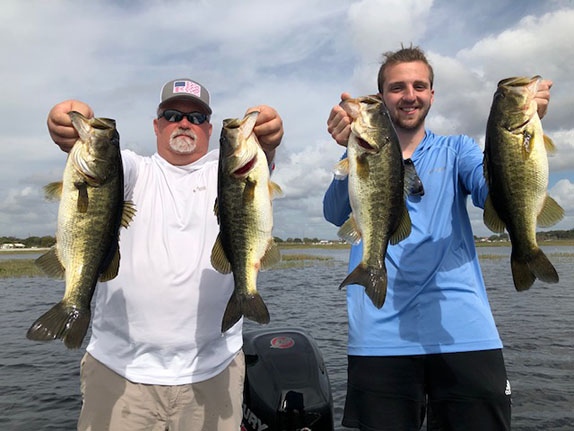 Despite some offbeat weather conditions, plenty of chunky Florida largemouths should be caught during the Kissimmee Chain Bassmaster Eastern Open.

By Steve Boyd
Special to BassFan

For the last week leading up to the Kissimmee Chain Bassmaster Eastern Open, it's officially been upside-down day for 7 days. Outside of Florida the entire country is experiencing winter weather, with reports from clients in Wisconsin that they have up to an inch and a half of ice. On everything.

Meanwhile, in central Florida where anglers will launch from downtown Kissimmee Lakefront Park with a full field expecting to fish in conditions that usually would be windy, cold and rainy, they will enjoy lows of 61 degrees to start and a blustery high of 82. It's weather that fits more along with November or March.

South winds out of Miami will continue to impact the temperatures and ultimately destroy any angler's hopes of fishing shallower than 4 feet in search of bedding bass or doing what Florida is famous for – catching big bass in the grass. The conditions will make for a challenging event that will possibly highlight some of the competitors who have traveled from northern lakes, where open water is more of their comfort zone.

The upside of having a tournament on the Kissimmee Chain is that there is no shortage of big bass and there will be a good number of pros who find them and make the event as exciting as it always is when Bassmaster comes to town.

So, what are the bass doing and how will they probably be caught?

For the last 2 months bass have been residing in 4-5 feet of water along with the forage they have been feeding on. During the last full moon they were gorging as they went into a full-blown spawn with water temperatures dropping to 62 degrees – the coldest we have seen this winter. But it was a quick wave of spawners that only lasted a day.

That quick burst of spawning activity was followed by a rise in water temperatures that have the lakes running at 71 degrees at the time of this writing. Fog and cloud cover have helped to hold temperatures down, but the fog may play into the tournament with a delayed launch. The good news is that if you can find the bass in an area they are feeding in, there will be a wad of them that can hold up for the entire three-day tournament as the weather looks to be holding steady rather than turning drastically like it can in Florida.

This might be the most I've ever written about the weather, but it will be a large factor for this tournament. However, enough about that.

Lake conditions are great with water quality above average on all lakes. Hydrilla was sprayed again in October but only Cypress and Lake Kissimmee show the results from that. Lake Toho, which always factors into a win for this tournament, has submerged vegetation all over the lake. Don't be surprised to see some big bags come from 6-8 feet of water. The bass are there, but to be successful, more wind will be needed to trigger them to feed.

A recent tournament on Lake Toho was won using a Carolina rig in open-water hydrilla for a 26-pound bag. It was much colder during that tournament, but I expect this technique to still play heavily in who is able to crack the top 10.

In another first, I'm going to predict a hard jerkbait could also be a key bait for a high finish on Toho based on where the bass are positioned and how they are feeding. Shiners are the key bait right now and few baits mimic them well. A hard jerkbait is one that tackles that job well. The variety of baits can range from a floating Rapala, a Bagley Bango Lure, Yo-Zuri 3DB to include a personal favorite, a Bomber Long A.

Another bait that not many talk about outside of Kentucky and Florida is the 10-inch worm. With light winds expected throughout the tournament, a Zoom Ol' Monster could take us back to its glory days of dominating tournaments with the most fundamental lure ever made. This particular presentation will require a great deal of confidence from whomever throws it, as it will provide quality bites but not a high number. Missed fish could be a factor talked about a lot during the weigh in.

Bladed jigs , swim jigs and spinnerbaits are usually good options this time of year in Florida, but I don't expect them to factor in unless winds get above 10 mph this week.

Honestly, I don't want to venture into throwing weight numbers out there because fishing based on the last week has been challenging unless using shiners. That's not unusual for this time of year, but the temps and winds should mean lure fishing is on fire as well. That hasn't been the case.

Average weights for the top 10 should range from 27 pounds as the high and 16 pounds at the low. The field will be stacked tight in weights between 13 and 16 pounds. The angler who leads day 1 will struggle to repeat the same number over 3 days.

Launch times will be huge, with bass feeding early and becoming less active after 10 a.m. Anglers making the run to Kissimmee or other lakes may end up back in Toho early to try and salvage a limit. Total winning weight should be around 56 pounds, with 36 pounds perhaps being good enough for the top 10.

It's all going to be a huge gamble with one angler hitting the jackpot for the 1st-place prize that they all are chasing. I'll be on the water hoping for lots of big bags and great results.