BACK
Strong Finish To '19 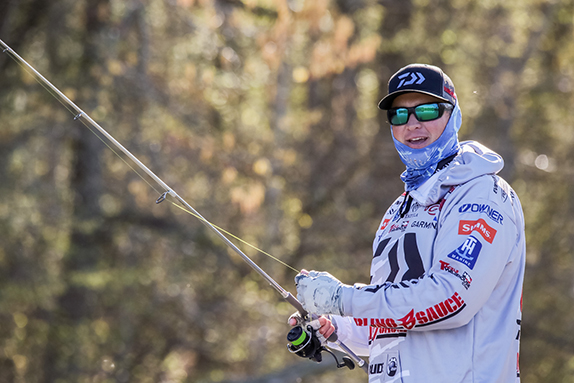 Cody Meyer believes if he continues to be consistent, he'll enhance his chances to capturing a victory.

Cody Meyer has heard it from his buddies, at home and on the professional bass fishing circuits.

“Hey man, when are you going to win a tournament?”

“How come so and so has won a couple, but you haven’t won yet?”

“You’re so dang consistent. What keeps holding you back from winning?”

The even-tempered Meyer takes the comments in stride. He puts on his best face, chuckles at the verbal jabs and tries to redirect the conversation elsewhere. Internally, though, it gnaws at him. Has for years. He’s been at this sport long enough, surely his number would’ve come up by now. But still, he waits.

“It has eaten at me,” he said. “I’ve been super close. Once I figure it out maybe I’ll win a couple of them, but hell yeah, it drives me nuts.”

During his nine-year run on the FLW Tour, Meyer was a fixture in the top 10 in points and he qualified for the FLW Cup every year he competed on Tour. He amassed 14 top-10 finishes with his closest brush with a victory coming at the 2010 FLW Cup, where he finished 2nd to Kevin Hawk at Lake Lanier. In 2014, he went toe-to-toe with Andy Morgan for the top spot in points before settling for 2nd, just nine points shy of a title.

If a survey were to be taken to identify the best anglers in the sport without a national tour-level victory, Meyer’s name would assuredly be near the top of the results. He is an undisputed kingpin of consistency, but he wouldn’t mind also being known as a tournament champion at some point.

“It’s definitely something I’ve thought about 100 percent,” he said. “I want to win. I feel like there’s a fine line between being consistent, which is something I’ve always prided myself on, and doing those other little things it takes to win.”

He pointed to another California native who built a reputation for consistency, but then began piling up tournament wins.

“(Brent) Ehrler figured it out,” Meyer said. “He’s always been consistent, but he figured out that other gear to win. There’s a point where you have to go, ‘I’m not going to do what I normally do to be consistent. I have to take a couple chances to try to win.’ For me, I think I get in the moment and then revert back to what I do to get bites and finish in the top 20 or make a check.”

Going back to his days as a FLW Series competitor out west, Meyer never broke through with a win. His consistency was evident, though. In 22 Western FLW Series events, he posted eight top-10 finishes, was the points runner-up twice and won the points title in 2009.

The points title earned him a spot in the FLW Cup that year – he finished 3rd – and he launched his FLW Tour career the following season. Now that he’s moved onto the Bass Pro Tour, it’s possible that Meyer’s first victory will come under the every-fish-counts format, something he thinks is just as possible as it was under the traditional format.

“I feel like I (had what it takes) in the other format,” he said. “I just missed a couple key deals. I feel like I’ve always been good at catching fish. I know I have what it takes, but it’s so hard to win these tournaments.”

He knows it won’t be easy now that he has to square off against a field which includes many of the top names in the sport.

“The guys I’m fishing against, they’re so damn good, it’s terrifying,” he said. “Not that FLW wasn’t good, but here you can’t slip one second because they’re the best at catching them. It’s like you need the stars to align and something crazy happen to win. I feel like it’ll happen, but hopefully I can keep cashing checks and still be able to make a living at it.”

After missing the Knockout Round in the first three events of the 2019 BPT season, Meyer turned his year around over the final five tournaments to climb into 29th in the points standings and snag one of the last berths in the Redcrest championship.

The highlight of his turnaround was the second tilt at Table Rock Lake. He finished 6th in Group A, then took 4th in the Knockout Round to make his first Championship Round. As the final day wore on, Meyer’s confidence grew that he could generate enough bites to possibly capture the win.

“It was a roller coaster deal,” he said. “In the Knockout Round, I was down and out, then I stumbled across this spot and was getting bit every cast. The place was loaded.”

With the competition schedule shifted back to a morning and afternoon timeframe for the Championship Round, he still caught fish at the same area, but had to move around some more.

“At one point, I felt like it was mine to lose,” he said. “Then this thing happened called Jacob Wheeler. You can see it coming, too. It was my best event of the year and at one point, I thought it was going to happen.”

For now, he’ll have to wait until 2020 to see if he can claim a W. He’ll take what he learned from the initial BPT campaign and adjust accordingly with season number two around the corner.

“It’s about being more consistent and not having bad events,” he said. “I’ve always been a really finesse guy, but I’ve been working on being better at power fishing and throwing a lot more moving baits because that’s what dominated this year.

“I haven’t caught a fish on a spinnerbait in 100 years. That has to change for me. I’m trying to be more consistent with it and versatile. It’s one thing to say it now, but I have to go do it and stick with it.”