Davis Rebounding After Bout With RMSF 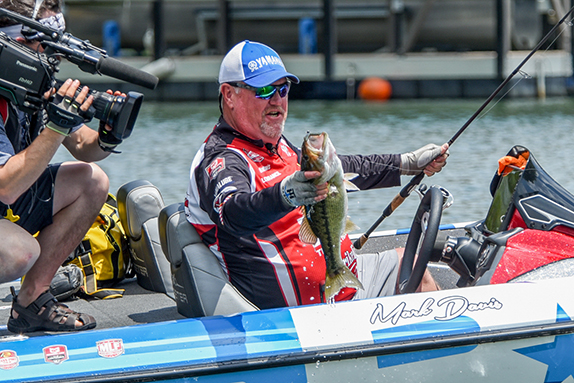 Mark Davis says he’s feeling pretty good these days, but that wasn’t the case six weeks or even a month ago.

The Bass Pro Tour angler and recent Bass Fishing Hall of Fame inductee spent the vast majority of September ailing from what doctors diagnosed as a case of Rocky Mountain Spotted Fever (RMSF). It was a scary experience for Davis, who doesn’t recall when, where or how he may have been the victim of a tick bite, the only known means of transmission of RMSF.

Data collected by the Center for Disease Control (CDC) since 2009 indicates a steady rise in cases of Spotted Fever Rickettsiosis (SFR), which includes RMSF. In 2017, more than 6,200 cases were reported compared to 495 in 2000. CDC data also shows that five states (North Carolina, Oklahoma, Arkansas, Tennessee and Missouri) account for more than half of SFR cases that have been reported.

Davis, who lives in Mt. Ida, Ark., didn’t break out in the splotchy rash that tends to be one of the main symptoms of RMSF, but he did suffer from a high fever, joint paint and a stubborn headache. After a week of not feeling right, he consulted with his doctors and a blood test confirmed he had RMSF.

“A long time ago, I learned that if you don’t feel good, go figure out why,” Davis said. “With this deal, the longer you wait to get it diagnosed and treated, it can get real bad. “I have no clue how I got it. I don’t recall a tick bite. It’s one of those things that I knew I had the symptoms, but it’s hard to diagnose. I requested the blood test and it came back positive.”

Once doctors pinpointed a diagnosis, Davis took two rounds of antibiotics – “they make you feel almost as bad as the disease,” he said – before he started to notice any improvement.

When reached by BassFan last weekend, Davis said he’s feeling much better, so much so that he’s been on the water multiple times a week at Lake Ouachita, where “they’ve been biting pretty good.”

He doesn’t see the RMSF diagnosis impacting his ability to compete on the Bass Pro Tour in 2020. He plans to head to south Texas after Thanksgiving for an annual hunting trip before shifting his attention to preseason preparations.

Davis also addressed the talk that he is considering retirement in order to take on a role within the tournament operations department at MLF.

“A lot of anglers have pushed me in that direction, but there’s been nothing official from MLF,” Davis said. “A lot of anglers evidently feel like I’d be a great tournament director and it’s flattering that they’d consider me for that. It’s a respect thing. It makes you feel good and bad about yourself at the same time.”

He said if he were to be presented with an opportunity, he’d give it serious consideration.

“It’s not out of the question, but I have no plans (to retire) because I have not been asked,” he added.

KO’d By KO Round

Following the 2018 Bassmaster Classic, Davis had hip replacement surgery, causing him to miss the remainder of the Elite Series season that year. That gave him plenty of time to recover for the launch of the Bass Pro Tour this year. As one of the original Major League Fishing competitors, he felt the first BPT season was a success.

“Overall, I was very pleased with our tour this year as most of the anglers were,” he said. “With so many guys coming into a new format, you’re going to have some mixed opinions because it takes some getting used to.

“Any time you do something new format-wise, you’re going to have naysayers. It’s a different ball game and unfortunately, when you get on these lakes that are full of smaller fish, it does become redundant catching the 1- to 2-pounders. But when you go to other lakes like in Texas, North Carolina or Florida, we saw some bigger fish.”

Davis made the Knockout Round in six of the eight tournaments but didn’t advance to a Championship Round. His best finish was 25th at Lake Conroe.

“I had a bad Knockout Round every time,” he said. “The first couple of days would go well and then I’d run out of fish. It was always something. Either I’d be on the same fish as someone else or the fish would change. I’ll say I had a mediocre season. I was consistent making the first cut, but not advancing was pretty frustrating.”

> Davis said his induction in the Bass Fishing Hall of Fame last month was a humbling experience, but he said word of his enshrinement has caused some confusion in his hometown. “I’ve had guys come up to me at ball games and say they hate to hear I’m retiring and that they really enjoyed watching me on the MLF shows,” he said. “I’ve had to tell them I’m not retiring, but I guess they think that since I was inducted into the Hall of Fame that means I’m done competing.”