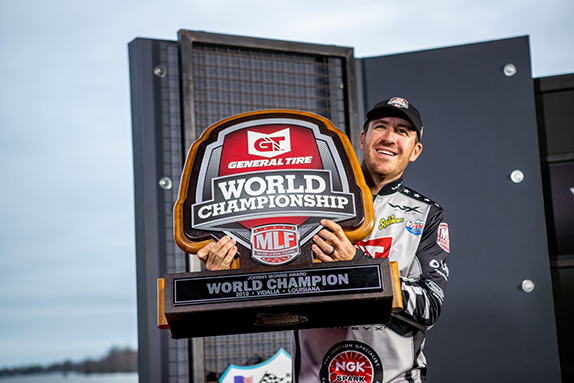 In the matter of eight months, Jacob Wheeler has won three Major League Fishing events, including the MLF World Championship.

Jacob Wheeler has prevailed against field sizes big and small. When he won the 2012 Forrest Wood Cup at Lake Lanier, he toppled a field of 46 anglers. When he won the 2014 Lake Chickamauga BASSFest, he beat 139 other competitors. In the two Major League Fishing Challenge Cups that he’s won (2017 and 2019), the fields consisted of 30 pros.

It doesn’t seem to matter anymore how many challengers he faces, Wheeler seems to always have an answer that carries him to the top of the leaderboard.

Such was the case again this past February at the 12-man MLF World Championship, which was filmed at the assorted oxbow lakes off the Mississippi River located near Vidalia, La. It was Wheeler’s first taste of the World Championship and he took a giant bite out of the competition. He breezed through the first three rounds, finishing first or second in each round, before thumping the three other finalists in the Championship Round.

His 47-12 total (15 fish) at Lake St. John dwarfed that of runner-up Takahiro Omori, who caught 21-04 (eight fish). The win was Wheeler’s third career MLF victory at the time and he added a fourth at the Table Rock Lake Bass Pro Tour. Three of his four MLF triumphs have come in the last eight months. It’s not a bad time to be Jacob Wheeler.

“I’m not complaining,” he said. “We all have our ups and downs and good years and good events, but I’ve definitely been on an upswing the last couple years. Things have been clicking. I’m making good decisions and I’ve been feeling good about it. To have the support I have from my family and sponsors, I’m in a more comfortable place there and that all plays into getting comfortable as a pro angler and having the ability to catch them.”

This wasn’t Wheeler’s first go-around at the oxbow lakes near Vidalia either. The 2018 MLF Challenge Cup was based out of nearby Natchez, Miss., and Wheeler had finished 8th in the finals there after winning his Sudden Death Round. But it was a different time of year and conditions were vastly different. Still, the familiarity was helpful.

For the Shotgun Round, Wheeler and five other competitors were dispatched to Lake Bruin, a 3,000-acre oxbow that he’d fished during the Sudden Death Round at the 2018 Challenge Cup.

“I knew it was a good lake with a lot of good, quality fish in there,” he said.

But the conditions weren’t ripe for a big showing on this day. Brent Chapman and Wheeler were the only anglers to catch 10 or more bass and Wheeler’s 17-09 total put him 2nd behind Chapman.

“It didn’t turn into what I expected,” Wheeler said. “I knew it wouldn’t be easy.”

Much of the lake was muddy from all the rain that had fallen around that time and rendering some of the water unfishable. In fact, two weeks after the World Championship, the Mississippi crested at 57.91 feet, the third-highest it’s ever been in Natchez.

“I fished my butt off to catch what I caught,” he said. “The places you’d fish for spawners, they were all blown out.”

Other than one fish he caught flipping, the rest came on a spinnerbait or vibrating jig around cypress trees in between the large residential dock structures that envelope the lake.

“I caught one flipping some reeds late in the first period and figured that would be the deal, but it never went anywhere,” he said.

After a day off, Wheeler returned to the water for the Elimination Round, which was located at the Black River/Cocodrie Complex, another venue he had fished during the 2018 Challenge Cup. By winning the Shotgun Round, Chapman earned a bye to the Sudden Death Round, leaving Wheeler, Mike Iaconelli, Skeet Reese, Edwin Evers and Brent Ehrler to slug it out for the two remaining spots in the Suddent Death Round.

It was flooded conditions this time around and after catching just one fish in the first period, Wheeler tallied 15 bass for 24-03 over the final two periods to finish atop the group with a cumulative weight (Shotgun plus Elimination) of 44-01 (26 fish).

“The water was in the trees and a lot of places were still blown out,” he said. “It was a completely different-looking fishery from Bruin.”

After trying a few things in the first period, he realized the fish were set up in the flooded grass, areas where the water was nearly over top of the reeds. Some of the grass had 5 to 7 feet of water in it. He fished a jig and buzzbait along steeper banks and also pulled a small swim jig over the tops of the flooded reeds.

“In the high-water situations, I tried to find areas that had a defined edge,” he said. “The goal was simply to get through to the next round and get a restart.”

Little did he know that the restart would come back at Bruin for the Sudden Death Round.

“I was 100-percent thinking we’d be going somewhere different,” he said, noting that MLF officials may have been limited by conditions and water levels at other potential venues. “When I found out we were going to Bruin, I was like, ‘What the heck?’

“I know (Takahiro Omori) and Chapman had won there and I’d had a tough time the first time there, so I wasn’t feeling confident. We’d had a couple warmer days, though, but I was still like, ‘I don’t know if I like this one.’ At the same point in time, it’s a new day and I had to keep an open mind and figure it out.”

MLF officials set a cut weight of 18 pounds, meaning the first four anglers to reach that weight would automatically advance to the Championship Round. Otherwise, the competition would play out until the end of the third period and the finalists would be determined by weight caught that day.

Wheeler said the first period was a bit confusing. The spinnerbait and vibrating jig bite wasn’t going how it had been a few days earlier.

“I spent some time graphing during the ride-around and found some docks with brush on them,” he said. “I started shallow with a vibrating jig and fished down one stretch near the boat ramp. Tak came through the other way with a spinnerbait and neither of us had caught one. Obviously, something was changing.”

His first fish was a 3-06 caught on a shaky-head off a brush pile. He tried that pattern for another hour, but it didn’t pan out.

“Not a lot of guys were catching them,” he said. “I stuck with docks for a while, then I went in between them and skipped a (vibrating jig) by a cypress tree and caught one. It was like, ‘Bingo!’”

He moved to a new stretch that had some docks that posed a challenge getting in between, but he was able to generate bites off the cypress trees and the ends of docks.

“It was the best of both worlds,” he said. “I just put the trolling motor down and just fished. Sometimes, that’s the best thing to do. Once I figured it out, it clicked.” 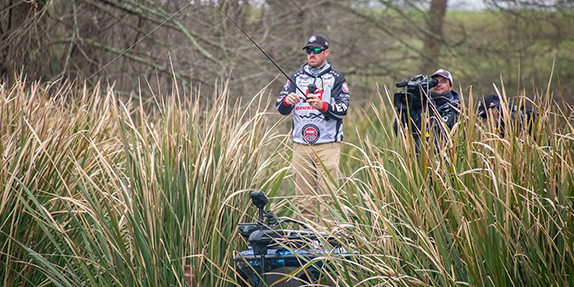 
Jacob Wheeler relied on a vibrating jig and spinnerbait while flipping flooded reeds on his way to winning the 2019 MLF World Championship.

He was the first competitor to reach 18 pounds in the second period, followed by Aaron Martens and Iaconelli. Omori finished 4th with 17-07 and claimed the fourth spot in the finals.

Lake St. John, another small oxbow lake on the Louisiana side of the Mississippi, was chosen as the site of the Championship Round. At 2,100 acres, it seemed big enough to serve four competitors. Ultimately, the whole day came down to what Wheeler caught in a small pond at the north end during the first period.

Wheeler spotted the pond while looking at the Lowrance C-Map during the ride-through and idled through the channel that connected it to the main lake.

“The water cleared up as I got back in there and I was seeing hydrilla,” he said. “I said, ‘This could get ugly if it’s what I think it is.’ It’s a pond on the north end with a creek leading to it. There’s hydrilla and cypress. This is the spot.

Wheeler’s first fish was a 4-06 caught on a vibrating jig. Twenty minutes later, he caught a 5-09. Twenty minutes after that, another 4-pounder. By the end of the first period, he was running away with it after tallying 27-02 on seven fish. Iaconelli, with four fish, was the only other angler to catch a fish in the first 2 1/2 hours.

“I happened to pull into the right place at the right time,” Wheeler said. “It was just the best-looking area on the whole lake. The mouth of the creek was straight mud, so maybe that deterred others from going in there.”

Omori eased into the pond toward the end of the first period and Wheeler played defense on a 75-yard stretch of cypress trees before catching another 4-pounder in front of him. Then, Martens joined the group.

“I figured the more the merrier at this point,” Wheeler said. “Because with everybody in there, they’d split up the fish and I already had a pretty good lead.”

To start the second period, Wheeler opted to head toward the mouth of the pond, ceding the rest of it to the other three anglers.

“They’re all great at that format, so I’m surprised they all came in there,” he said. “Maybe they felt there were no bass anywhere else. I fished around and milked a little area I hadn’t fished. By the third period, I decided I wasn’t going back in there. It was too much of a crapshoot and I didn’t want to be hemmed in there.”

He flipped flooded reeds on the main lake in the third period, adding another 10 1/2 pounds to an already sizable total.

“With the water way up in the stuff, that’s where they were spawning,” he said. “You couldn’t just pitch around the outside because they weren’t there. You had to get it back in the reeds. I finally got into an area where the water had cleaned up and they were moving up. It was more of a thing that I wanted to move around.”

> He combined an Indiana with an orange Colorado blade on the spinnerbait and he found a slower presentation was more productive than the vibrating jig.