BACK
Back To La Crosse 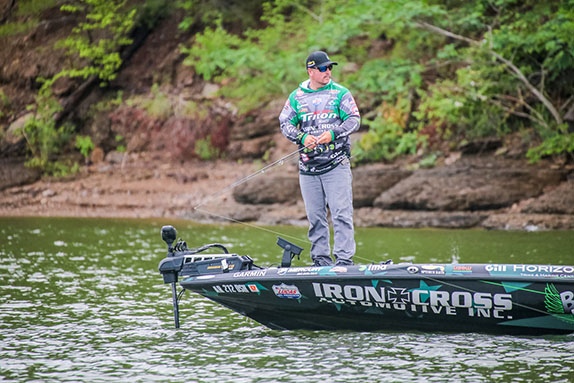 Qualifying for the Bass Pro Tour Redcrest will take Fred Roumbanis back to the scene of his first big tournament victory.

For someone who grew up in Northern California, has lived in Oklahoma and now resides in central Arkansas, La Crosse, Wis., sure holds a lot of significance for Fred Roumbanis.

It’s because it was the scene of his first significant tournament victory and basically the launch point for his career as a pro angler. It was the summer of 2005 and Roumbanis, who called Auburn, Calif., home at the time, was hanging on by a thread. He was nearly broke, living off a credit card and subsisting on drive-thru Mexican food.

He’d bounced around the western circuits for a few years and qualified for the 2004 FLW Tour via the 2003 Western FLW Series. He was inexperienced anywhere east of California, meaning he was a tenderfoot just about anywhere he launched his boat, which back then was a tired Skeeter that needed constant TLC.

“I came from California and grew up in the Bay area,” he said. “Fishing wasn’t much an option for most people. I was not one of the blessed ones.”

His dad drove cable cars in San Francisco. His mom worked as a secretary at a law firm. All Roumbanis wanted to do was fish.

After pulling out a seemingly improbable win at a Midwest FLW Series event on the upper Mississippi River in August 2005, Roumbanis pulled himself out of a tailspin that seemed destined to derail his dreams. He wound up collecting tournament winnings and prizes totaling nearly $100,000 that year and was part of the initial Bassmaster Elite Series roster in 2006. In 2007, he won a Bassmaster Major worth $250,000 and captured an Elite Series title the following year.

He qualified for four Bassmaster Classics between ’08 and 2014 and last year was among the anglers to depart the Elite Series in favor of the Bass Pro Tour, a new circuit launched by Major League Fishing. It was a significant adjustment despite his previous experience with the MLF format, but he managed to crack the top 30 in points this season and next month, his career as a pro angler will come full circle in La Crosse when he competes in the first Bass Pro Tour Redcrest championship tournament.

“Making the Redcrest was so important, not because it’s history in the making,” he said. “I get to go back to where it all started. That win not only helped me financially and from a confidence standpoint. After that, I went home and won a boat. Now, it’s a career.”

Magic on the Mississippi

To understand La Crosse's significance to Roumbanis, one must understand how he got there in the first place.

During a trip to Spain in September 2004 for the Eurobass Cup, Roumbanis recalled getting some advice from Kelly Jordon. Roumbanis had finished 101st in FLW Tour points that year and failed to qualify for the 2005 Tour (the top 100 were invited back). He wasn’t sure what circuit he’d be fishing in 2005. He’d qualified for the Bassmaster Tour via the Western Opens, but Jordon suggested he also try to get into the Midwest Division of the FLW Series as a way to re-qualify for the following year’s FLW Tour.

Roumbanis heeded Jordon’s advice and it paved the way for his establishing a career in the sport. The four tournaments were all based in the upper Midwest and around the Great Lakes, far from his comfort zone. He finished 62nd at the first stop at the Detroit River, missing the money cut.

“I was running an old Skeeter boat and I had to keep drilling holes in the side to reattach the rub rails,” he said. “Everything was falling apart. I stayed at the Knights Inn and was living on Taco Bell.”

The next event was two weeks later on the upper Mississippi River out of La Crosse, Wis., but Roumbanis spent most of that time recovering from a case of shingles.

“My whole body felt like broken glass,” he said. “Luckily, we caught it within the first 24 to 48 hours.”

Still, he was bed-ridden for several days and had a co-angler traveling partner from California drive him to Wisconsin.

“I practiced for two days and was in bed for the rest of the time,” he recalled.

Money was tighter than tight back then. He gassed up his boat only when he had to and oftentimes his co-anglers would pitch in more than they normally would. At the angler meeting prior to the La Crosse tournament, Roumbanis informed tournament director Chris Jones (now the FLW Tour emcee) that it was likely his last event. The balance for the next tournament’s entry fees was due the following week and Roumbanis didn’t have the funds.

“It’s embarrassing to admit, but I was negative in my account and I was living off imaginary Bank of America money,” Roumbanis said. “I told Chris that would be my last event and that I’d given it my all.”

Then Jones asked him how his practice that week had gone. Roumbanis, struck by Jones’ positive tone, replied he’d that found a couple areas where he could get bites on a frog – the locals were all in on a swim jig – and that he might be able to catch 12 to 14 pounds each day. Jones told him that if he delivered that kind of weight, he might make it through to the final day. 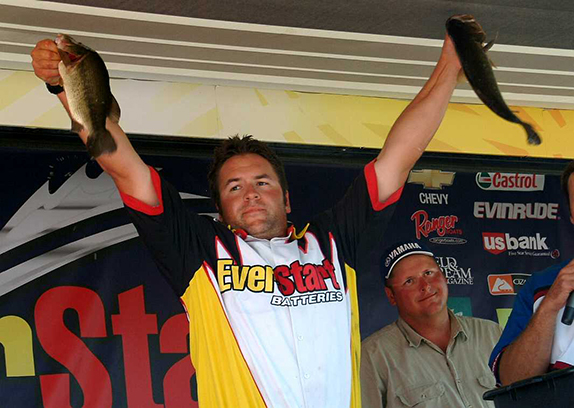 It was an unexpected pep talk from an unlikely source, but Roumbanis took it to heart. He came in with 14-06 on day 1 and caught 12-15 on day 2, proving Jones prophetic as he was sixth after the initial two days. A bold decision late on day 2, though, is what earned him a spot in the top 10.

“I went to where I caught them on day 1 and caught a 4 1/2 and a 2, but we had a hard north wind and it cooled everything off,” he said. “It was noon before I realized the frog bite was dead unless I went to pool 9.”

So off he went with gas paid for by his co-angler. He arrived at the lock and the lockmaster told him it was a bad time as the tournament boats that had locked through earlier in the day were heading back because a barge was scheduled to pass through shortly.

“So I lock down and as I’m running, everybody is waving at me to turn around, but I just went,” he recalled.

After surging his boat over a sandbar, he finished his limit with three frog fish in just as many casts. He promptly pulled his trolling motor and headed back to the lock. As he got closer, he saw the barge was there.

“It was my moment of truth,” he said.

He got into the lock and made it back to check in with seconds to spare. On shore, other anglers gossiped about the dumb decision Roumbanis had made. His 15-04 was the biggest stringer of the day and he sealed the win the following day with an 11-04 bag. He banked $10,000 in cash and a new Ranger boat valued at $40,000.

“At the time, I had an Okuma-wrapped boat and truck,” he said. “It looked good from a stickers point of view, but everything was falling apart. From being flat broke to winning an event, it was nuts.”

He drove his co-angler back to California, then drove back to Lake Michigan for the next Midwest Division event, finishing eighth and earning another $4,300. He finished 72nd at the final tournament at the Detroit River, but he was content since he’d qualified for the 2006 FLW Tour as well as the inaugural season of the Bassmaster Elite Series via the Western Opens.

“The most important thing is I proved I could win,” he said.

And while he’s been back to La Crosse multiple times for Elite Series events – he finished 4th in 2013 – heading there with a $300,000 payday on the line will complete the career arc he was uncertain would even be possible 15 years ago.

“It’s just always a good feeling going back there and to go back for a championship with 29 other guys, I’m so stoked,” he said. “Things change a lot there. I never catch them in the same area twice, but I have good mojo there.”

Roumbanis admitted starting the season with some apprehension about the wholesale change in tournament formats. For more than two decades, he’d been accustomed to trying to catch the five biggest bass in a given day. Now, his profile as an angler would largely be determined by how many bass he could catch in a given day, setting up the classic quantity-vs.-quality scenario.

“I started the season with questions about my ability and everything and if I’m capable of succeeding in this format,” he said.

Bottom line, he had to retrain his brain how to prepare for a tournament and then how to navigate the competition.

“In essence, I had to relearn how to fish,” he said. “I’ve been conditioned over the years to hunt five big bass and in doing so, you look for certain angles and casts. Now, it’s rapid fire and you have to catch, catch, catch non-stop.”

He struggled at the first two events, largely because he tried to keep his options simple. Too simple, as he later discovered.

Once he got comfortable in junk-fishing mode, which is how grew up fishing, his season turned around. He caught fish on a swimbait at each tournament and filled in the gaps with countless other lures.

“It’s crazy the different baits I’ve caught them on to make it go down,” he said. “Everything I’m doing is to catch every fish I can. It’s literally the most exhausting way I’ve ever fished, but it’s the most rewarding at the end of the day.”

Getting into the 30-man Redcrest field was quite a chore, though. Roumbanis struggled at the start of the season, finishing 61st and 65th at the Kissimmee Chain of Lakes and Lake Conroe, respectively. After that, he bagged six straight paychecks and finished in the top 25 at the final five tournaments.

The announcement that La Crosse was going to host the first BPT championship came shortly after the third tournament of the season in North Carolina. At that point, Roumbanis was 66th in points.

“When I found out we were going to La Crosse, it lit a fire underneath me like never before,” he said.

He entered the season finale in Wisconsin 24th in points and needed a top-40 showing to secure a Redcrest berth. He achieved that with an 11th-place finish that saw him nearly make the Championship Round for the third time in the last four events.

He started fast in the Knockout Round, leading the group of 40 anglers through the first period with 12 bass for 21-05 at Lake Butte des Morts. Action slowed for him in the second period and he eventually slipped to 11th, failing to qualify for the Championship Round by 10 ounces.

While disappointed he didn’t advance to the final day, he’d already achieved his goal for the week. The Knockout Round was more of a victory lap for him. Based on his performance over the last two events, he also qualified for the final of four MLF Cups.

“I knew if I didn’t catch them,” Roumbanis said, “it would cost me a Cup and the Redcrest.” 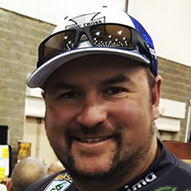