Both Green, Brown Fish Were In Play 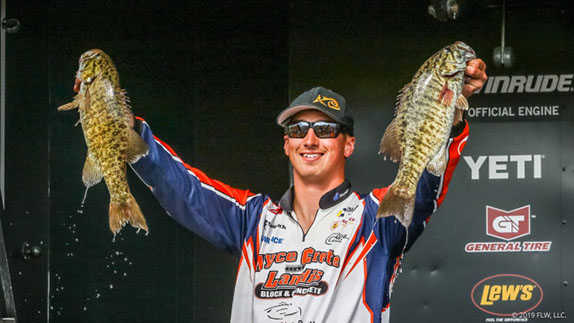 If you didn’t know this before the FLW Tour event at Lake Cherokee, you probably know now – the lake is one heck of a smallmouth fishery.

The east Tennessee reservoir showed out this recently as its smallmouth population rushed to the bank to spawn, allowing winner Andrew Upshaw and most pros to catch dozens of fish per day.

That said, targeting brown fish wasn’t the only way to succeed. In fact, if not for a key lost kicker, largemouth might’ve been the winning species at Cherokee.

Here’s a look at how the rest of the top 5 capitalized on what was a total catch-fest in Tennessee.

Grae Buck had an eventful tournament, to say the least. He’ll remember it for his first top 10 on Tour, but many will also remember it by watching the video of him falling out of his boat trying to land a fish on day 3.

When he stayed in the boat, though, he was running a spawning-smallmouth pattern almost identical to Upshaw's.

“I was looking for big boulders that formed barrier walls to block the current,” Buck said. “You could tell just by looking at the rock or satellite imagery which ones were the right ones, and if it had started eroding away or had gravel at the base, it was even better.”

Buck hovered in and around the top 10 all week, but it wasn’t until day 4 when he truly made a run at winning the tournament. Problem was, he had such a good morning he never was able to fully upgrade beyond it.

“I had my entire big bag by 9:15 a.m. I never could upgrade. I tried fishing more the main lake, where the bigger ones seemed to be coming. I even tried flipping some laydowns for a lucky kicker largemouth at the end. Not much more I could’ve done.”

> He chose a hi-vis yellow braided line to help him detect subtle bites by watching his line jump or move.

> Main factor in his success – “Having the Anglr App. It has Google Earth, so I could look at satellite imagery to find the right rocks. Then I’d mark them and sync it with my graphs.” 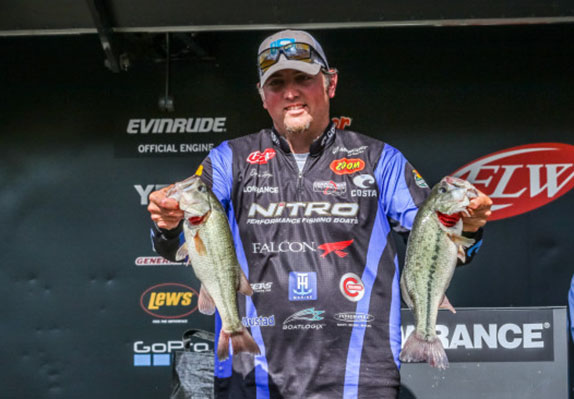 “I should’ve won this one,” Hays said. “I was on the right pattern, and I had the bites to win. That dadgum big one on day 3 cost me.”

While most the field was targeting smallmouth, Hays said he simply never could get dialed in on them in practice. That said, up until an hour left of practice he couldn’t get dialed in on largemouths up the river either, and he was legitimately worried about being able to catch a limit.

That’s when he found a point way up the river where the channel swung against both sides that produced two big largemouths. From then on, that’s basically where he camped for four days, as he flipped a jig to every big boulder and laydown on both sides of the point. Some days they’d be on the left, some days on the right, but he always got at least a pair of kicker bites there.

On day 3, he actually got three bites from fish over 4 pounds, but he lost the third one when it jumped while he was reaching for the net.

On the final day, he stuck a 4-pounder right off the bat, but he never got another big bite in his effort to catch Upshaw.

> Main factor in his success – “Having my area to myself. There weren’t enough fish up there to share, but having the freedom to run around up the river and find those places where fish were coming to was key.” 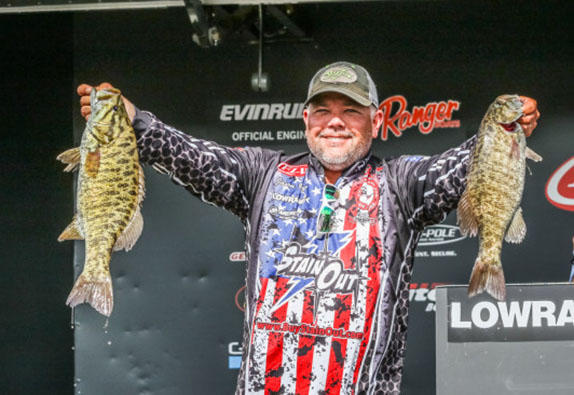 Jason Reyes may hail from Texas, but the Tour veteran sure loves fishing slowly with a spinning rod. Just so happens, this tournament set up perfectly for that.

“I’d just put my trolling motor on as low as it would go and just crawl down the bank tossing at anything that looked like a high-percentage spot for a smallmouth to spawn around,” Reyes said.

Bigger boulders seemed to be Reyes’ preferred targets – more specifically, any cracks or spaces between them.

In doing so, he was getting more than 40 bites a day, and for three of the days, he found plenty of quality in amongst those bites, including a 5-pound smallmouth on the final day to make a run at the win. Unfortunately, he never did get a big bite on day 2 to help upgrade him, and it’s what ended up costing him, as he never could quite catch up.

> Main factor in his success – “Just slowing down and grinding through my areas. I never got in a hurry. I just kept making multiple pitches to the best areas.” 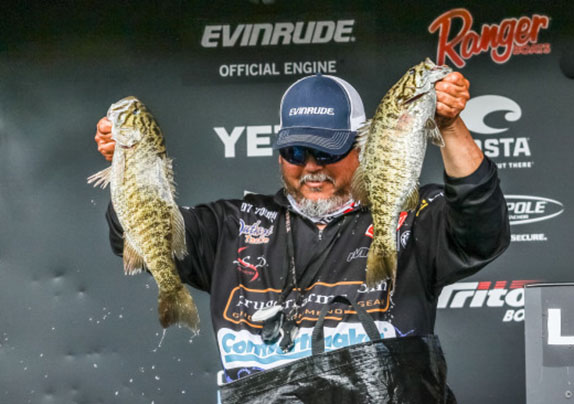 
Andy Young had intended to fish offshore, but ended up finding quality in the shallows.

Andy Young came to Cherokee with all intents of trying to find an offshore pattern, but after a half-day of practice not finding anything, he decided he'd better look shallow.

From then on, it was pretty simple. Young utilized a shaky-head throughout practice to find a number of areas, especially ones with large “table” rock.

Come the tournament, though, he couldn’t get bit on the shaky-head and instead relied on a Ned Rig do stay consistent throughout.

“I had a great event,” Young said. “If you can believe it, I never got a kicker all week. All my fish were 3- to 3 1/2-pounders. My biggest fish of the week came with 10 minutes to go on day 4, and it came randomly throwing a swimbait. But if I’d gotten a couple kickers, maybe I could’ve won it.”

> Main factor in his success – “Probably that jighead. It truly is the perfect head with a good 2/0 Gamakatsu hook. It kept those fish buttoned up.”