Jordan Rules! Lee Leaves Everyone In His Wake 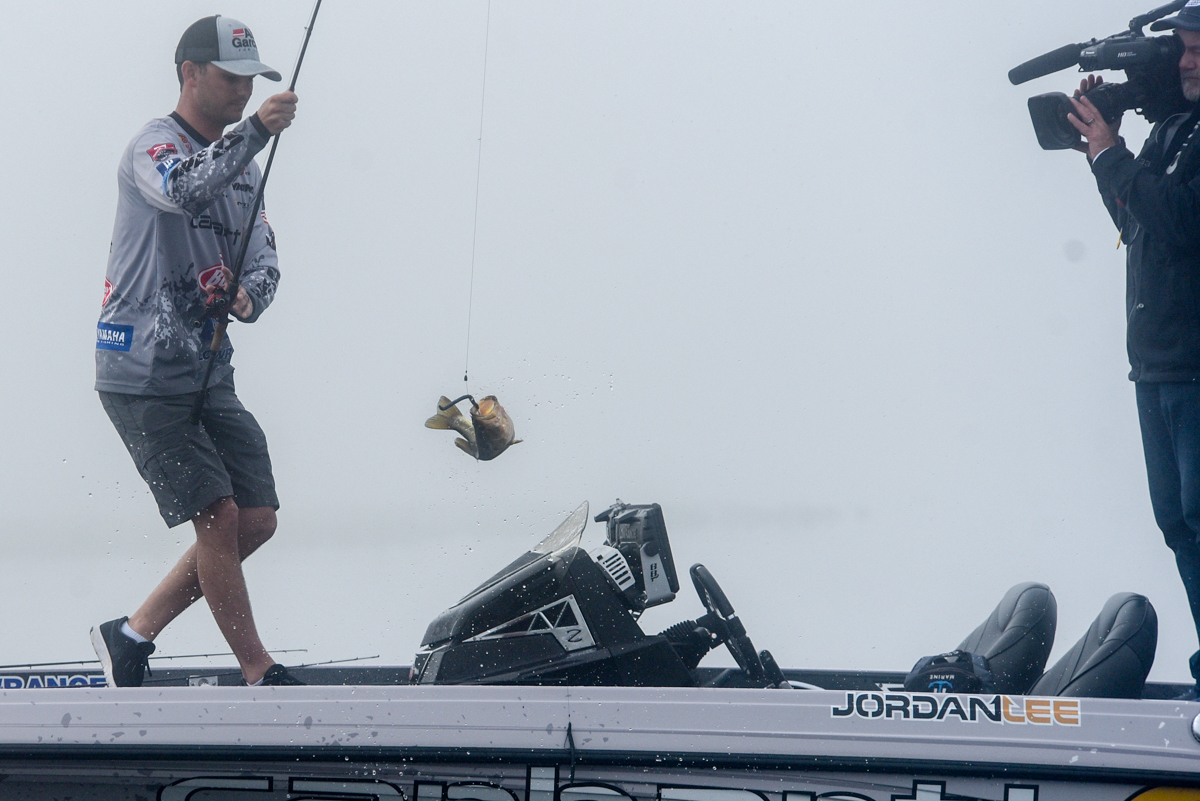 Jordan Lee lands one of his 26 fish during the final round of the Kissimmee Chain of Lakes Bass Pro Tour.

No matter the format or venue, Jordan Lee just has a knack for delivering in the clutch.

Kind of sounds like another famous athlete who was due to play on Sunday.

As much as his consecutive Bassmaster Classic wins mean to him, there was something else Lee has craved during the early part of his career – a regular-season tournament victory. All he had to do was make the move to the new MLF Bass Pro Tour to get it done.

Lee, an unquestioned young star in the sport of bass fishing, delivered another late-day rally, this time at pint-sized Lake Garcia in east-central Florida where the championship round of the inaugural Bass Pro Tour played out. His 40-pound flurry over the final 2 1/2 hours catapulted him past Jared Lintner and into the history books as the first champion of the first major tournament circuit to employ a catch-weigh-release format.

Lee caught 16 fish in the third period alone and finished with 26 on the day to close with 55 pounds, 1 ounce, nearly 11 pounds better than runner-up Edwin Evers.

“It hasn’t sunk in totally,” said Lee, who also needed a third-period rally Thursday to finish 20th in the Group A Elimination Round and qualify for the Knockout Round. “It’s obviously a really good feeling. To know where I was early in the tournament – I didn’t have a lot going for me. I was fishless. I made a comeback and learned every day and got a little better every day. It’s awesome to win the first event. It’s a big deal for sure.”

Evers, a winner of two MLF Cup titles and one of two finalists with previous competition experience at Garcia, led the way with 28 fish today that weighed 44-03. He pulled to within 6-plus pounds of Lee with less than five minutes to go, but Lee countered with a 3-10 at 3:43 p.m. to salt away the win.

“When I got to within 6 pounds with 15 minutes to go, I thought, ‘Okay, I need a 6-pounder,’” Evers said. “I just didn’t get it done. Hats off to him and congratulations. I lost a lot of fish. There’s no way around it. It was crazy. There were a lot of fish guarding fry. I could’ve caught a bunch more.”

Lintner held the lead after the first and second periods but tallied just 8-09 (six fish) in the third and slipped to third with 33-09.

Here’s how the rest of the 10 finalists finished up at Garcia:

The start of competition was delayed slightly this morning due to some dense fog at Garcia, a 3,100-acre lake that was among the venues used for the 2018 MLF World Championship.

Lintner started fast, catching seven fish for 13-05 to seize the lead after the first period. He relinquished the lead to Evers in the second before surging back in front with a 5-05 kicker that accounted for nearly half of the 11-11 he caught in the second. Entering the final period, Lintner had caught the most fish (13) of the 10 finalists and had a 5-plus pound cushion on Evers.

The big fish eluded Lintner in the third, however, as he was overtaken by Lee and Evers.

“If I’d have lost by 1 1/2 pounds, I’d be freaking out,” Lintner said. “When you get beat, you get beat. I’ve been on both sides of it. I’m a little disappointed. When you get beat by a guy who figures it out, I don’t have any excuses. I just didn’t allow myself to expand on the area where I got some bites.”

Lee started the third nearly 10 pounds behind Lintner, but erased a good portion of the deficit with three fish within six minutes of each other. A 3-02 moved Lee into second, cutting the deficit to 3-05. Lintner countered with a 1-03 to push his lead back to 4-11. At 1:53, Lee pulled even with a 4-11 bass, then surged ahead to stay with a 2-09 just before 2 p.m.


Lee was all smiles after landing this 3-10 in the closing minutes Sunday.

Over the next 60 minutes, Lee carded seven fish that weighed 17-04 to gain some separation from the field. With roughly an hour to fish, Lee’s lead on Lintner was 13-12. By 3 p.m., the race was effectively on for 2nd.

“That last period was obviously pretty magical,” said Lee, who caught the majority of his fish today on a vibrating jig. “I got in an area that had clean water and good hydrilla. Most of the lake was kind of dirty or off colored and did not have a ton of grass. There were not a lot of places where it’s really clean. I was moseying around and I trolling-motored my way over there and could tell the water was cleaner. I immediately started to get bit.”

The area Lee settled down in featured plenty of submerged vegetation, but also had some bare spots mixed in.

“It was patchy, and I think a lot of those fish were spawning and some were pulling in,” he said.

With as much weight as he caught in the third, Lee said he never felt as though he could ease up because he knew the fish were there for someone else to make a big rally, too.

“I never felt like I could relax,” he said. “I hit a dead period where I went about 20 minutes without a keeper, but it seemed like an hour and that’s when Edwin was coming on pretty strong. I was just like, ‘Here we go. I have this big lead and I’m going to lose it at the end.’”

When he landed that 3-10, though, all that anxiety dissipated.

“I kind of knew that was the nail in the coffin, so I was pretty pumped getting that one in the boat,” he said. “That was the icing.”

“I got in a little lull in the second period,” Evers said. “I got back in there too far, too shallow, but I was getting just enough bites to make me think I could find a nugget back there. That just led me astray. The fish got smaller. I just got too far back in there.”

Evers started today on a deeper spot that produced a number of big fish during the World Championship last year. It wasn’t as productive today, though.

“The hydrilla had some snot on it and I’d been out there 10 minutes and there were other guys around that hadn’t caught anything either, so I left,” he said. “I just went shallower. I headed east and went shallow.”


Jared Lintner held the lead after the first two periods, but couldn't connect with any bigger fish in the final period.

As he did that, he started seeing more bedding areas, especially around the ends of the berms where the bottom was firmer. Where he could find scattered hydrilla in amongst groups of lily pads is where he caught all of his fish today.

“That’s what you look for in Florida,” he said.

He carded five fish in the first period and seven more in the second.

Lintner was consistent, catching at least six fish in each period, but after his 5-05 at 12:51, he only caught one 2-pounder the rest of the day. He wishes he could’ve explored more of the lake, but he was unable to get on plane with his outboard after his intake was clogged by some grass after launching.

“I couldn’t get on pad so I had to idle around,” he said. “I saw some mats and said, ‘That looks good.’ I caught a few little ones and never started the boat until the end of the day.

“I only saw a small section of that lake, but I wish I would’ve taken 10 minutes and ran around to visibly see if there was a deeper section or what it looks like. I only fished an acre-sized area.”