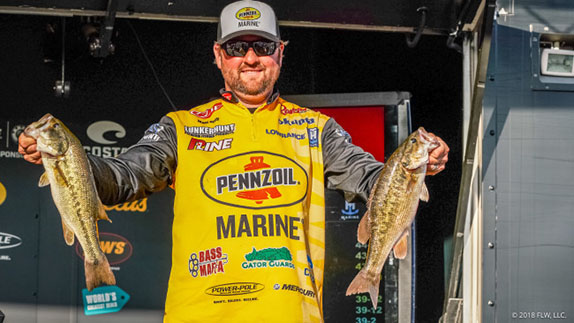 Matt Arey has been encouraged by how open the line of communication has been between the new Elite Series field and B.A.S.S. officials.

In less than five weeks, Matt Arey will be making his first casts in a professional tournament series not named the FLW Tour.

Arey spent the past 12 seasons as a pro on the FLW Tour, where he collected two victories, qualified for eight Forrest Wood Cups and won nearly $1 million, but after an offseason highlighted by the launch of Major League Fishing’s Bass Pro Tour, which touched off an unprecedented spate of anglers shifting to different circuits, Arey landed with the revamped Bassmaster Elite Series.

Arey was part of a group of established FLW Tour anglers that B.A.S.S. targeted for invites to the Elite Series to help offset the loss of competitors to the BPT. He will be among the 35 anglers who’ll be new to or beginning a second stint with the Elite Series in 2019.

“I’m really excited about moving over to the Elites,” Arey said. “There are things about FLW that I loved and I thank them for that. It’s a very family-oriented atmosphere over there and they always treated us well. It was pretty awesome. That aspect I will miss. On the flipside, B.A.S.S. has lot of new things in the mix. Things are changing with only 75 of us now.”

Along with a smaller field, other changes include a redoubled effort to create more angler-focused human-interest content. A camera crew from JM Associates, the media arm of B.A.S.S., recently spent a full day in North Carolina with Arey to gather footage to be used throughout the 2019 season. Arey said he’s enthused by the effort being put forth by the organization as it enters a new era.

“In the past month or two, I have had more calls and contact with different B.A.S.S. employees, from social media and JM just getting content created,” he said. “They are working hard. I know I’m new, but from the second I went to B.A.S.S., folks from B.A.S.S., including [owner] Chase Anderson, reached out to me and talked about how to move forward as a team. It’s not just employees calling the shots, but we’re helping make the decisions. With 75 guys, it’s easier to let us take some of the reins and have control on how things come to fruition.”

Ready to Get Started

Arey is an avid hunter and a firm believer in taking his mind off of fishing during the offseason. The two simply go hand in hand for him. He hasn’t made a cast in two months, so he’s recharged and ready to get back to the competition.

“I’m extra excited to go back to fishing,” he said. “If I fished 12 months out of the year I’d get burned out. When I hunt for 2 to 3 months, then I’m ready to rock. It gets me eager to get back on the water.”

Also fueling his desire to get back to casting for cash was just the chaotic nature of the offseason.

“I spent more time on the phone this past offseason than I did in my first 12 years total as a pro,” he said. “I don’t know how, but as far as media and my peers and different tour people and sponsors, it was a whirlwind and crazy busy. Obviously, that had a lot to do with how the industry got turned upside down. Now that the dust has settled, it’s time to go out and get the job done.”

Despite all the hubbub and all the shifting of anglers, Arey will not put any more pressure on himself to perform than he already does.

“I’ve been doing it for 10 years now, so I don’t feel like at this point I have anything to prove,” he said. “I have a job to do and I’ll go out and do it. I’m more into making sure my sponsors are happy and my family is taken care of. I’m not worried about how people think I fit in at B.A.S.S. vs. FLW.”

Arey said when the Elite Series invitation came his way, he took several factors into account, mainly how the added events on the Elite Series schedule would impact his family. He and wife, Emily, have two daughters under the age of 7.

“My wife has been my number one supporter since day 1, but I wanted to make sure that schedule wouldn’t be too hectic,” he said. “Like always, she was behind my decision 100 percent.”

He said the smaller field and B.A.S.S.’s media footprint, combined with feedback from his sponsors, made it an easy call.

“The pros far outweighed the cons,” he said. “With the payout structure, everything was a positive. I spent hundreds of hours on the phone over a two-week period because I wanted to get everybody’s perspective. It wasn’t an easy decision. I have always loved FLW, but in the end it was a no brainer.”

As experienced as he is, there will be a few things about his first Elite Series season that Arey isn’t accustomed to. The St. Johns River, which will host the season opener in early February, will be one of five venues on the schedule that Arey has no prior experience at. That doesn’t concern him as much as what the first back-to-back sequence – St. Johns River/Lake Lanier – will be like.

“Overall, with a couple more tournaments in the mix, one thing I’m not used to is FLW never had back-to-backs,” he said. “I’m already starting to prep tackle for that trip. Talk about two totally different worlds. That’s a day’s worth of rigging there.”

One other change will be the prohibition on landing nets in the Elite Series.

“The net is the biggest thing,” he said. “I’ve never been a fan of nets anyway and the reason is I stink at netting my own fish. I have had more bad luck than good luck with them. I think that’ll relax me more, honestly, and simplify it for me.”