BACK
Most Memorable Fish (FLW Tour) 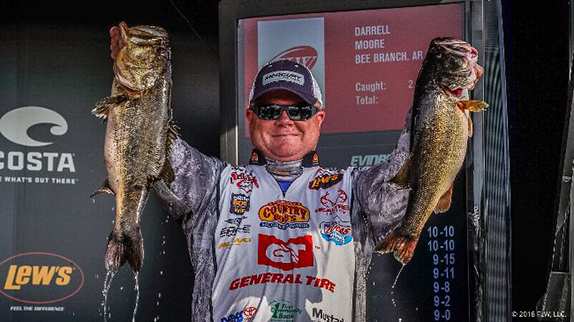 Mark Rose's big day-1 haul at Lake Okeechobee was keyed by a 6 1/2-pounder that he caught first thing in the morning.

Mark Rose had a difficult practice for the 2018 FLW Tour opener at Lake Okeechobee. Over the first 2 1/2 days, basically all he'd uncovered was one area where he could catch a bunch of run-of-the-mill keepers, and he estimated that the place would yield no more than 12 pounds over the course of a full tournament day.

"My whole focus going in there was to try to get the season off to a good start – if you have a good first tournament it can set the tone for the whole season and a bad one can put you in a whole you have to fish your way out of," said Rose, who'll compete on the Bass Pro Tour in 2019. "I knew that 12 pounds a day was only going to put me in the middle of the pack and that wasn't the way to get things started right.

"In the last hour of the last day of practice I went up north and I was throwing a swimming worm and caught two 3-pounders. They were nothing spectacular, but they were bigger than anything else I'd caught to that point and I decided I'd start the tournament there. I had a backup and if I could just get one 3-pounder there, that would put me up around the 13- to 14-pound mark, which was a lot better than where I would've been otherwise."

When he returned the next morning to begin day 1 of competition, he boated a 6 1/2-pounder within the first 15 minutes. That fish anchored a 24-pound stringer that put him in 2nd place and he went on to finish 3rd in the event. That finish was his high-water mark for the season en route to his first tour-level Angler of the Year title.

"When I caught that one right away, I got a feeling that it just might be a really good year. It did a lot for my mental game and it was a big key to the whole season. And, of course, it kept me in that area, and every bass I weighed for the tournament came off that same 100-yard stretch."

Following are accounts of the most memorable fish of the 2018 campaign from some other FLW Tour pros. 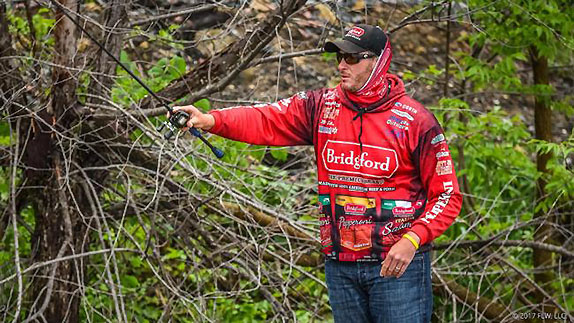 
Matt Stefan's most memorable fish of 2018 was a big spotted bass he lost at Lake Lanier.

"It was one at Lake Lanier and I actually never saw it. It happened on day 3 in the last hour and I was fishing a Keitech 3.3 swimbait on a Dirty Jigs Matt Stefan Guppy Head. I loaded up and I felt a bunch of big head-shakes. I was alongside a dock and the fish came out and went straight under the boat and I got it up to where it was probably 10 feet underneath. Then it took a bunch of drag and went back under the dock and ended up breaking me off.

"I'd caught a 4 1/2-pounder each day of that tournament and this fish dominated what those other ones did. I weighed 12 1/2 pounds that day and I weighed a 2-pounder, so that one would've made a big difference.

"I know it wasn't a striper because stripers will make a lot longer runs. This was just a bunch of massive head-shakes. I just wish I would've seen it."

"It was the last fish I caught at Logan Martin in the (Bassmaster) Open. I had four good ones in the livewell and one that I was really itching to cull. I knew if I got rid of that one I had a pretty good chance to win – little did I know that I already had enough to win at that point.

"There was a guy sitting on a spot I wanted to fish, so I went up the river and when I came back, the guy was gone. I pulled in there and made three casts and caught one on every cast. I was throwing a 3.8-inch Berkley Power Swimmer on a half-ounce jighead.

"That last fish gave me my final weight. When I swung it in, I looked over at my co-angler and said, 'I might've just won the tournament.''' 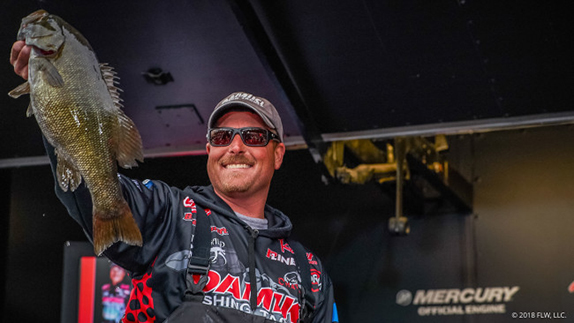 
Bryan Thrift was pretty certain he'd wrapped up the victory at Lake Cumberland after catching this 5-pound smallmouth on day 4.

"It was the last keeper I caught at Cumberland on the fourth day. It was probably about 2:15 (p.m.). Once I caught it, I was pretty sure I was going to win the tournament – I had the feeling that that one did it. I'd been talking all week about how I hadn't caught a 5-pounder and that smallmouth weighed 5-02 on my scale.

"I caught it on a small swimbait and it really wasn't that bad of a fight. I was catching all my fish on 8-pound P-Line, so I was playing all of them – even the 14-inchers."

"I caught a 4-pound spot at Lanier in the first 20 minutes of the first practice day and if I'd realized what a clue it was, it could've led me to a top-5 finish. It was on my River2Sea Worldwide Spoon and it came from the marina docks in the same area where (eventual winner) Bradley Hallman caught his giant bag of fish on day 1. I didn't try it until the last 2 hours of that day and it was lights out. The next day I caught 20 pounds there.

"On that practice day, I had three more big ones that followed the spoon and didn't eat it and I talked myself out of (going there to start day 1)."

"On the second day of the Forrest Wood Cup I started on a stretch and I was just fishing down it, and after about 10 to 15 minutes I caught one on a point on a buzzbait. It wasn't extremely big – maybe a 3-pounder – but it was a great start to the day. I'd only had six bites on day 1 and I wasn't really sure what to expect and when I got that bite early on, it was positive affirmation that it was going to happen for me.

There was really nothing special about the fish – it was kind of ho-hum. But it was an ice-breaker and it settled me down."